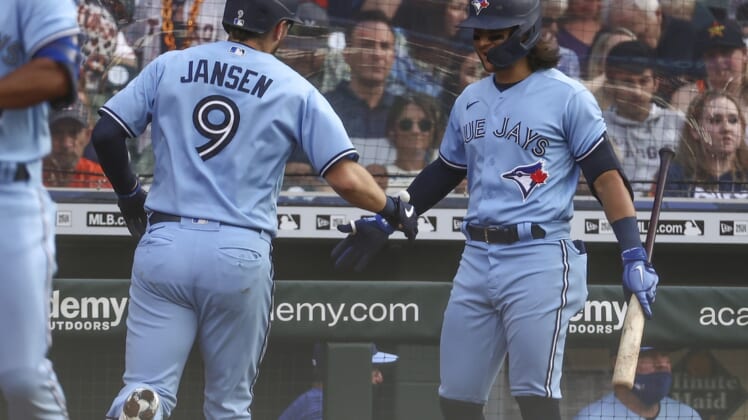 Cavan Biggio and Danny Jansen slugged home runs early before Marcus Semien did so late as the Toronto Blue Jays claimed an 8-4 road victory over the Houston Astros Saturday.

Biggio, Jansen and Semien helped Toronto to its 10th win in 15 games. Biggio socked a two-run blast to right field on the first pitch of his first at-bat against Astros right-hander Cristian Javier (3-1) for his third home run of the season and his first at Minute Maid Park. His father, Craig, belted 79 homers at Minute Maid Park during his Hall of Fame career with the Astros.

Jansen followed by homering for a third consecutive game an inning later leading off the third. The Blue Jays sent seven batters to the plate in that frame and stretched their lead to 5-0 when Houston native Randal Grichuk plated Semien and Vladimir Guerrero Jr. with a double to center.

Blue Jays left-hander Steven Matz (5-2) retired the first eight batters he faced before the Astros began to claw back with a pair of singles in the third inning and a pair of runs in the fourth, with Yordan Alvarez driving home Alex Bregman with an opposite-field home run to left, his sixth.

Alvarez added an RBI single in the fifth and Bregman (3-for-4, two runs) doubled and scored in the eighth to cut the deficit to 5-4, but Semien matched Bo Bichette for the club lead with his eighth homer, a three-run shot with two outs and two strikes in the ninth off reliever Joe Smith.

It marked a second consecutive shaky appearance for Javier, who rode a stretch of three consecutive scoreless starts into his previous outing against the Tampa Bay Rays on May 2. Javier had his streak of consecutive scoreless innings snapped at 21 in that start and labored with his control against Toronto, issuing a season-high four walks against eight strikeouts in 5 1/3 innings.