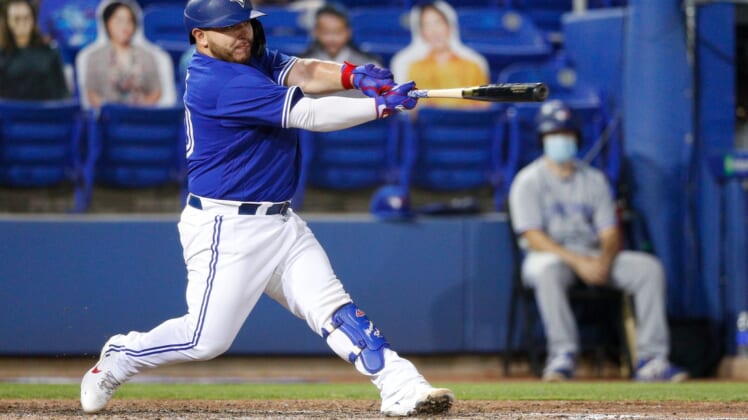 Teoscar Hernandez added a three-run homer, Bo Bichette had a two-run drive while Randal Gichuk and Lourdes Gurriel Jr. hit solo shots for Toronto in the opener of a three-game series.

Toronto left-hander Robbie Ray (1-1) allowed two runs, five hits with no walks while striking out five in 6 2/3 innings. He gave up one hit in the first six innings.

George Springer, who had his first hit as a Blue Jay with a first-inning single, reached first on catcher’s interference with one out in the third. Bichette followed with his seventh homer of the season, a drive to right center on an 0-1 cutter.

Toronto took a 4-0 lead in the fourth. Gurriel singled and scored when Kirk homered to center on a 3-0 fastball.

Jacob Webb allowed a single to Bichette, a walk to Vladimir Guerrero Jr. and the second homer of the season by Hernandez in the sixth. Hernandez was playing his first game since April 8 because of COVID-19 protocols.

Marcell Ozuna doubled and Albies hit his fifth homer of the season with two out in the seventh. Ryan Borucki replaced Ray after Travis d’Arnaud then double, but Borucki got the final out of the inning.

Borucki allowed a single and two walks to load the bases with one out in the eighth. Freddie Freeman lined an infield RBI single back to Borucki. Joel Payamps replaced Borucki and allowed Ozuna’s two-run single.

Gurriel hit his second homer this season against Tyler Matzek in the bottom of the eighth.