Toronto Blue Jays get jump on the Boston Red Sox, hang on for win 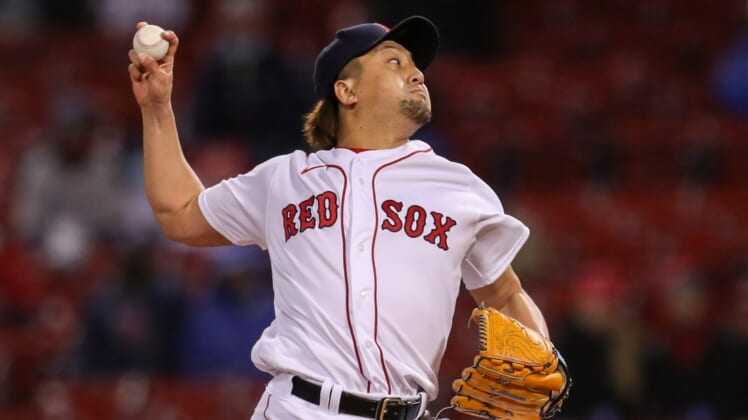 Vladimir Guerrero Jr. had an RBI single three batters into the game as the visiting Toronto Blue Jays started fast and held on for a 6-3 victory over the Boston Red Sox to split a quick two-game series.

Bo Bichette had an RBI single in a three-run second inning, and seven Blue Jays pitchers held back the Red Sox to end a three-game losing streak.

Rafael Devers doubled and drove in two runs for the Red Sox, while Xander Bogaerts homered and Marwin Gonzalez had a pair of doubles.

Boston lost for the third time in its last five games but still is tied with the Oakland Athletics for the best record in the American League at 12-7.

On a bullpen day, the Blue Jays got two scoreless innings out of starter Trent Thornton, who left with Toronto leading 4-0. The Jays’ fourth pitcher, Ryan Borucki (2-1) pitched two scoreless innings to earn the victory, while Anthony Castro recorded the last out for his first career save.

Guerrero’s first-inning RBI came before the Red Sox had recorded an out. Toronto increased the lead with some productive outs in the second inning as Lourdes Gurriel Jr. had a sacrifice fly for a 2-0 advantage and Cavan Biggio had an RBI ground out.

Bichette’s two-out RBI single made it a four-run lead during an inning when the Blue Jays worked two walks against Red Sox starter Garrett Richards (0-2). The Boston right-hander ended up allowing six walks over 4 2/3 innings, while giving up four hits with four runs.

The Red Sox started to work their way back into the game on their own run-scoring ground out in the fourth inning from Devers. Enrique Hernandez delivered an RBI double in the fifth just inside of third base to cut the deficit to 4-2.

Bogaerts’ home run to left in the eighth inning, his second of the season, came against Blue Jays right-hander Rafael Dolis and got Boston to within 4-3. But the Blue Jays added a pair of insurance runs in the ninth on RBI singles from Alejandro Kirk and Randal Grichuk.

The game was delayed 31 minutes at the outset by rain.