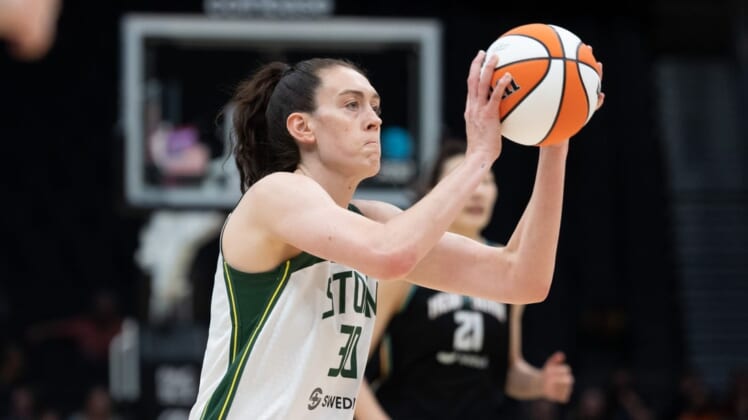 Seattle (11-7) won six of its previous seven games before an 85-77 loss its last time out, Saturday at home against Los Angeles. The Storm scored just nine points in the fourth quarter and were outscored by eight in the decisive period.

Stewart scored 28 points in the loss, pushing her league-best per-game average to 22.0, but could not jump-start Seattle in the final period.

“We can’t win scoring nine points (in a quarter),” Storm coach Noelle Quinn said. “The shots that we did take, I feel like they were rushed and contested.”

Stewart also cited a disparity in defensive rebounds, with Los Angeles grabbing 31 to Seattle’s 21. Overall, the Sparks had 41-26 rebounding advantage. On the season, the Storm rank next-to-last in the league with 24.3 defensive boards per game, while Las Vegas leads the WNBA at 30.2.

The 2020 MVP, A’ja Wilson, remains a key contributor for the Aces, grabbing 8.1 of her league-lead-tying 9.9 rebounds per game on the defensive end. She is coming off a 25-point, 11-rebound double-double in a 79-73 victory Monday at Los Angeles

The Aces (14-4) held Los Angeles to 38.4 percent shooting and overcame their own offensive woes. Five Aces average in double-figures for the campaign, but only Plum and Wilson scored more than nine.

Plum went for 29, giving her at least 20 points in seven of the last eight games.

The duo of Plum and Wilson are buoying Las Vegas’ league-leading offense at 90.5 points per game, with Plum averaging 20.7. Wilson ranks sixth in the WNBA at 18.7. Monday’s performance took that standard to another level, Aces coach Becky Hammon said.

“For Kelsey and A’ja to take the reins there, when we were a little battered and bruised in some other spots, was big,” she said.