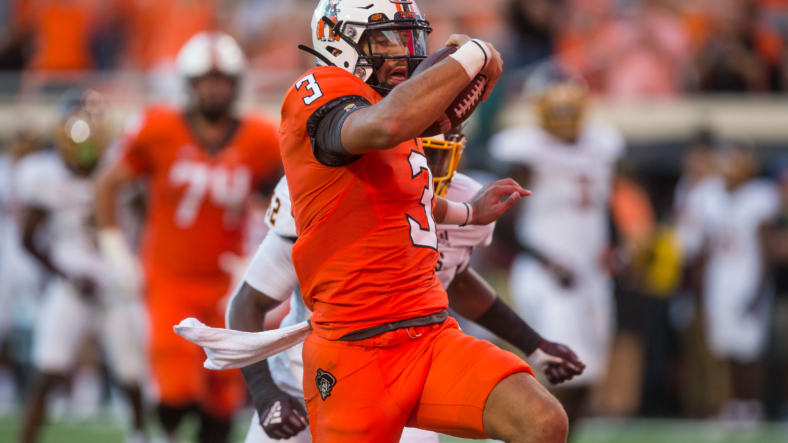 Thursday night kicked off what’s sure to be an exciting Labor Day weekend full of college football matchups across the nation. There were many games that took place, but only three teams ranked in the AP top 25 were in action on Thursday.

We have the top three takeaways from each game, and a bonus takeaway from an unranked game that was just too incredible to ignore.

Spencer Sanders is the real deal

Returning for the fourth season as the Oklahoma State Cowboys quarterback, Spencer Sanders started off his year with a bang.

According to ESPN, Sanders became just the second player in Big 12 history to tally 300 passing yards, three passing touchdowns, and two more rushing scored in a half. The first player to accomplish such incredible feats? None other than former Texas Tech standout Patrick Mahomes.

Sanders proceeded to finish the day with 406 yards, after completing 28-of-41 passes for 406 yards and four touchdowns through the air. He also carried the ball 11 times for 57 yards and two more scores. It was an all-around great effort for Sanders, as he led his team to a 58-point effort. Beating the Central Michigan Chippewas by just 14 points isn’t so impressive, and neither was their defense today. But Sanders was A-okay.

In the first Backyard Brawl since 2011, fans got an absolute show, pitting two former USC transfer quarterbacks against one another. The Pittsburgh Panthers may have emerged victorious over the West Virginia Mountaineers, but it was the college football fans who came away with the win in a back-and-forth battle to the very end.

The Mountaineers had former Georgia Bulldog J.T. Daniels under center, and Pitt trotted out Kedon Slovis. Despite Slovis arguably facing much more pressure, trying to fill the shoes of Kenny Pickett who went on to be a first-round pick, the senior quarterback managed to come away with the win.

In reality, both QBs were under pressure all day, Slovis was sacked five times, and Daniels went down three times. But it was Slovis who was able to create bigger plays, surrounded by fewer players who let him down.

The rivalry’s intensity was as strong as ever at Acrisure Stadium and the Mountaineers appeared to have control of the game, until the fourth quarter. Daniels thought he hit a wide-open Bryce Ford-Wheaton, only to have the ball bounce off his target’s hands, right into the hands of junior defensive back M.J. Devonshire for the pick-six. That essentially sealed the deal.

Daniels and the Mountaineers tried one more rally in the final seconds, where they almost completed a 4th-and-16 touchdown pass, but once again, the ball fell incomplete. Pitt 38-WVU 31.

Getting the call on short notice after their preferred starter Sam Hartman went down with an injury that has him sidelined indefinitely, redshirt freshman Mitch Griffis made his career start in college. Taking the field for the Wake Forest Demon Deacons, Griffis completed 22-of-30 passes for 283 passing yards and three touchdowns. Michael Kern came in with less than nine minutes to go to keep Griffis healthy heading into next week.

It may not have been the top competition, as Griffis was taking on a D-1 school, in the Virginia Military Institute Keydets. We’ll be more impressed if the 5-foot-11 Griffis can keep it up against tougher competition this season. It won’t be a big leap in talent next week with a trip to take on the Vanderbilt Commodores, but they’re at least an FBS school. Hartman is expected back before the end of the season, but for now Griffis did just fine. The bigger test comes in Week 4, against Clemson on Sept. 24.

We’re still trying to figure out what the South Carolina State Bulldogs punter was thinking here.

It was an incredible display of a lack of awareness. Maybe he just got lost with the wind hitting his hair, losing sight of where he was, or what he was doing. Usually when punting, you don’t run for 12 yards first. The general idea is to punt the ball when you’re still behind the line of scrimmage. That key idea of booting the ball behind the line of scrimmage was lost on this player.

The worst part, he was just seven yards away from the first down at the time of him punting the ball. Chances are, he would have been clobbered either way, but punting the ball, when you’re guaranteed to get a flag tossed? Guaranteed to lose, every time.