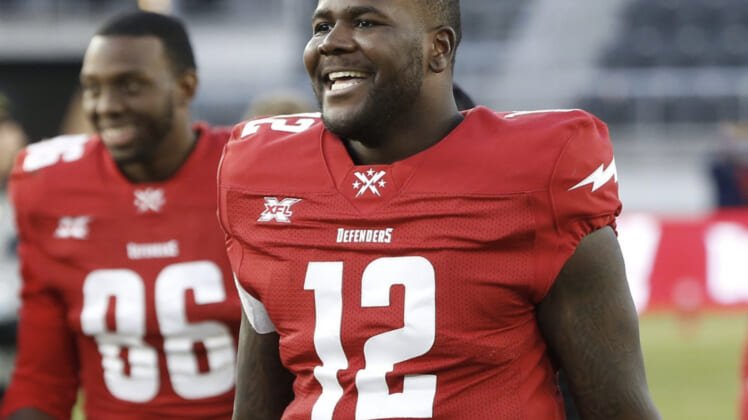 It’s finally here. The long-anticipated reboot of the XFL took place this weekend to a whole bunch of fanfare. It started with the D.C. Defenders taking on the Seattle Dragons Saturday afternoon.

In front of a packed house at Audi Field, former NFLer Cardale Jones vastly outplayed Brandon Silvers. Later in the day, the Houston Roughnecks took it to the Los Angeles Wildcats in a big way.

These are among the top takeaways from Week 1 of the XFL season.

Cardale Jones has it

There were some issues Saturday against Seattle. It was not perfect for this former Ohio State national champion. He held on to the ball too long and was under pressure at times, especially early.

Even then, Jones connected on a couple absolutely brilliant touchdowns. He finished the afternoon having completed 16-of-26 passes for 235 yards with two touchdowns and zero interceptions. Jones added 28 yards on the ground. In an attempt to prove that he belongs in the NFL, this former fourth-round pick showed out in a big way, helping DC to an impressive 31-19 win.

Former Georgia quarterback Aaron Murray was absolutely atrocious in Tampa Bay’s first-ever game Sunday afternoon. He threw two interceptions and was pulled from the game at times. Once Murray returned to the field, the mistakes followed him.

That’s just brutal stuff right there. All said, the former Kansas City Chiefs mid-round pick completed 16-of-34 passes in a 23-3 loss. Meanwhile, the Vipers’ defense was torched by New York’s Matt McGloin. Tampa is looking like a legit bottom feeder heading into Week 2.

Nick Holley, what a story

The XFL wants to brand itself as players taking to the field for the love of the game. During the Houston Roughnecks’ blowout win over the Los Angeles Wildcats Saturday evening, we got a first-hand glimpse of this.

Houston running back Nick Holley was among the many players interviewed during the game. The conversation quickly turned to the former Kent State star making a comeback after suffering three torn ACLs and a broken back.

What an absolutely amazing story here. It’s also what the XFL provides its players. A second chance. A third chance. The ability to recover from both off-field issues and injuries. Holley’s story is a prime example of this. Oh, and he put up four receptions for 50 yards in the 37-17 Roughnecks win.

Attendance could be an issue

We saw good crowds in Dallas, Houston and D.C. Unfortunately, that was not the case in New Jersey. In fact, The Meadowlands was nearly empty ahead of the Guardians taking on the Tampa Bay Vipers.

A total of 17,000 attended the initial game on Saturday with Houston’s game nearing 18,000. Not too shabby. And the fans were excited about the product. We’re just concerned that the larger-market teams are not going to draw well.

Nelson Spruse will be in the NFL

Having spent time with four NFL teams after a heralded career at Colorado, Spruse figures that his hopes of returning to the league were hanging on by a limb. That no longer appears to be the case. The 6-foot-1 pass catcher showed out in a big way during Los Angeles’ blowout loss to Houston on Saturday.

Spruse caught a whopping 11 passes for 104 yards on 15 targets, putting up one of the best individual performances of Week 1. He did so with a lackluster quarterback in Charles Kanoff tossing him the rock.

We’re highly intrigued to see how Spruse performs once starting quarterback Josh Johnson returns from injury. If he continues at this level, the receiver is looking at a multi-year NFL contract offer. That’s for sure.

Brandon Silvers is not the answer

On the other side of the ledger, this former Troy quarterback looked to be out of his element in the nation’s capital. Silvers threw two ghastly interceptions, one of which was returned for a touchdown. That changed the game on the dime in a 31-19 Dragons loss.

More so than the two picks, Silvers struggled big time with accuracy. He completed just over half of his 40 pass attempts, missing receivers on a consistent basis.

One now has to wonder whether B.J. Daniels is a better option under center for head coach Jim Zorn. Heck, maybe a trade for Defenders’ backup quarterback Tyree Jackson could be in the cards. After all, Cardale Jones is going nowhere.

The rules are legendary

We’re going to spend a lot of the NFL offseason talking about how that league can steal some of the XFL’s rules. Fans were excited about a new kickoff format that does not include gunners. Rather, players from each team outside of the kicker and return man lineup five yards from one another. The receiving team is at its own 30 with the kickoff team being at the 35. It adds another element to the kickoff and helps avoid serious special teams injuries.

Another intriguing thing is the instant replay system. The XFL is all about fan access. Some of it is too much. However, getting a first-hand view of the replay process is just tremendous. The instant replay official up in the booth looks at the play on a video monitor and explains his decision to the official down on the field. It’s all right there in front of us on television. This certainly is something the NFL should adopt.

Week 1 ended with a whimper

We had the Dallas Renegades ranked No. 1 in our initial power rankings heading into opening week. Unfortunately, Bob Stoops and Co. only real highlight of the game came during a sideline interview.

It’s not like the St. Louis BattleHawks were that much better in this one. The game was 6-6 after the first two quarters with signal callers Philip Nelson and Jordan Ta’amu combining for just over 400 yards on 70 attempts. That’s just ugly stuff right there.

We now have to rethink the rankings heading into Week 2. As of right now, it sure looks like the DC Defenders are the cream of the crop. Dallas’ performance in a 15-9 loss Sunday evening magnified that even further.