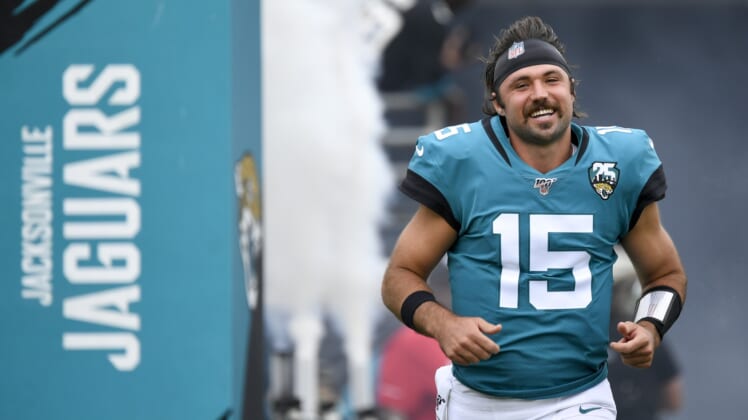 Week 8 represented the midway point of the NFL season for multiple teams. It also came just two days before what promises to be an active trade deadline around the league.

Both the New England Patriots and San Francisco 49ers remained undefeated in emphatic fashion. The Philadelphia Eagles also made a major statement in Western New York.

On the more negative side, Browns head coach Freddie Kitchens continued to prove that he’s in over his head while the Chicago Bears found a new way to lose.

These are among the top takeaways from Sunday’s Week 8 NFL action.

Freddie Kitchens proving to be a mistake

Even more so than the undefeated Patriots hosting a lesser squad on Sunday, there was no real confidence that first-year Browns head coach Freddie Kitchens could match wits with Bill Belichick. Now the defensive play-caller in New England, that came to fruition in more ways than one.

Kitchens and the Browns’ offense was overmatched schematically. The head coach didn’t put his mistake-prone skill-position players in the best situation to succeed. Too many third and longs against an historical defense. The end result was a 27-13 loss and a 2-5 record on the season. It’s looking more and more like Kitchens is in over his head in this role.

Major statement for the Eagles

Most skeptics did not give Philadelphia much of a chance heading into Buffalo to take on the 5-1 Bills Sunday afternoon. The Eagles had turned it over seven times in their previous two games, including giving the ball away four times in a blowout loss to the Cowboys last week.

Doug Pederson’s squad responded in a big way. Riding the electric play of rookie running back Miles Sanders (118 total yards) and a big game from fellow back Jordan Howard (96 rushing yards), the Eagles came out on top by the score of 31-13. It was a much-needed win for Philadelphia with outings coming up against playoff contenders in that of the Bears, Patriots and Seahawks over the next three games.

Now that Nick Foles has returned to practice, common logic seems to suggest that the Jaguars will turn back to their high-priced quarterback. However, their rookie sixth-round pick is making this hard. Minshew entered Sunday’s game having thrown 10 touchdowns compared to two interceptions.

He responded against a decent Jets defense in Week 8, completing 22-of-34 passes for 279 yards with three touchdowns, including this brilliant 70-yard score. Jacksonville outlasted the Jets by the score of 29-15 en route to moving to 4-4 on the season. Can the team possibly go back to Foles at this point? We’re not too sure. Minshew Mania is the craze in Duval.

It’s no longer Drew Brees and the guys

We saw it first-hand in New Orleans with the Saints winning all five games that Brees was sidelined to injury. This is not your parents’ Saints squad. Instead, it’s all about a stout defense and one of the game’s best rushing attacks. It also has the Saints looking like legit Super Bowl contenders.

New Orleans was expected to take care of the Arizona Cardinals at home on Sunday with Brees returning to action. That’s exactly what the team did in a blowout 31-9 win. With Alvin Kamara out a second consecutive game, Latavius Murray went for 102 yards on 21 attempts. The Saints’ defense got to the elusive Kyler Murray for three sacks and held Arizona to 40 yards on the ground. This team is absolutely legit.

Deshaun Watson and Co. save face

Following last week’s surprising loss to the Colts, there was an expectation that the Houston Texans would run roughshod over the Oakland Raiders at home on Sunday. That did not happen. Oakland vastly outplayed Houston through the majority of the game.

However, Watson and Co. came to play when it counted the most. Houston went 152 yards on its final two drives before kneeling on the ball, scoring touchdowns both times. This helped the team overcome a 21-13 deficit. For his part, Watson pulled off some heroics by completing 11-of-14 passes, including a game winner to Darren Fells late in the fourth. This win catapulted Houston to first place and might have saved its season in the process.

It’s simple. This fifth-year quarterback is no longer giving his team an opportunity to win football games. Taking on an equally pedestrian Tennessee Titans team on Sunday, the Buccaneers were in must-win mode. Winston failed at every turn.

One game after giving the ball away six times, Winston turned it over another four times in a 27-23 loss to the Titans. That included a game-sealing interception into the hands of Titans cornerback Logan Ryan and another fumble in the second half. Buccaneers head coach Bruce Arians indicated after Winston’s last performance that a similar outing might lead to his benching. We’re now wondering if the impending free agent is done as a starter in Tampa.

Cooper Kupp did a few things

The Los Angeles Rams needed their most explosive receiver to step up in London on Sunday. As has been noted a lot in the recent past, quarterback Jared Goff is in the midst of a regression. He needs big-time players to step up, even against a winless squad like the Cincinnati Bengals.

That’s exactly what Kupp did on Sunday. He racked up seven catches for a career-high 220 yards, including this brilliant 65-yard touchdown on a trick play. It was enough for Los Angeles to overcome a bad Bengals team by the score of 24-10. The Rams will need more of this if they want to remain relevant in the NFC West.

Aaron Rodgers, Packers at the top of their game

Fresh off a six-touchdown performance last week against the Raiders, Rodgers was up to his old tricks against the Chiefs in Kansas City Sunday evening. The MVP candidate made play after play in a 31-24 win over the Patrick Mahomes-less Chiefs. All said, Rodgers completed 23-of-33 passes for 305 yards with three touchdowns and zero picks.

Rodgers has found the key to first-year head coach Matt LaFleur’s system and is running with it. He’s playing the best football we’ve seen from the future Hall of Famer in years. With an elite-level Packers defense, this has to be considered a scary proposition for opposing NFC teams. It really has been something to behold.

On the brink in Mile High

The Denver Broncos’ defense did enough against Jacoby Brissett and the Indianapolis Colts on Sunday, holding them to just over 300 total yards and 15 points. Unfortunately, it was the offense that failed to step up once again.

Up 13-12 late in the fourth quarter, defensive-minded head coach Vic Fangio opted to punt from inside Indy’s 45-yard-line with 1:48 less. The Colts ultimately drove down the field on the following possession for the game-winning field goal. This led to veteran quarterback Joe Flacco calling out the conservative nature of the Broncos’ coaching staff.

At 2-6 following yet another brutal close loss, the Broncos’ season is over. One now has to wonder if there’s going to be a mutiny within the locker room. Flacco is not one to call his coaches out. Denver just traded Emmanuel Sanders. What might happen between now and Tuesday’s trade deadline?

Some questioned San Francisco’s 6-0 record heading into Sunday’s game. Outside of a blowout win over the Rams, it was easy to conclude the 49ers had played a soft schedule. That was in no way the case at home against a Panthers squad that had won four consecutive. From the start, these 49ers proved they were legit Super Bowl contenders in one of their most dominant performances in decades.

San Francisco came out on top by the score of 51-13. Nick Bosa was absolutely unstoppable on defense, recording three sacks and this insane interception. Tevin Coleman scored four touchdowns. Jimmy Garoppolo missed on just four of his 22 pass attempts and hit Emmanuel Sanders for the game-opening score. It was a statement win for the NFC’s sole remaining undefeated team.

Even as Trubisky led Chicago down the field for a potential game-winning field goal later in the final stanza, there was a nagging feeling that Eddy Pineiro would miss.

That was the culmination of an ugly overall performance from Chicago’s offense and special teams in a narrow 17-16 home loss to the Chargers. We’re not too sure where head coach Matt Nagy and Co. go from here, but it’s not going to be pretty. Maybe a change at quarterback is in the offering.

If Detroit wanted to have any chance of competing for a wild card spot in the second half of the season, it had to take out a lesser Giants team at home on Sunday. In a game that saw the Lions’ defense give up four touchdown passes to rookie quarterback Daniel Jones, it was another signal caller who stepped up to the plate.

Continuing what has been a career season, Matthew Stafford was throwing the ball all around Ford Field. He completed 25-of-32 passes for 342 yards with three touchdowns and one interception. This included a 41-yard score to Kenny Golladay that pretty much put the game away early in the fourth. Now at 3-3-1, the Lions are still very much alive. They have the team MVP to thank for this.

Three consecutive defensive plays. Three forced turnovers. Game over. That’s pretty much all way have to say about the defending champ’s 27-13 win over a mistake-filled Cleveland Browns team on Sunday. What New England continues to do on defense is just insane.

It picked off Baker Mayfield once and sacked him five more times. The Pats also forced two Nick Chubb fumbles and held Cleveland to 3-of-12 on third-down opportunities. Notice how we didn’t even mention Tom Brady here? He managed the game with a workmanlike performance. That’s all the undefeated Pats need from their veteran right now. And it has fans in New England thinking about a perfect regular season.