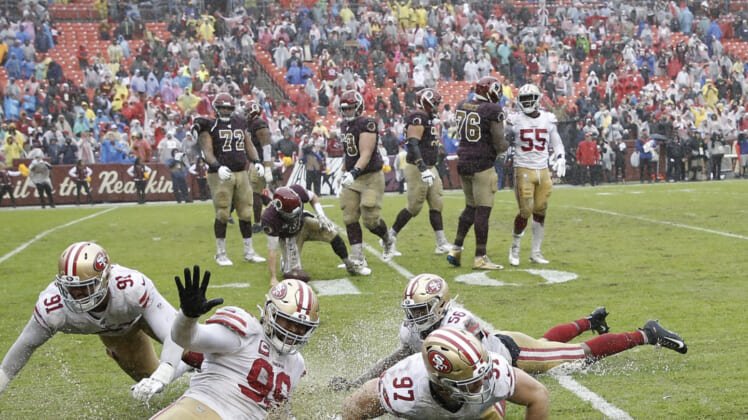 The Baltimore Ravens went into Seattle and took out a red-hot Seahawks team in a statement win on Sunday. The San Francisco 49ers remained the NFC’s only undefeated team with a shutout win over the Redskins in D.C.

On the other side of the ledger, the Atlanta Falcons’ season-long struggles continued while the Houston Texans put up a bummer of a performance against the Indianapolis Colts.

These are among the top takeaways from Sunday’s Week 7 NFL action.

Fresh off two ho-hum wins against the Steelers and Bengals, Baltimore headed to the Pacific Northwest to take on the Seattle Seahawks on Sunday. This was already being billed as a statement game for the Ravens. They did not disappoint.

The recently-acquired Marcus Peters made a personal statement early on with a pick-six of Russell Wilson. Lamar Jackson continued to dazzle, both through the air and on the ground in putting up 259 total yards. Baltimore then put the game away with a fumble return for a touchdown to ice things. Now at 5-2 following a 30-16 win over Seattle, these Ravens look like real threats in the AFC.

It took some time for the former NFL MVP to get into rhythm in first-year head coach Matt LaFleur’s offense. Rodgers had tallied just eight touchdowns in six games heading into Week 7. That changed big time against the Oakland Raiders on Sunday.

Rodgers completed 25-of-31 passes for 429 yards with six total touchdowns and zero interceptions in a 42-24 win. Statistically speaking, it was the best performance of his Hall of Fame-worthy career. It also led to Rodgers making history as he navigated his team to a 6-1 record heading into the midway point of the season. Things are going swimmingly for Mr. Rodgers and his Pack right now.

Fresh off the best two-game span of his Vikings career, Cousins busted out more of his new tricks against the division rival Lions in Detroit on Sunday. He led Minnesota to 38-plus points for the second consecutive game, throwing four touchdowns and zero picks while tossing the ball around the field to the tune of 337 yards.

More than anything, Cousins’ ability to connect with Stefon Diggs loomed large in a 42-30 win. Diggs caught 7-of-8 targets for 142 yards. For his part, Cousins is completing 76% of his passes for nearly 1,000 yards with 10 touchdowns and one interception over the past three games. He also now has Minnesota at 5-2 after the team struggled to open the season.

If the Jacksonville Jaguars were to have any say in the AFC South moving forward on the season, they had to dispose of the winless Cincinnati Bengals on Sunday. That’s exactly what we saw from the team in a 27-17 win over the Bengals.

That included a pick-six of Andy Dalton with the game on the line late in the fourth quarter. All said, Jacksonville’s defense forced four turnovers in a brilliant all-around performance. This defense also held the Bengals to negative two rushing yards in an all-time great first-half performance. Now 3-4 on the season, Jacksonville is not yet done.

Fresh off an upset win over the Kansas City Chiefs last week, Bill O’Brien and the Texans had to be feeling good about themselves heading into Sunday’s AFC South outing against the Indianapolis Colts. It did not go according to plan.

MVP candidate Deshaun Watson put up his worst performance of the season, throwing two key interceptions. Meanwhile, Colts quarterback Jacoby Brissett picked apart Houston’s defense to the tune of 326 yards and four touchdowns in a 30-23 win. The Texans had an opportunity to move two games ahead of Indy in the win column. Instead, the team now finds itself in second place heading into Week 8.

Los Angeles entered Sunday’s action at 2-4 on the season and in must-win mode against another pedestrian team in that of the Tennessee Titans. After making the game close late in the fourth quarter, the Chargers found yet another way to lose.

Down just 23-20 after overcoming a double-digit deficit, it looked like the Chargers were on the brink of a game-winning touchdown. They had second-and-goal from inside the one with mere seconds left. That’s when former holdout running back Melvin Gordon fumbled the ball, leading to yet another horrible loss for the Chargers. More so than Gordon’s fumble, the decision by head coach Anthony Lynn to go with him instead of Austin Ekeler will stand out. Ekeler had put up 125 total yards compared to Gordon’s 32 before that final snap. Ouch!

The weather played a huge role for the NFC’s sole remaining undefeated team on Sunday. Jimmy Garoppolo and San Francisco’s offense managed just nine points and 282 total yards against one of the worst defenses in the NFL in that of the Redskins in D.C. However, that’s not the story here. Instead, it’s all about what has now become an historically good defense.

San Francisco held Case Keenum to 50 net passing yards. It has now given up 98 net passing yards over the past two games. Heck, the 49ers have yielded 10 total points over their past three games. Nick Bosa, Dee Ford, DeForest Buckner and Arik Armstead are absolutely dominant up front. Kwon Alexander and Fred Warner might be the best linebacker tandem in the league. Meanwhile, the Richard Sherman-led secondary is freakishly good. Championship-caliber stuff.

Bills break out of early funk

Buffalo found itself as resounding 15.5-point home favorites against the winless Miami Dolphins on Sunday. It was certainly a trap game for a Bills squad that was looking to go 5-1 for the first time since 2008. At least initially, it looked like Buffalo was going to be victims to one of the biggest upsets of the NFL season.

Miami held a 14-9 lead heading into the second half. That’s when the defense stepped up. Tre’Davious White intercepted Ryan Fitzpatrick at the goal line with Miami driving for a potential two-score lead. Buffalo would ultimately score a touchdown on the ensuing possession. It also scored a touchdown in the fourth quarter after White forced a fumble to put the game away. It’s this ball-hawking and dominant defense that has Buffalo as legit contenders heading into the midway point of the season.

Yet another win for Kyler Murray and the Cardinals

When Arizona started the season out 0-3-1, it looked like much of the same for the long-downtrodden organization. Murray was in over his head as a rookie starting quarterback. Kliff Kingsbury’s offense had yet to click. That’s now changed altogether. Arizona entered Sunday’s game against the New York Giants having won two consecutive and then took care of business against the Giants in Jersey.

This game did not feature the eye-opening numbers we’ve seen from Murray recently. He completed just 14 passes for 104 yards. However, it was the performance from Chase Edmunds (126 rushing yards, three touchdowns) and Arizona’s defense that made the difference in a 27-21 win. Now at 3-3-1 on the season, Arizona finds itself as a budding playoff contender. Crazy stuff.

Wheels completely off in Atlanta

Whether it was Devonta Freeman’s frustration or an inability to even slow down what had been a struggling Rams offense, Dan Quinn and the Atlanta Falcons were an absolute mess. When the clock struck zero in Atlanta, the Falcons were on the losing end of a 37-10 blowout loss.

The much-maligned Falcons defense allowed Jared Goff to throw for 267 yards with two touchdowns. Unfortunately for the Falcons, it didn’t get too much better on the other side of the ball. Former MVP Matt Ryan exited in the fourth quarter with an ankle injury and was seen in a walking boot. Now at 1-6 on the season, questions will continue to come up regarding Quinn’s status. It’s really bad in Hotlanta right now.

We’re not sure if it’s possible for the Bears to add a starter-caliber signal caller ahead of the Oct. 29 trade deadline. What we do know is that Mitchell Trubisky is not the answer under center in the Windy City. The third-year quarterback entered Sunday’s game against the New Orleans Saints having thrown three touchdowns in four games. He was downright dreadful throughout the afternoon, leading to Bears fans booing the former top-three pick.

Trubisky tallied 251 yards on a ridiculous 54 passing attempts, putting up most of his numbers in garbage time when the Bears found themselves down 36-10. Now at 3-3 on the season, one has to wonder if the Bears will look to make a move. The likes of Ryan Fitzpatrick, Marcus Mariota and Nick Mullens might be available.

Cowboys get off the schneid

Dallas entered Week 7 having lost each of its past three games. Head coach Jason Garrett was clearly on the hot seat. The time was now to come up with a win and salvage their season. That’s exactly what the Cowboys did at home against the division-rival Philadelphia Eagles Sunday night.

The Cowboys’ defense forced four turnovers of Carson Wentz and Philadelphia’s offense. Meanwhile, Dak Prescott completed 21-of-27 passes for 239 yards in a near-flawless performance. The end result was a dominating 37-10 win over Philadelphia and sole possession of first place in the NFC East.

Separation made in the NFC

By virtue of their win Sunday night, the Cowboys have come out on top in all three of their divisional games to date. They are now one game ahead of Philadelphia with the Giants and Redskins riding up the rear. The New Orleans Saints’ blowout road win over the Chicago Bears changes the dynamics for both teams. New Orleans is now a full game ahead of Carolina in the NFC South. Chicago? Well it falls three games behind Green Bay in the win column.