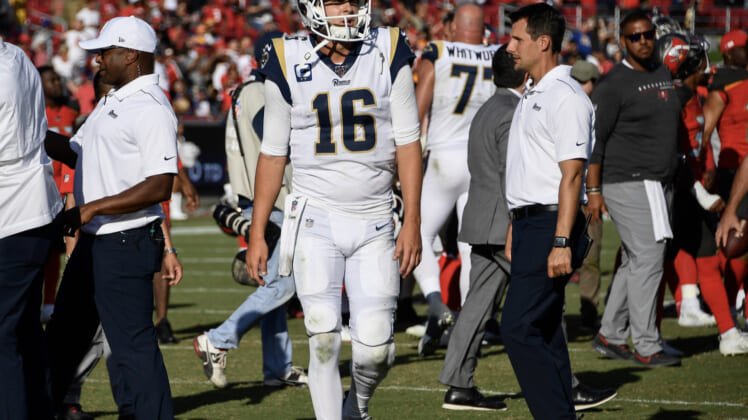 Sunday’s action around the NFL could be defined with one word. Weird. A game Buffalo Bills defense manhandled Tom Brady and the Patriots’ offense in a narrow loss. The Los Angeles Rams gave up 55 points to Jameis Winston and the Tampa Bay Buccaneers.

Meanwhile, the Cleveland Browns made a major statement on the road in Baltimore. And to conclude the day’s action, the New Orleans Saints put up one heck of a defensive effort in a win over the previously undefeated Dallas Cowboys.

These are among the to takeaways from Sunday’s Week 4 NFL action.

Browns with a major statement victory

Pretty much in must-win mode heading into Week 4, the Browns were facing some major pressure after a 1-2 start to the season. Head coach Freddie Kitchens’ play-calling has been questionable. A narrative surrounding Baker Mayfield being overrated existed big time. At least for one game, the Browns put this all behind them.

Dominating from pretty much the start in Baltimore, these Browns came away with a 40-25 victory. That included the team coming alive to the tune of 30 points in the second half. Mayfield tossed the rock for 342 yards. Nick Chubb added an 88-yard touchdown run. Kitchens was in rhythm calling plays. Cleveland’s defense forced three turnovers. It was a season-salvaging win for the Browns heading into next week’s Monday night matchup with the undefeated 49ers in Santa Clara.

Los Angeles, we have a problem

Abandoning the run early on. Dropping back to pass north of 70 times. Seeing your quarterback turn it over four times. A Hall of Fame caliber defensive coordinator looking overmatched. You name it. Murphy’s law was on display for the Rams against the Tampa Bay Buccaneers on Sunday.

Looking to go 4-0 and as major home favorites, Los Angeles tripped over itself at every turn. It allowed 27 first downs and 464 total yards in a 55-40 loss. Goff was as mistake prone as we’ve seen throughout his career, tossing three interceptions and clinching the loss with a fumble late in the final stanza. Meanwhile, head coach Sean McVay’s game plan was questionable. Now at 3-1, Los Angeles must take on the Seahawks and undefeated 49ers over the next two weeks.

We can choose to focus on Josh Allen giving the game away before leaving with an injury. After all, the second-year quarterback turned it over three times. We can also elect to focus on Frank Gore joining rarefied air in a stellar all-around performance. That’s all fine and dandy. There are some interesting stories to follow in Buffalo as the season progresses.

However, Sean McDermott’s defense looked like an absolute juggernaut against Tom Brady and the Patriots in a narrow 16-10 loss. Buffalo gave up all of 224 yards and 11 first downs. Brady put up 150 yards on 39 attempts, finishing with the lowest quarterback rating he’s posted during a winning outing in his career. These Bills are absolutely legit on defense. It was something to behold Sunday afternoon in Western New York. Now at 3-1 on the season, it’s time for the offense to step up. If so, we could be looking at a surprise playoff appearance in Buffalo.

A lot of the talk has surrounded Jay Gruden’s future in D.C. We now have to openly wonder whether Dan Quinn’s job is safe. The Falcons lost against a mediocre Titans team at home on Sunday, allowing Marcus Mariota to throw three first-half touchdowns. Matt Ryan and Co. turned the ball over in plus territory for the third time in four games.

When all was said and done, Atlanta dropped another mistake-filled game by the score of 23-10. It is now 1-3 on the season with the team’s only win coming against an injury-plagued Eagles squad back in Week 2. It’s really ugly in Hotlanta right now.

This must be prefaced by noting that the Indianapolis Colts were without stars T.Y. Hilton, Darius Leonard and Malik Hooker in this game. Even then, the Raiders’ ability to overcome two consecutive blowout losses in a road game on Sunday tells us something about this team’s character.

Derek Carr was at the top of his game, completing 21-of-31 passes with two touchdowns and zero interceptions. Oakland’s defense stepped up and forced two turnovers. That included a game-clinching pick-six from Erik Harris in a 31-24 win. Now at 2-2 on the season, Oakland is in much better position than most would have initially thought a quarter of the way through the season.

This is not what other NFC contenders wanted to see. Once Drew Brees went down with a long-term injury in Week 2, most figured the Saints were about to take a major step back. Teddy Bridgewater struggled after replacing Brees that week. He followed it up by leading New Orleans to a road win against the Seattle Seahawks.

The Saints now took out a previously undefeated Cowboys team at home on Sunday night. It wasn’t a great performance from the offense (four field goals). However, the Saints are finding a different way to win. Running the ball and defense. Dak Prescott and a high-flying Cowboys offense was limited to just 257 yards an 10 points in the 12-10 Saints win. These are not the Saints of yesteryear. They are scarier. And once Brees returns, watch out.

This isn’t the same old Lions

Primarily due to one game-changing play, the Lions were unable to remain undefeated in an otherwise hotly-contested affair against the Kansas City Chiefs. In no way does this mean Detroit is like previous versions of the long pedestrian organization. We saw so many good things Sunday against a legit Super Bowl contender.

More than anything, Detroit’s offensive line dominated on the ground. This unit helped the Lions go for 186 yards on 35 attempts. Outside of a lost fumble, Matthew Stafford played largely flawless football with three touchdowns and zero interceptions. Sure the Lions were burnt early and often by Patrick Mahomes. But who hasn’t been? Despite the narrow 34-30 loss, these Lions proved they can be a threat in the NFC North.

It was somewhat surprising to see Seattle as mere 4.5-point favorites against a Cardinals team that’s won all of four games since the start of last season. We get that it’s an NFC West matchup. Even then, it doesn’t look like people have a great opinion regarding Pete Carroll’s squad.

At least for one day, that took a backseat. Seattle manhandled Arizona, winning by the score of 27-10. Jadeveon Clowney made his first real impact since a blockbuster preseason trade with a pick-six. Seattle’s defense got to Kyler Murray for four sacks. Russell Wilson played another flawless game. Now at 3-1 on the season, Seattle will host the Rams on Thursday night. That should be a blast.

Kyle Allen gets it done, again

This second-year quarterback is now 3-0 as a starter in the NFL. All three wins have come on the road. It’s a simply amazing stat given that Allen is a former undrafted free agent. Meanwhile, former No. 1 overall pick Cam Newton has lost each of his past eight starts for the Panthers.

Allen was nowhere near as good as we saw last week. However, he did everything possible to lead Carolina to an upset 16-10 win over Houston. The youngster completed all but 10 of his 34 pass attempts without throwing an interception. That mistake-free performance enabled the Panthers’ defense to lock down Deshaun Watson and Co. Now at 2-2 following an 0-2 start under the injured Newton, we have to wonder if there’s going to be a sense of urgency to rush Newton back.

Let’s nip this in the bud right now. Despite completing 27-of-36 passes for 233 yards, Kirk Cousins was his normal below-average self in a 16-6 loss to the Bears in Chicago — dropping to 5-27 as a starter against winning teams. He was also sacked six times, as the Vikings’ offensive line proved itself to be overmatched.

In a game that the Bears played without stud linebacker Roquan Smith and saw Mitchell Trubisky leave early, the picking was ripe for a road win. Instead, Minnesota’s offense fell flat on its face. It’s been an all-too common theme under head coach Mike Zimmer. At 2-2 on the season, it’s also pushing Minnesota back to an average pack of .500 teams.

Chargers get out of early-season funk

Taking on a winless Dolphins team in South Beach that had been outscored 133-16 in its first three games, most expected Los Angeles to get right. It did not start out great for a Chargers squad that lost each of the previous two games. In fact, Miami took its first lead of the season early on.

From there, it was all Philip Rivers and Co. Los Angeles scored 30 of the game’s final 33 points. Rivers went for 310 yards with two touchdowns. Defensively, the Chargers held an anemic Dolphins offense to 46 total yards in the second half. Los Angeles could not afford to drop to 1-3 in the AFC West. While it is still two games behind the Chiefs, this was a huge win.

At this point, the Jaguars are going to have a hard time turning back to Nick Foles once he comes off injured reserve. Making his third career start, this rookie sixth-round pick went into Mile High and led his Jaguars to a comeback win over the Denver Broncos.

It might not have been the prettiest affair. Jacksonville put up 93 net yards and was down 17-6 at the half against a winless team. That’s when Minshew mania picked up at a fever pace. He ultimately led the Jaguars to 20 of the game’s 27 second half points in a comeback win. That included an absolutely insane touchdown. With his Jags now in a four-way tie for first place in the AFC South at 2-2, we’re not betting against this youngster. He’s proven it time and again over the past several weeks.