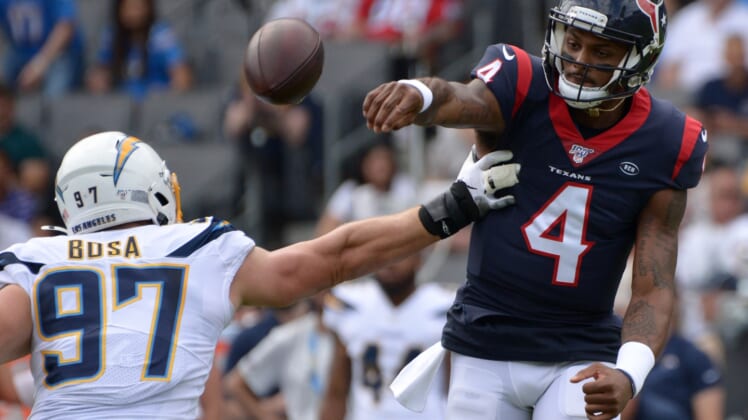 The Dallas Cowboys and New England Patriots moved to 3-0 in blowout fashion against lesser teams on Sunday. More surprisingly, both the San Francisco 49ers and Buffalo Bills are also 3-0 on the season.

On the other end of the ledger, the Denver Broncos are now 0-3 following a double-digit loss to yet another undefeated team in the Green Bay Packers. Vic Fangio’s squad is pretty much done after just three games.

As it relates to the Packers, they joined San Francisco with another dominating defensive performance under coordinator Mike Pettine.

These are among the biggest takeaways from Sunday’s Week 3 NFL action.

Atlanta, we have a problem

Fresh off a narrow win over the injury-depleted Philadelphia Eagles last week, the Falcons seemingly had a plus-level matchup against the Colts in Indianapolis on Sunday. That never came to fruition. Atlanta’s defense was burned early and often by Colts quarterback Jacoby Brissett, who completed 21-of-27 passes for 218 yards with two touchdowns in the first half alone.

Atlanta did make a game of it with 14 consecutive points to open the second half. However, it was not enough for the team to overcome struggles earlier in the game. Now at 1-2 on the season, one really has to wonder what the future holds for Dan Quinn as Atlanta’s head coach.

Domination was the name of the game early on for the undefeated Bills at home against the Cincinnati Bengals on Sunday. The first half saw Sean McDermott’s squad outgain Cincinnati 257-77. That span included the Bills putting up 18 first downs compared to two for the Bengals.

Buffalo was able to overcome a second half run by the Bengals that saw the team down 17-14 in the final stanza. Josh Allen led a seven-play, 78-yard touchdown drive to take the lead before Buffalo’s defense picked off Andy Dalton to pretty much end the game. These Bills are now 3-0 for the first time since 2011.

Coming off a narrow loss to the Packers in Green Bay last week, Minnesota had a darn good matchup against a lesser Oakland Raiders team on Sunday. Cousins and Co. more than atoned for last week’s loss in a blowout home win over Oakland.

The embattled quarterback completed 15-of-21 passes for 174 yards without an interception. Meanwhile, Dalvin Cook went for 110 yards on 16 attempts — averaging 6.9 yards per rush in the 34-14 victory. It sure looks like Minnesota has righted the ship after struggles earlier in the season.

The San Francisco 49ers sit at 3-0 for the first time since 1998 after beating Mason Rudolph and the Pittsburgh Steelers on Sunday. It was not a great overall performance from Kyle Shanahan’s squad, as the team turned it over a whopping five times. Even then, a vastly improved 49ers defense helped the team overcome the mistakes in a 24-20 win.

Led by Nick Bosa, Dee Ford and Richard Sherman, the 49ers held Pittsburgh to 11 first downs and 239 yards of offense. Outside of this huge catch by JuJu Smith-Schuster, the Steelers had 163 yards on 50 plays. Now at 3-0 heading into their early bye, the 49ers are legitimate playoff contenders.

Patriots are in a league of their own

We’re actually surprised that the Jets were able to score a touchdown against what has been a dominant New England defense thus far this season. After all, the Pats had given up a combined three points in the first two games. In no way was it enough for the Jets to keep this game close.

Tom Brady surpassed Drew Brees on the all-time touchdown list. Josh Gordon was making plays that we have not seen from the NFL’s former leading receiver in years. When all was said and done, New England came out on top by the score of 30-14. The team has now outscored its opponents 106-17 through three games. Good luck to the rest of the NFL.

Of those teams, an argument can be made that the Packers are the most impressive. Though, Dak Prescott and the Cowboys might have something to say about that. Meanwhile, the San Francisco 49ers are 3-0 for the first time in over two decades and boast a top-five defense. It’s looking to be a wide-open NFC race heading into what will be the quarter point of the season next week.

Outscored 102-10 in their first two games, the Dolphins were three-touchdown underdogs heading into Sunday’s game against the Cowboys in Dallas. Though, the team was much more competitive with Rosen replacing Ryan Fitzpatrick under center. At the very least, for the first half.

Before things got somewhat out of hand in the second half, Miami found itself down just 10-6 at the half. Rosen looked decent behind a makeshift offensive line. Unfortunately for the Dolphins, that competitive spirit took a backseat to yet another blowout loss with Dallas scoring 21 unanswered second-half points to win 31-6. The Fins have now been outscored 132-16 through three games. Ouch.

Humiliating loss for the Buccaneers

Tampa Bay was clear favorites at home against the New York Giants on Sunday. It was coming off a big win against the Carolina Panthers and was set to take on a rookie quarterback in Daniel Jones who was making his first ever NFL start. Up 28-10 heading into halftime, the Bucs absolutely blew this game in every possible way.

They allowed Jones to complete 23-of-36 passs for 336 yards with two touchdowns and zero picks. Meanwhile, Jameis Winston was sacked four times and threw yet another costly interception with the Bucs up three early in the fourth quarter. All of this came with Giants stud running back Saquon Barkley sitting out the second half to injury. When all was said and done, Tampa Bay dropped this game 32-31 in front of its home crowd after missing the game-winning field goal in the final moments. Yuck.

Only six teams since 1980 have earned a playoff spot after starting 0-3. That’s the uphill climb Vic Fangio and the Broncos are facing after a 27-16 loss to the Packers in Green Bay. While the game got a bit more competitive as it continued, Denver simply could not get out of its own way.

Joe Flacco threw an interception and lost a fumble. Rookie tight end Noah Fant legit had the ball stolen from him by Jaire Alexander. When all was said and done, Denver’s loss on Sunday pretty much ended any playoff aspirations. It’s now a lost season in Mile High after just three games. That’s not what John Elway and Co. had envisioned when they traded for Flacco and hired the respected Fangio.

When Demarcus Robinson is torching your defense, you know there’s very little chance to stop this potent Chiefs offense. When Patrick Mahomes puts up nearly 300 yards in one half of football, it seems that resistance is futile. That’s the situation a previously undefeated Ravens team found itself in against the Chiefs on Sunday.

Despite his best efforts, Lamar Jackson could not keep pace with Mahomes. It resulted in a hard fought 33-28 Chiefs win. For his part, the reigning NFL MVP completed 27-of-37 passes for 374 yards with three touchdowns. He’s still at an historical pace through three weeks.

Packers defense is a force

If Green Bay ever gets it together on offense under first-year head coach Matt LaFleur, this team will end up being legitimate Super Bowl contenders. Heck, they might already be after starting the season with a 3-0 mark.

The Packers’ defense did the heavy lifting in a 27-16 win over Denver on Sunday. This unit recorded six sacks of Joe Flacco, including three from Preston Smith. Green Bay also forced three turnovers and held the Broncos to 4.2 yards per play. Now, through thee games, the Packers are yielding an average of less than 12 points per. Is that good?

The Seattle Seahawks had to be feeling good about their chances at home against the Drew Brees-less Saints on Sunday. Already 2-0 on the season and taking on a backup quarterback in Teddy Bridgewater, Seattle was a heavy favorite to win. It didn’t come close to turning out that way.

New Orleans scored a touchdown on a punt return and on defense en route to taking a 33-14 lead before Seattle narrowed the gap in the fourth quarter. Despite their best efforts, the Hawks were not able to complete the comeback in a game that saw big play after big play from the visiting team. Shockingly, Seattle outgained New Orleans 515-265 in the losing effort.

Houston’s offensive line held up to the tune of two sacks on Watson against the likes of Joey Bosa and Co. on Sunday. That performance enabled the young quarterback to do his thing in a surprising 27-20 road win.

Watson completed 25-of-34 passes for 351 yards with three touchdowns and zero interceptions. That included two touchdown strikes to little-known tight end Jordan Akins. If the Texans’ offensive line is able to hold up like we saw Sunday, this team could be extremely dangerous moving forward.

With Cam Newton sidelined for Sunday’s game against the Arizona Cardinals, we had no idea what to expect from this second-year player. After all, Allen had thrown a combined 31 career regular-season passes heading into Week 3. Well, he responded with one of the most surprising performances of the weekend.

Allen completed 19-of-26 passes for 261 yards with four touchdowns and zero picks. He was aided by Christian McCaffrey, who went off for 188 total yards on 27 touches in the 38-20 win. We’re not ready to call it a quarterback competition in Carolina, but the Panthers seemingly have a keeper in Mr. Allen.

Matt Patricia is finally starting to make his mark in Detroit. Taking on an injury-depleted Eagles team on the road Sunday, the Lions’ defense did everything asked of it en route to a 27-24 win. That included getting to Carson Wentz for three sacks and five hits.

Offensively, Matthew Stafford played a near-flawless game in completing 18-of-32 passes for 201 yards with a touchdown and zero interceptions. It might not have been sexy, but the Lions are now one of eight undefeated teams heading into Week 4. Not too shabby.

Freddie Kitchens outclassed, appears to be in over his head

Results were mixed for this rookie head coach over the first two games of the season. Kitchens and the Browns were absolutely blown out by the Tennessee Titans in Week 1 before beating an injury-ravaged Jets team last week. But make no mistake about it, Kitchens is in over his head in his new role.

The longtime assistant was outclassed and out-coached by Sean McVay on Sunday evening. That included this absolutely brutal call on fourth and nine with the game on the line. His plan on offense has proven to be weak. The Rams and defensive coordinator Wade Phillips exposed this. With games against the Ravens, 49ers, Seahawks and Patriots over the next month, things need to change rather quickly. Sunday’s 20-13 loss to Los Angeles magnified this further.