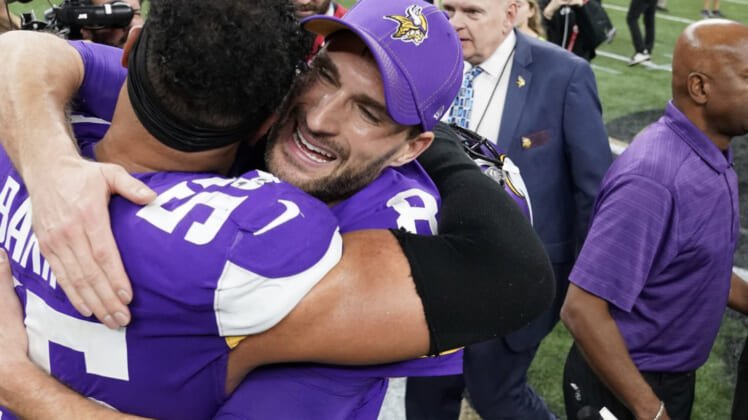 With the stage set for next week, we check in on the top takeaways from Sunday’s NFC Wildcard Playoff action.

Cousins was dynamic with the ball in his hands, completing 19-of-31 passes for 242 yards and the game-winning touchdown in overtime. Thus ends any narrative surrounding the long-embattled quarterback.

Cousins stepped up in the biggest game of his career, on the road and in the playoffs. It was a stage he had failed to perform in the past. At least for now, the high-priced quarterback has silenced his critics.

No plan for Alvin Kamara

It’s a continuation of how we saw New Orleans use Kamara during the latter part of the regular season. The young back did not attempt more than 14 rushes in any of the final nine games.

We’re now openly wondering whether something is wrong with Kamara. If not, Saints head coach Sean Payton only has himself to blame for Sunday’s loss to the Vikings.

Adam Thielen’s return is huge for the Vikings

Now set to take on the top-seed San Francisco 49ers in the divisional round, Minnesota is already big-time underdogs. The good news here is that the Vikings have Thielen back after he missed Week 17’s action and another five regular-season games to injury.

Thielen responded by leading the Vikings in receptions (seven), targets (nine) and receiving yards (129). It was a huge performance from Thielen against an elite Saints secondary.

With their top receiver back in action, the Vikings will now look to take advantage of struggling 49ers cornerback Ahkello Witherspoon en route to earning an NFC Championship Game appearance. Sunday’s outing added more intrigue to this.

Is Taysom Hill a starting quarterback?

This young signal-caller entered Sunday’s game having thrown all of 13 regular-season passes in his young career. However, the former undrafted free agent from BYU has also been an important part of the Saints’ offense. That did not change in the wild-card game.

Hill led New Orleans with 50 rushing yards. He threw a 50-yard pass and caught another touchdown. It’s this electric play-making ability that has us openly wondering whether Hill has a future in the NFL as a starter.

Whether that’s with the Saints or another team, it should end up being an interesting offseason storyline.

Injuries too much for Eagles to overcome

What was a major storyline for the NFC East champs during the regular season came back to haunt Philadelphia once again on Sunday. Star quarterback Carson Wentz exited the game with a concussion. Fellow stars Miles Sanders and Brandon Graham also suffered injuries.

Remember, the Eagles entered Sunday’s game against Seattle without right tackle Lane Johnson as well as receivers Alshon Jeffery and Nelson Agholor, to name a few.

Despite a strong effort, this proved to be too much for the Eagles to overcome at home. After all, the team was relying on a 40-year-old quarterback in Josh McCown making his NFL playoff debut.

Russell Wilson back at it

Postseason success and Russell Wilson seem to be synonymous at this point. The Super Bowl winner entered Sunday’s game against Philadelphia having accounted for 24 touchdowns and 11 interceptions while boasting an 8-5 record in 13 career playoff games.

Including this absolute dime to rookie D.K. Metcalf, Wilson was back up to his old tricks against the Eagles. He completed 18-of-30 passes for 325 yards with a touchdown while adding a team-high 45 yards on the ground. It was a downright dynamic performance.

It was horrible to see Philadelphia’s expensive quarterback go down to a concussion early on Sunday. We have no idea how this game would have turned out if Wentz were able to remain on the field.

Heck, we have no idea how the past three seasons would have ended if Wentz were able to complete each one. And that’s the problem here.

Can we call Wentz injury prone after he suffered a concussion? Probably not. But add in the back and ACL injuries, and there has to be some concern within the Eagles’ organization right now. That’s magnified by the fact that Philly just signed Wentz to a whopping four-year, $128 million extension.

With two road teams coming out on top Sunday, the divisional round of the playoffs in the NFC is set. Kirk Cousins and the Minnesota Vikings will head to Levi’s Stadium to take on the San Francisco 49ers Saturday afternoon. Meanwhile, the Seahawks get to head to Lambeau to take on the Packers on Sunday.

Both home teams will be favored here. For the Vikings, that affords Cousins yet another opportunity to end a career-long narrative that he comes up small in big games.

Meanwhile, Russell Wilson has proven at every turn that he can make up for a lacking supporting cast in Seattle to compete with the big boys. Will he be up for the task in the Mecca of the football world?