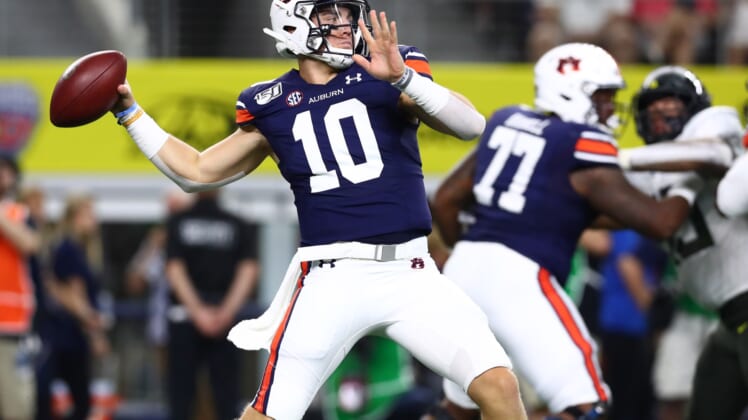 Did Saturday’s loaded slate of college football Week 1 action come close to filling you with a sense of satisfaction and warmth? After a long offseason, we sure hope it did.

Certainly, coming weekends will provide more drama and intrigue, but there was enough on the plate Saturday to slake even the most intense thirst for college football.

Early on, Georgia transfer Justin Fields made his presence felt almost immediately as the Buckeyes overpowered FAU. A bit later on, Florida State proved last year was no fluke with a brutal loss to Boise State. In the evening, the Oregon Ducks and Auburn Tigers made us wait until the bitter end to see who would win the first ranked-versus-ranked matchup of the 2019 college football season.

These are the top takeaways from college football this Saturday.

The Ohio State offense is going to be lethal

Justin Fields gives the Buckeyes an element that was not present last year when Dwayne Haskins was running the offense: His explosive ability to run wild. That was evident on the game’s opening drive when he romped 51 yards for a touchdown.

Before you could even blink, the Buckeyes had a 28-0 lead in the first quarter. Fields showed off his arm, passing for three touchdowns in that opening quarter. All told, he finished with 295 yards and five touchdowns. Running back D.K. Dobbins had a strong outing, totaling 113 yards and a touchdown on just 22 touches. Eight different Buckeyes caught at least one pass.

Now, it wasn’t all sunshine and roses. Fields experienced some growing pains, and that will continue — especially against better defenses. Yet what we saw from him and Ohio State’s offense Saturday was evidence enough: The Buckeyes will have a very dynamic, dangerous offense in 2019.

Not the start Nebraska was looking for

Heading into his second season at Nebraska, head coach Scott Frost was bullish about his team’s chance to take a huge leap following a disappointing 2018 campaign. While the Cornhuskers got the win over South Alabama Saturday, they cannot feel good about their performance.

Sophomore quarterback Adrian Martinez was wildly inaccurate at times. He threw a ghastly interception and didn’t throw a touchdown while completing just 13-of-22 attempts for 178 yards. Perhaps even more troubling is the fact that Nebraska didn’t even manage 100 total yards on the ground.

If not for two defensive touchdowns and a punt return for touchdown, Frost and Co. were in line for an opening-day loss against a team that — on paper, anyway — was far inferior.

Just when it looked like Florida State was ready to shrug off its brutal 2018 season, the Seminoles reminded their fans why they are tough to watch right now.

Early on, it was all FSU as James Blackman dealt strikes and helped the Seminoles build a 21-6 lead in the first quarter. Florida State built up that lead even more, going up 31-13 late in the second quarter. The new-look offense looked to be humming under the guidance of first-year offensive coordinator Kendal Briles.

Then, the wheels fell off the hype train as fast as you can snap your fingers. Florida State didn’t score again, running a grand total of 29 plays for 51 yards in the second half. Boise State surged, rattling off 23 unanswered points to win by five, 36-31. Just an awful, unacceptable performance from Willie Taggart’s team to open the season.

The Cyclones had just three points at the half, and at the end of regulation it was all knotted up at 13-13. A couple of late touchdowns in crunch time saved Iowa State from being upset, but the outcome was in doubt the entire game.

A big reason the Cyclones are struggling right now is that they’re having a hard time replacing two of last year’s top stars. David Montgomery and Hakeem Butler combined for 2,691 yards and 22 touchdowns last season. Both are on NFL rosters now, having been picked up in the third and fourth rounds, respectively.

Clearly, both Butler and Montgomery are dearly missed by Matt Campbell’s Cyclones, who struggled to consistently produce on the offensive side of the ball Saturday at home against Northern Iowa.

It was a good day for former Georgia quarterbacks. Like Fields, Jacob Eason landed on his feet as the starter of another major program. Though the competition wasn’t stout Saturday against Eastern Washington, Eason gave Huskies fans reason to hope this year will be loaded with offensive highlights.

Completing 27-of-36 passes for 349 yards with four touchdowns and zero interceptions, Eason spread the ball around well. He connected with eight different receivers in the game and looked very comfortable executing Bush Hamdan’s offense.

The Tua/Jeudy duo is peerless

Alabama’s high-octane passing offense got off to a slow start Saturday against Duke, but once Tua Tagovailoa and Co. started clicking it was over.

Demonstrating his signature accuracy, Tagovailoa completed 26-of-31 attempts for 336 yards and four touchdowns. He was particularly potent when targeting Jerry Jeudy — one of the nation’s best receivers — connecting 10 times for 137 yards and a spectacular score in three quarters of work.

‘Bama’s running game never got going against Duke, but it didn’t need to with Tagovailoa and Jeudy leading the way through the air. Look for this to be a common theme throughout the 2019 season as these two stars establish themselves as the nation’s best quarterback/receiver duo.

Former Clemson recruit Hunter Johnson was named the starting quarterback just before Saturday’s crucial came against Stanford. We highlighted this former five-star recruit before Week 1, because if he lives up to the hype Northwestern could be even more dangerous this year than it was last year when it won the Big Ten West.

Well, it’s too early to say he’s a complete bust, but Johnson’s debut against Saturday went about as poorly as you can imagine. He was replaced by TJ Green at one point early, but then Green was hurt and unable to return to the game. The team’s only option at that point, Johnson completed just 6-of-17 passes for 55 yards with no touchdowns and two interceptions.

Then, the icing on the cake of his terrible day: Johnson fumbled the ball with under a half a minute remaining, and Stanford scored a defensive touchdown to seal the win.

The Vols are just putrid

Tennessee lost to Georgia State Saturday to open the season with a thud. The Panthers were awful last season, going 2-10. They probably won’t win too many games this year, either. But for one day, Georgia State was clearly the superior team as the Vols imploded in front of their die-hard fans in Knoxville.

Like we’ve seen in recent years, the Volunteers beat themselves, turning the ball over three times and losing the turnover battle by two. The turnover fest started on the game’s opening drive, as Ty Chandler fumbled the ball away, leading to a touchdown on Georgia State’s next possession.

Things only got worse for the Vols, who are still a complete and utter mess in Jeremy Pruitt’s second year at the helm.

The LSU offense looks a heck of a lot different this year. The RPO (run-pass option) that so many teams have embraced is now a central aspect of what the Tigers are doing under offensive coordinator Steve Ensminger. Following a solid 2018 season, Joe Burrow is clearly embracing this change and appears destined to have a huge 2019 campaign.

In the first half alone Saturday against Georgia Southern, Burrow completed all but four of his 24 attempts, passing for 253 yards while tying a school record with five touchdowns. He barely played in the second half and finished with 278 yards passing.

Granted, Georgia Southern is in no way comparable to what Burrow will face against SEC foes. Yet it was very encouraging to see just how comfortable he is in this new offense.

Oregon has quite a potent offensive roster, with Justin Herbert as the centerpiece. Yet on Saturday night against Auburn, Herbert was without many of his key weapons.

As the game progressed, Oregon saw its top two running backs exit with injuries, adding to the tally of top playmakers who were unavailable. Still, Herbert put together a rock solid performance against a very good Auburn defense that features one of the nation’s most intimidating front fours.

Herbert completed 28-of-37 passes for 242 yards with one touchdown and zero interceptions. He should have had another touchdown, but receiver Bryan Addison dropped a dart in the back of the end zone. That mistake, along with a few others, doomed the Ducks to lose their season opener.

Bo Nix has that special something

Heading into Saturday night’s prime-time matchup against Oregon, a ton of pressure rested on the shoulders of Bo Nix, who was the first true freshman quarterback to start for the Tigers since 1946.

Early on, the pressure got to him. He threw a couple of awful interceptions , completed just 6-of-18 passes and was extremely skittish in the pocket in the first half.

Yet when the Tigers needed their quarterback to step up, Nix answered the call in a big way. He burned Oregon’s defense with a quick-strike touchdown to Eli Stove in the third quarter. Then, with nine seconds left in the game, down by one point, he connected with Seth Williams on a 26-yard game-winning touchdown to propel the Tigers to victory.