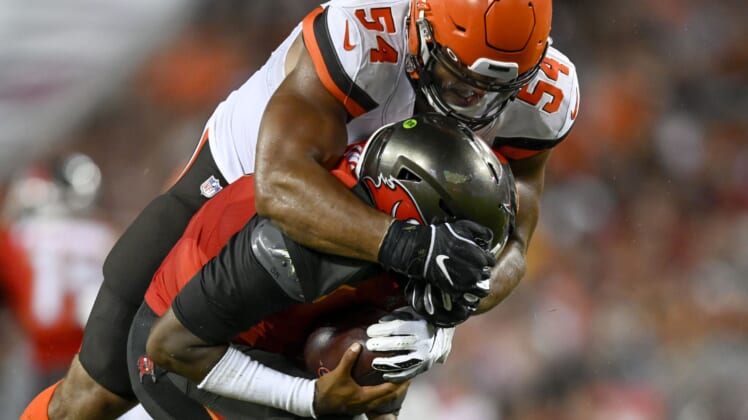 Just two games took place Friday night as the NFL preseason chugged along, but there was plenty to take away from the action.

First, the Tampa Bay Buccaneers hosted the Cleveland Browns down in Florida. Then a bit later the Detroit Lions hosted the Buffalo Bills in the Motor City. Both NFL preseason games offered highlights and lowlights as players did everything in their power to earn roster spots.

This is what we learned from the two NFL preseason games Friday night.

Cleveland’s front four is going to be a problem

The Browns have an incredibly loaded defensive front four, and that unit was on full display early Friday night against Tampa Bay. On the Bucs’ first offensive possession, Jameis Winston was sacked two times in a row — first by Olivier Vernon, who overpowered Demar Dotson, and then again by Sheldon Richardson.

The boo birds came out in force after seeing Tampa Bay’s offensive line collapse like wet cardboard. And it only got worse — or better, depending on which team you root for — from there.

The Browns feature one of the most dangerous defensive lines in football. The starting lineup of Myles Garrett, Larry Ogunjobi, Richardson and Vernon is going to make a lot of offenses look really bad this year. It sure did on Friday night.

Detroit gets hit hard by the injury bug

Injuries are a part of football. That’s a fact. It’s never easy to stomach, and it’s especially difficult when players get injured in preseason games. Unfortunately for the Lions, two of their top starters went down against Buffalo in the first half.

First, it was starting inside linebacker Jarrad Davis.

He’s the heart and soul of Detroit’s defense, and the Lions will be in a bad way if he’s out for any extended regular-season action.

Then, in the second quarter starting center Frank Ragnow got his leg tangled up under a falling body. He wasn’t putting any weight on his right foot and was unable to leave the field under his own power.

Brutal injuries for a team that cannot afford losing these key starters.

Last season, the Buccaneers were atrocious in coverage. They gave up the most yards per attempt in the league (8.2) and allowed 34 passing touchdowns. Though it was against a Browns offense that didn’t have its top receivers, what Tampa Bay did against Baker Mayfield was impressive, indeed.

Mayfield completed just 10-of-26 passes for 72 yards with an interception. More importantly, some of his incompletions were due to extremely tight coverage down the field, with five of them being broken up by defensive backs.

This is the kind of play the Bucs need to see every week if they are going to remain competitive in the quarterback-heavy NFC South.

Lions have plenty of offensive firepower

Matthew Stafford finally played for the first time this preseason on Friday night as the Lions hosted the Bills. It went well.

Rookie tight end T.J. Hockenson has been receiving a ton of praise throughout the summer, and he showed us why with Stafford slinging the pigskin. Hockenson caught three passes for 52 yards and showed real chemistry with his starting quarterback.

Stafford distributed the ball nicely, connecting with seven different receivers on 12-of-19 passing for 137 yards. He also threw an absolute dime to running back Ty Johnson for a touchdown.

All told, the Lions have to be fairly happy with how their starting offense looked aside from a few hiccups. Assuming Kerryon Johnson takes another step as a running back this season, this unit has plenty of big-scoring potential.

When Winston has time to throw and can let things develop down the field, he leads a lethal passing attack. When he doesn’t have time to throw and opposing defenses crash the party in the backfield, bad things happen.

What we saw Friday night as the Bucs hosted the Browns was sobering. It foreshadowed what could be another very difficult season for the fifth-year quarterback.

Winston was sacked five times by Cleveland, which far too often had guys running free at the quarterback. The offensive line was a veritable turnstile, and it wasn’t moving bodies in the run game either. This is exactly what Winston does not need to deal with in 2019.

If Frank Gore isn’t a first-ballot Hall of Famer, he’s not going to have to wait long to get into Canton. Already an NFL legend, this 36-year-old has nothing left to prove to anyone.

Yet Gore was Buffalo’s workhorse during the first half against Detroit Friday night. Showing the kind of heart that has made him one of the league’s most respected players, Gore played this preseason game like it was the damn Super Bowl.

Gore ripped off eight rushes for 57 yards. In a preseason game. Just incredible.

What’s even more remarkable about his performance is that he got banged up on a late hit out of bounds, yet came back to keep playing and ran the ball effectively afterward. Gore has the type of presence that can make a huge impact on a young team, and we expect him to do just that in 2019.