Top storylines for Week 4 of the NFL preseason 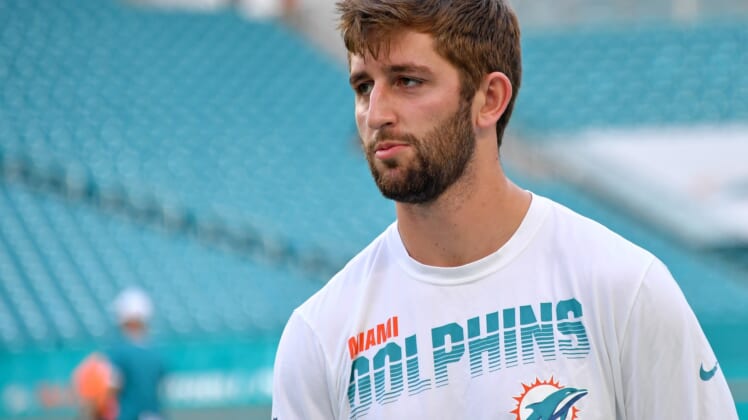 The final week of the NFL preseason is largely about teams finding out who will fill out the bottom end of their 53-man rosters. It’s no small thing given that north of 1,100 players will hit the waiver wire days after Thursday’s slate is complete.

There’s legitimate backup quarterback battles all around the NFL, primarily in both Los Angeles and Northern California as the Chargers and 49ers do battle in Santa Clara.

Over in the AFC, we’re more than intrigued to see how the quarterback situation will play out in South Beach. Will the Dolphins give Josh Rosen the chance he’s earned thus far this summer?

These are among the stop storylines for Week 4 of the NFL preseason as all 32 teams take to the field on Thursday.

Redskins head coach Jay Gruden has already named Case Keenum as their starting quarterback for Week 1. This despite the fact that Haskins has completely outplayed him during the preseason. There’s no real reason for Washington to throw Keenum out there Thursday against the Baltimore Ravens.

This means that Haskins should see at least two quarters of action. It will be an opportunity for the rookie first-round pick to end the preseason on a high note. If that were to happen, Gruden might have a quick hook on Keenum come the regular season.

For the first time in ages, it looks like other teams will be calling up the Browns about potential trades for players that won’t make their final 53-man roster. This tells us a story of a general manager in John Dorsey who has built up a deep and talented team. With playoff expectations being the name of the game in Cleveland, Dorsey and Co. will have some major roster decisions.

Cleveland’s starting defensive line is set. After that, there’s a multitude of players battling for spots. Former third-round pick Chad Thomas has been dealing with a head injury in his second season in the NFL. That’s left the door open for the likes of Chris Smith, Anthony Zettel and Wyatt Ray to make noise. Cleveland also picked up wide receiver Braxton Miller off waivers. He’ll be given a chance to prove his worth in extensive action with the Browns’ backups Thursday. How he performs could tell us what we need to know about Cleveland’s last roster spot or two at receiver after the team released Jaelen Strong.

Moving on from Andrew Luck

It’s now officially official. The Indianapolis Colts will begin the post-Luck era Thursday evening after his abrupt retirement this past weekend. The team has handled this shocking news about as best as one could hope. Things change when reality hits on the field.

Sure Jacoby Brissett is highly unlikely to play against Cincinnati Thursday night. But it’s about a whole heck of a lot more than that. How do the Colts look from a body language standpoint without their franchise quarterback? Will the team rally behind the remaining faces of the franchise? Albeit a meaningless game, all eyes will be on the Colts this week.

Former undrafted free agent Tim Boyle has vastly outplayed DeShone Kizer thus far in the preseason. The youngster is completing 61% of his passes with five touchdowns and zero interceptions. He was nearly flawless last week against the Oakland Raiders.

Despite Boyle’s performance, it’s not a foregone conclusion that he’ll lock down the No. 2 spot behind Aaron Rodgers. Kizer is still only 23 years old. Green Bay has exhausted both capital and time on the former Notre Dame standout. It will be interesting to see how playing time is allocated between the two Thursday night against the Kansas City Chiefs.

Is there a legit quarterback controversy in Nashville?

Titans head coach Mike Vrabel won’t say it. There has not been a lot of talk about Ryan Tannehill potentially competing with the struggling Marcus Mariota for Tennessee’s starting job. But based on how bad Mariota has been this summer, one has to wonder if there’s something to it.

Mariota enters this season having put up 24 touchdowns compared to 23 interceptions over the past two seasons. He’s completing just 50% of his passes and averaging 4.4 yards per attempt thus far in the preseason. Tannehill has been much better. With Mariota unlikely to go Week 4 against the Bears, Tannehill will likely have a chance to narrow the gap between the two. If nothing else, it could open up the possibility of Tannehill replacing Mariota at some point early in the season.

Third-year player David Moore and rookie D.K. Metcalf are both suffering through injuries that will cost them the start of the regular season. This is a less-than-ideal scenario for a Seahawks team that has to navigate through the 2019 season without recently-retired former Pro Bowl receiver Doug Baldwin.

It also opens up the possibility of other lesser-known players stepping up. Even with Russell Wilson and the Seahawks’ starting offense set to sit Thursday, we’re intrigued to see how these other players. That includes rookie mid-round pick Gary Jennings, who has struggled thus far in the preseason.

Given the backup quarterback situations around the NFL, all eyes will be on Levi’s Stadium in Santa Clara Thursday evening. Veteran Cardale Jones is battling with impressive rookie Easton Stick to be the Chargers’ No. 3 quarterback. Both will see extensive action against the 49ers. There’s a chance the loser of this quarterback competition could be traded.

The same thing can be said in San Francisco where Nick Mullens and C.J Beathard are battling to be Jimmy Garoppolo’s No. 2. Head coach Kyle Shanahan might have said recently that the team plans on keeping three quarterbacks. We still don’t see that coming to fruition. Specifically, Mullens would be a hot commodity on the trade block if the 49ers decide to go in that direction. Both will see action against Los Angeles.

It might now be at the point that Dolphins head coach Brian Flores simply can’t afford to go with Fitzpatrick over Rosen. For some reason, the first-year head coach has held Rosen back this preseason after Miami yielded a second-round pick in a trade for him back in April.

Simply put, Rosen has vastly outplayed Fitzpatrick during the preseason. He’s a much higher-upside quarterback, one that could help expedite the Dolphins’ rebuild rather than going with a washed veteran. A solid performance by Rosen against the Saints could lead to Miami finally making the decision to start him Week 1.

The focus in Pittsburgh has rightfully been on Ben Roethlisberger, James Conner and JuJu Smith-Schuster as the team’s new triplets on offense. Though, youngsters Mason Rudolph and James Washington deserve some press. The two made sweet music with one another last week against Tennessee.

Now that the Steelers are going to rest their starters against Carolina Thursday night, we can expect this former Oklahoma State duo to play a whole lot. Specifically, Washington has a chance to earn some major playing time as a sophomore. We’re intrigued to see him continue to grow into a larger role.

On the roster bubble

LeSean McCoy will be sitting out Buffalo’s preseason finale Thursday. This should give impressive rookie third-round pick Devin Singletary an opportunity to push him off the roster come Week 1. That’s especially true with how good free-agent signing Frank Gore has looked this summer.

In Washington and Minnesota, two former first-round picks might have their final opportunities to prove they are worth rostering. Redskins receiver Josh Doctson is firmly on the roster bubble. He’s not going to play Thursday. If other younger Redskins receivers step up, it could spell doom for Doctson’s career in D.C. Meanwhile, fourth-year Vikings receiver Laquon Treadwell could be on the outside looking in. How will he look in extensive action against Buffalo? There’s a lot riding on this week for the first-round bust.