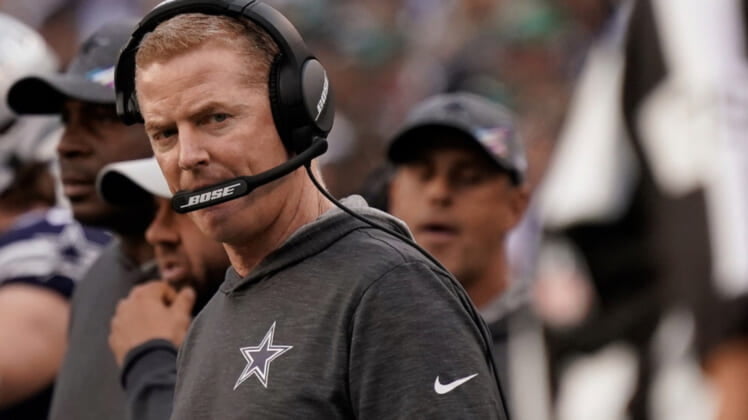 Week 7 acts as a bridge between the early part of the NFL schedule and the mid-way point. Heading into late October, contenders will separate themselves from pretenders.

It also comes right on the heels of the NFL trade deadline. Fresh off making a blockbuster deal for Jalen Ramsey, can the Los Angeles Rams end their three-game losing streak against a bad Falcons team?

Over in the AFC, the Oakland Raiders look for their third consecutive win against a red-hot Green Bay Packers team. Meanwhile, the Denver Broncos have a real opportunity to remain in the hunt with the Kansas City Chiefs on “Thursday Night Football.”

Here, we look at the top-10 storylines for NFL Week 7.

It’s pretty shocking to realize that the Denver Broncos could pull to within one game of the Kansas City Chiefs with a home win on Thursday night. Denver lost its first four before coming out on top over the past two weeks. Meanwhile, a disastrous run defense has led to Kansas City finding itself in the midst of a two-game losing streak after a 4-0 start to the campaign.

Given their struggles on offense, it seems absurd to believe that the Broncos could keep flight with Patrick Mahomes and the Chiefs. That’s until we realize Mahomes is battling an ankle injury and the Broncos’ defense has given up all of 13 points during their two-game winning streak.

Rams look to stem the tide

Jared Goff looked like a wide-eyed rookie in a blowout 20-7 loss to the San Francisco 49ers last week. He put up less than 60 net passing yards, as the Rams tallied 101 total yards after a game-opening touchdown drive. Los Angeles has now lost three consecutive for the first time under Sean McVay and finds itself 2.5 behind San Francisco in the NFC West.

There could be some tonic on the horizon. Los Angeles has an opportunity to get back in the win column against a Falcons team that’s 1-5 and has yielded an absurd 87 points over the past two games. It could also have the recently-acquired Jalen Ramsey on the field take on Julio Jones out of the gate. That should be fun.

Big test for the Saints in the Windy City

We’re fully expecting the Chicago Bears’ defense to come out of its bye on fire after a horrible loss to the Oakland Raiders in London back in Week 5. This unit must continue to step up given the struggles from Chicago’s offense and Mitchell Trubisky’s questionable status under center.

That’s going to make Sunday’s game at Soldier Field especially difficult for a Saints squad that has won four consecutive since Drew Brees exited to injury. New Orleans is coming off yet another solid defensive performance. However, it scored just 13 points in a seven-point win over the Jacksonville Jaguars. Is Teddy Bridgewater going to be up for the task in what could be his final start before Brees returns?

There’s absolutely no reason to believe that the winless Miami Dolphins can go into Buffalo and take out the Bills. That has to be seen as the reality of the situation, especially after Miami has been outscored by a combined margin of 180-42 in its first five games and will start Ryan Fitzpatrick under center. Meanwhile, Buffalo boasts the NFL’s fourth-best scoring defense.

Despite all of this, there’s some out there who don’t see the Bills as legitimate playoff contenders. That starts with struggles from Josh Allen under center. Buffalo will look to make a statement in dominating the league’s least-talented team. Anything short of that will lead to renewed questions about whether this team is a fraud.

Raiders come out of bye as real contenders

Among the most surprising stories of the NFL season has been the performance of Jon Gruden and his Raiders. Here’s a team that’s coming off two big wins against playoff contenders in that of the Indianapolis Colts and Chicago Bears. No one could have foreseen this after Oakland was outscored 62-24 in its previous two outings.

The Raiders now head into Week 7 just a half game behind the Kansas City Chiefs in the AFC West. They also have the pleasure of traveling to Green Bay to take on a red-hot Packers team. We’re highly intrigued to see if Oakland can pull off a third consecutive upset victory. If so, this team will have to be taken seriously.

If Cousins continues this electric play under center, his Vikings will have to be seen as legitimate NFC title contenders. That continues Week 7 against a good Detroit Lions defense. Cousins struggles on the road. He struggles against good defenses. If he’s able to turn the corner here, it will tell us a lot about the Vikings moving forward.

Coaching for his job in Big D

Rumors are now persisting that Jason Garret’s hold on the Dallas Cowboy’ job could be tenuous following an humiliating road loss to the previously winless New York Jets last week. Dallas has now lost three consecutive games and heads into Week 7 with first place in the NFC East on the line against the Philadelphia Eagles.

While the Eagles themselves have struggled to a .500 start, they seem to be confident heading into Dallas. If the Cowboys were to lose a fourth consecutive game on national television heading into their bye, Garrett could be out. It would be similar to the team firing then-coach Wade Phillips after a 45-7 blowout loss to the Packers on “Sunday Night Football” back in 2010, only to replace him with Garrett. Talk about coming full circle.

Taking control of the AFC South

For a while there, it looked like this division would send a .500 team to the playoffs. None of the four squads showed much through the first several weeks of the season. That changed big time this past Sunday after Deshaun Watson led his Texans to a resounding win over the Kansas City Chiefs.

At 4-2 on the season, Houston now takes on a division rival in that of the Indianapolis Colts who also defeated the Chiefs in their last game. Can the Texans ride Watson’s MVP candidacy to a fifth win in seven games and take a stranglehold on the division? Or, will Indianapolis push itself into first place at home Sunday afternoon?

Just how ugly will it get in D.C.?

The Washington Redskins were a two-point conversion away from losing their sixth consecutive game to open the season. It came against the nightmare that are the Miami Dolphins. Needless to say, optimism is not too high for the Skins one game into the Bill Callahan tenure.

We don’t expect that to change Sunday afternoon when the undefeated San Francisco 49ers make their way to the nation’s capital. They just dominated the defending conference champions on the road last week. San Francisco also boasts a defense that ranks in the top two in pretty much every major statistical category. This game could get ugly in the matter of minutes. If so, an already fractured Redskins organization will lead to even more drama in D.C.

Battle for relevance in Nashville

Both the Chargers and Titans head into their Week 7 matchup at 2-4 on the season and coming off humiliating losses. Los Angeles saw Pittsburgh Steelers fans take over its home stadium in a loss this past Sunday night. The Chargers have now dropped four of their past five games.

It’s not much better in Tennessee. Supposed franchise quarterback Marcus Mariota was benched for Ryan Tannehill as the Titans were shutout by the Denver Broncos, 16-0. With Tannehill getting the start Sunday, a loss here would set into motion further irrelevance in Nashville.

This is extremely intriguing stuff. Not only are these two rookies doing battle against one another in Jersey Sunday afternoon, they are leading teams that are surprisingly still in the playoff mix. Murray has led his Cardinals to two consecutive wins and has been an absolute dynamo during that span. In fact, the rookie No. 1 overall pick has accounted for nearly 1,000 total yards with five touchdowns and one pick over the past three games.

Things are a tad different for Jones and his Giants. The youngster was a turnover machine during what was an otherwise competitive game against the New England Patriots last week. His Giants are just one game out in the NFC East. No matter what happens between Philadelphia and Dallas, a win here would have New York in a tie for second place heading into Week 8. That’s crazy stuff.

Statement game for Lamar Jackson and the Ravens

Baltimore is coming off a hard-fought win over a hapless Cincinnati Bengals squad and appears to be both playing down to the level of its competition and getting up for big games. Fresh off making history, we’re not expecting this to change when it comes to young quarterback Lamar Jackson.

But make no mistake about it, Sunday’s outing against a 5-1 Seahawks team in Seattle will be a barometer of where Baltimore stands heading into the midway point of the season. Can Jackson go tit-for-tat with MVP front runner Russell Wilson? If so, it will tell us what we need to know about the young quarterback and his No. 1-ranked offense.