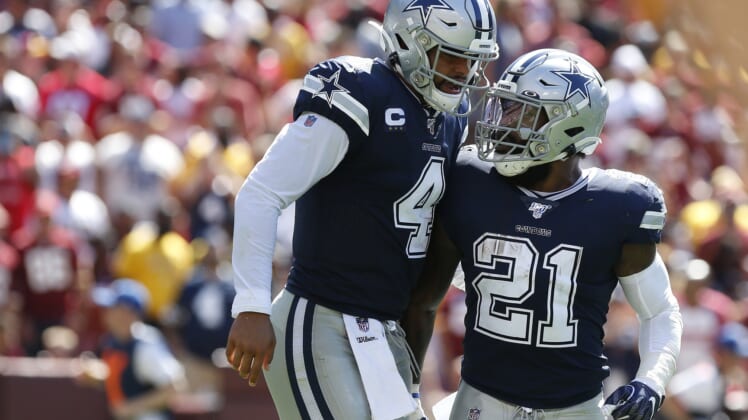 Week 4 of the NFL season is stacked with important games in both conferences. The Dallas Cowboys face their first real test of the season after blowing out three lesser opponents.

Meanwhile, the New England Patriots will do battle with another undefeated squad as they take on the surprising Buffalo Bills in Western New York.

Speaking of undefeated teams, the Kansas City Chiefs head to Detroit to take on a Lions squad looking to make a real statement.

These are among the top storylines for Week 4 of the NFL season.

Already at 1-2 on the season, the Eagles find themselves two games behind the Dallas Cowboys in the NFC East. We’re not math majors, but common logic seems to suggest that taking away the opportunity of winning a division limits Philadelphia’s playoff aspirations.

The Eagles now head to Lambeau Field to take on an undefeated Packers team on “Thursday Night Football.” It’s as much of a must win as Doug Pederson’s squad can have during the first quarter of the season. With the likes of Alshon Jeffery, DeSean Jackson, Ronald Darby, Malik Jackson, Lane Johnson and Jalen Mills all banged up, it’s going to be a tough ask.

We’re not even sure this is a real stat. Boasting the likes of Bradley Chubb and former Super Bowl MVP Von Miller, the Broncos have racked up all of zero sacks in three games. Did we mention that Denver is now headed by one of the most-respected defensive-minded coaches in the NFL, Vic Fangio? It’s patently absurd that Denver can’t get to the quarterback.

Already in the midst of a lost season at 0-3, how this unit performs against rookie quarterback Gardner Minshew and the Jaguars on Sunday will be telling. Another weak performance, and rumors of a potential Von Miller trade ahead of next month’s deadline will start to heat up even more.

Dan Quinn coaching for his job

Much like the Philadelphia Eagles, it seems that Atlanta is at a breaking point in the season. The Falcons are coming off a brutal road loss to the Indianapolis Colts last week and sit at 1-2. They boast an 8-11 record under the embattled Quinn since the start of last season.

Sure the NFC South could be ripe for the picking with Drew Brees out a while longer. But these Falcons have not inspired any confidence in their last 19 games. A Week 4 outing against a mediocre Tennessee Titans team at home could act as tonic for Atlanta. If not, Quinn’s seat will get even hotter.

Statement game for Bills in Buffalo

Some seem to be discounting the Bills’ first 3-0 start since the 2011 season. We’re not 100% sure why. We’re talking about a defense that ranks in the top 10 in pretty much every major category. Josh Allen has bested Super Bowl quarterback Jared Goff with his performance over the past dozen or so games. It really is something to behold.

Set to take on a defending champion Patriots squad that’s also 3-0 and wrecking its opponents through three games, Sean McDarmott and Co. could make a statement come Sunday afternoon. The better news? Buffalo held Tom Brady to just 126 passing yards in their final meeting last season. There’s some cause for optimism here.

Despite their 3-0 start to the season, there’s this nagging feeling that Jared Goff has regressed from his first 1.5 seasons under Sean McVay. Playoffs included, he’s recorded 11 touchdown passes and 11 interceptions in as many games. This doesn’t necessarily inspire confidence that Goff has what it takes to lead the Rams to a second consecutive title in a conference that’s vastly improved.

Some might figure that the Buccaneers would give Goff a nice little reprieve at home on Sunday. That’s until we realize that they have yielded a sub 58% completion mark with just three passing touchdowns in as many games. More struggles from Goff in Week 4 could be telling moving forward.

No matter what happens between the Steelers and Bengals Monday night, the Baltimore Ravens could open up a commanding two-game division lead with a win over the Cleveland Browns on Sunday. That would be a bitter pill for Browns head coach Freddie Kitchens and Co. to swallow.

Baltimore is coming off a hard-fought road loss to the Kansas City Chiefs and played a much more competitive game than most initially thought possible. At 1-2 on the season, Cleveland boasts the sixth-worst scoring offense in the NFL. Baker Mayfied has proven to be vastly overrated. Kitchens is struggling with play calling. A loss here could send the Browns into a free fall that’s been all-too common over the past two decades. Huge game for both teams.

It appears that the preseason was an indication that this rookie No. 6 overall pick was ready to take over for Eli Manning as the New York Giants’ starter. It took only two games for that to come to fruition, with Jones absolutely balling out in a comeback win over the Buccaneers last week. The Duke product completed 23-of-36 passes for 336 yards with two touchdowns and zero interceptions. He added two rushing scores.

Now set to take on a laughable Washington Redskins team without Saquon Barkley in the mix, Jones has another chance to prove himself. Washington’s defense made Bears quarterback Mitchell Trubisky look like a prime Eli Manning last week. Could Jones be in store for another electric performance here?

Righting the ship in Southern California

Narrow losses to the Lions and Texans has the Chargers on the brink of irrelevance in the AFC West. Philip Rivers and Co. simply can’t afford to fall any further behind the Kansas City Chiefs. It’s also troubling in that Los Angeles is struggling in narrow affairs after going 3-6 in Anthony Lynn’s first season in one-score games back in 2017. The Chargers were 5-1 in said outings this past season.

There’s certainly good news on this front. The Chargers are set to take on a league-worst Dolphins team in Week 4 that has been outscored 133-16 over the first three games. Anything short of a blowout victory will be having Southern California fans concerned in a big way.

First real test for the Cowboys

Like most of the undefeated teams outside of the Rams and Packers, these Cowboys have not been challenged thus far on the season. In fact, Dallas first three opponents boast a combined 1-8 record and have been outscored by an average of 36-16 per game. That’s just absurd stuff right there.

This level of competition is also going to be ramped up a great deal in New Orleans come Sunday night. Sans Drew Brees, the Saints are coming off an impressive road win against the Seattle Seahawks. Alvin Kamara and Michael Thomas continue to do their thing. Meanwhile, the New Orleans defense is absolutely legit. This will be a huge initial test for Dak Prescott and Co.

Are the Colts for real?

Indianapolis is one overtime loss from being undefeated on the season. No one could have imagined that when Andrew Luck abruptly announced his retirement late during the summer. However, a combination of strong play from Jacoby Brissett and a surprising sixth-ranked rushing offense has the Colts looking like legit contenders in the mediocre AFC South.

Indy now hosts a bad Raiders squad that has been outscored 62-24 in its past two games after opening up the season with a win. This is an opportunity for the Colts to dominate a lesser opponent and prove their worth as a legitimate playoff hopeful in the AFC.

Much-needed cupcake game for the Seahawks

There’s an argument to be made that Seattle could very well be 0-3 on the season. It was outplayed in every way at home against a winless Cincinnati Bengals squad in the season opener before narrowly escaping another winless team in that of the Pittsburgh Steelers in Week 2. Then, this past week, the Seahawks had it handed to them by the Drew Brees-less Saints at home.

It’s not looking great for Pete Carroll’s squad, especially with the 49ers and Rams undefeated within their division. The good news here is that Seattle gets to take on another winless team in that of the Arizona Cardinals coming off a blowout loss to Carolina last week. Simply put, first-year head coach Kliff Kingsbury and rookie quarterback Kyler Murray look to be in over their heads. Anything less than a blowout win will be cause for alarm in the Pacific Northwest.

Chance to make a statement in Motown

No one is really talking about the Lions as one of eight remaining undefeated teams in the NFL. It could have to do with them tying against the hapless Cardinals at home in Week 1. Even then, Detroit has taken care of business over the past two weeks — beating 2018 playoff teams in that of the Chargers and Eagles.

It’s going to get a whole lot more difficult this week against record-breaking quarterback Patrick Mahomes and the Kansas City Chiefs. It’s also going to be a great test for the Lions’ revamped defense under head coach Matt Patricia. A solid performance in even a narrow loss would tell us a lot about this Lions squad in the ultra competitive NFC North moving forward.