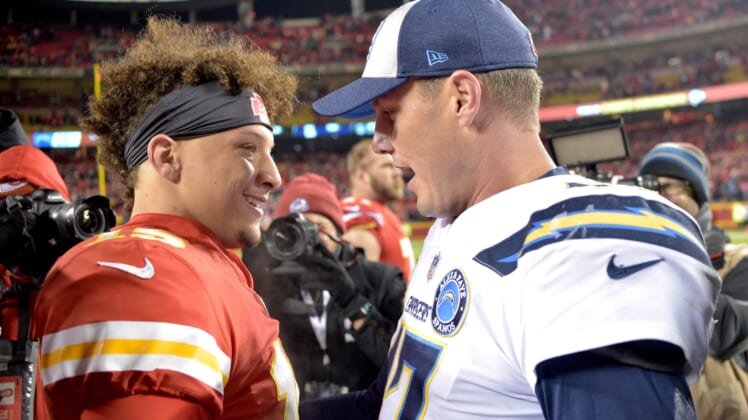 We’re heading toward the crunch time of the NFL season. This stretch before Thanksgiving and the holidays represents an opportunity for teams to separate themselves from the pack.

Week 11 around the league is no different. Can the Pittsburgh Steelers continue their current run and remain very much alive in the AFC Playoff picture Thursday night against the Cleveland Browns?

The rest of the slate represents a ton of interesting games, too. The Kansas City Chiefs will look to rebound after last week’s horrible loss and remain in first place in the AFC West. Over in the NFC, the Dallas Cowboys need a bounce back performance after last week’s loss. Meanwhile, a major battle is brewing between two MVP candidates in Maryland.

It’s in this that we give you the top storylines for NFL Week 11.

Battle of MVP candidates in Baltimore

Fresh off yet another otherworldly performance, Lamar Jackson and his Ravens are set to host another AFC Playoff contender in that of the Houston Texans on Sunday. With statement wins over the Seahawks and Patriots this season, Jackson has his 7-2 Ravens as legit Super Bowl contenders. He’s now accounted for nearly 2,800 total yards and 21 touchdowns.

On the other side, Deshaun Watson and his Houston Texans are coming off their bye at 6-3 and are in first place in the AFC South. All he’s done is put up 23 total touchdowns and just five interceptions. This is legit battle of MVP candidates and it could have wide-ranging ramifications on the AFC Playoff race moving forward.

Suddenly a must-win game for 49ers

Despite a horrendous offensive showing against the Seahawks last week, San Francisco was one shanked overtime field goal away from going 9-0 on the season. Some questionable play calling in that extra stanza enabled Seattle to win with a walk-off field goal.

Now at 8-1 on the season and just a half game ahead of Seattle, these 49ers are in must-win mode at home against the Arizona Cardinals on Sunday. It seems ridiculous to say this given they still boast the NFL’s best record. That’s until we realize the 49ers’ next three games come against the Packers, Ravens and Saints. It’s time for Jimmy Garoppolo and Co. to get back on the winning track against an inferior opponent.

Both the Eagles and Patriots were helped by other teams during their bye week. New England now boasts a two-game lead over the Buffalo Bills in the AFC East. Meanwhile, Dallas’ loss to the Vikings has Philadelphia all squared up in the NFC East. That’s where this huge Sunday afternoon game in Philadelphia comes into play.

Given what we’ve seen from teams such as the Vikings and Seahawks thus far on the season, the Eagles’ only real hope of making the playoffs is by winning their division. Meanwhile, Tom Brady and the Pats find themselves just one game ahead of the above-mentioned Ravens for home-field advantage in the AFC. Having already lost to Baltimore, the Pats can’t afford another let down coming off their bye.

Must win for the Rams at home

It was absolutely brutal to watch Jared Goff attempt to navigate the field against a ball-hawking Steelers defense in Week 10. The struggling signal caller threw two horrible interceptions and had a fumble returned for a touchdown. Los Angeles put up all of three points on offense in a narrow loss to the Steelers. Now at 5-4 on the season, it’s time for this team to turn the page.

That starts at home Sunday evening against an elite-level Bears defense led by Khalil Mack. Goff must get right. Sean McVay must overcome his recent struggles calling plays. If that doesn’t happen, the Rams could very well drop to 5-5 and pretty much completely out of the NFC Playoff picture.

Can the Raiders take care of business?

For just the third time over the past 15 seasons, the Raiders head into Week 11 against a winless Cincinnati Bengals squad as double-digit favorites. One of the final games in Oakland before they relocate to Las Vegas, the Raiders are going to want to make a statement here.

This statement includes taking care of business against a vastly inferior opponent while remaining very much alive in the AFC West picture. Following last week’s thrilling win over the Chargers, these Raiders find themselves at 5-4 and just a half game behind Kansas City. They simply can’t afford a let-down performance against the NFL’s worst team.

Cowboys in desperate need of a bounce back performance

Now at 5-4 on the season following last week’s narrow loss to the Vikings, Jason Garrett and the Cowboys pretty much find themselves in a must-win game against the Detroit Lions Sunday afternoon. Even with the team tied atop the NFC East, things are troubling in Big D right now.

Following Week 11, four of the Cowboys’ next five games come against teams that are currently over .500. That includes back-to-back outings against the Bills and Patriots. Needless to say, taking advantage of one the easier games remaining on their schedule is a necessity for the Cowboys.

Despite a solid win last week against the Buffalo Bills, it appears that Baker Mayfield and the Cleveland Browns are just playing out the stretch. At 3-6, they’d need to go on a major run in order to be seen as playoff contenders. The good news? Cleveland boasts the easiest remaining schedule in the NFL with games against the Dolphins and Bengals (twice).

In order for Cleveland to be seen as a contender, it will have to dispose of a Steelers squad that has won five of six since an 0-3 start to the season. Pittsburgh currently finds itself in a tie with the Colts and Raiders for the final wild card spot. A win in Cleveland on Thursday night would go a long way in helping Mike Tomlin’s squad remain relevant.

Last week’s surprising 26-9 blowout loss to the previously one-win Atlanta Falcons threw these Saints for a loop. Most expected complete domination at home. In no way did that come to fruition. In the midst of the easiest part of their schedule, it’s time for the Saints to rebound.

It won’t be incredibly easy this week against a potent Buccaneers offense in Tampa Bay. That’s magnified by the injury to Pro Bowl cornerback Marshon Lattimore. This will give Mike Evans and outside shot to dominate. If so, New Orleans could fall to 7-3 and behind the proverbial eight-ball when it comes to home-field advantage in the NFC Playoffs.

It was not terribly surprising to see the Jaguars name Foles the starting quarterback once he came off injured reserve. Despite some tremendous play from rookie Gardner Minshew, the high-priced Foles was always going to get the starting job back.

The former Super Bowl MVP is now going to be thrown right into the fire against the Indianapolis Colts on the road Sunday. Indy’s surprising loss to the Miami Dolphins last week has the team at 5-4. Meanwhile, Jacksonville sits at 4-5 and on the brink of falling out of contention. This is a huge game for both squads.

Keeping it going in Minneapolis

With five wins in their past six games after a 2-2 start to the season, the Vikings are right up there with the Green Bay Packers in the NFC North. This has been primarily due to the play of the star-studded backfield of Kirk Cousins and Dalvin Cook. Cousins has thrown 18 touchdowns compared to three interceptions. Meanwhile, Cook has put up an absurd 1,415 total yards in 10 games.

Sunday will provide this elite pairing with a difficult matchup against a Broncos defense that has held some top-scoring offenses in check this season. Will Cousins and Co. be up for the task or suffer an emotional let down after last week’s big win over Dallas?

Huge battle across the border

Following last week’s disappointing performance, Philip Rivers and the Chargers find themselves in must-win mode against the division-rival Kansas City Chiefs. It comes in Mexico and on “Monday Night Football.” A loss here would move Los Angeles to three games behind Kansas City in the AFC West.

For their part, the Chiefs wasted a brilliant return from Patrick Mahomes last week in a narrow loss to the Titans. If Kansas City were to drop this with Oakland taking out a winless Bengals squad, the Chiefs would find themselves in second place. They’d also be just one game ahead of Los Angeles. Yeah, this is a huge international game with epic implications.