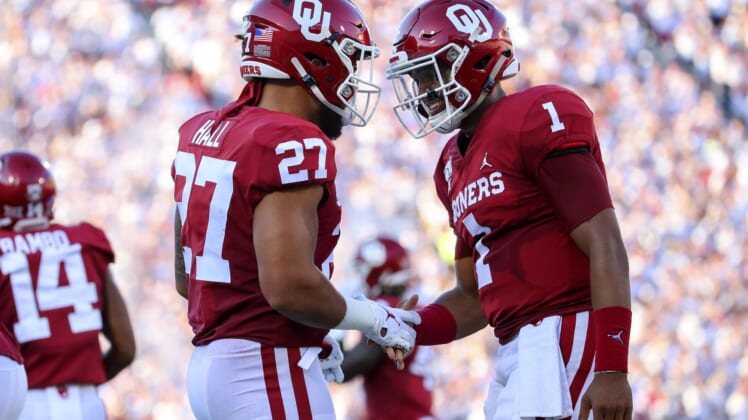 A month has gone by, and the college football season really is starting to take shape around the nation heading into Week 5.

We’ve got some excellent matchups on the schedule this weekend, which really heats up with a four-game slate on Friday night.

Here’s a look at what we’re focused on as the top storylines heading into college football Week 5.

Had this question been posed a few weeks ago, rather than today, the answer would have been unequivocally “yes.” Maryland’s offense, through two games, was the nation’s most explosive averaging an absurd 71 points per game. Then, the Terps fell to Temple, of all teams, in Week 3.

History suggests Friday night’s game won’t be remarkably close. Penn State and Maryland have played each other 42 times going back to 1917. The Nittany Lions have won 39 of these contests, with the last Maryland win taking place during the 2014 season.

However, if Josh Jackson and his offense can get going early, and if Maryland’s defense plays its best game, perhaps we’ll witness an upset in College Park Friday night.

Cal looking to stay atop the Pac-12

Late on Friday night, the California Golden Bears will look to stay undefeated and remain the Pac-12’s best chance of somehow making it into the playoff at the end of the season. Cal defeated Ole Miss last weekend to remain perfect, and on Friday the Bears will host Arizona State in a game that promises to be tightly contested.

The Sun Devils have been very good defensively most of the season but were upended by Colorado last weekend. Cal quarterback Chase Garbers, fresh off a four-touchdown performance against Ole Miss, appears to have his offense on an upward trajectory. If the Bears, led by tackling machine linebacker Evan Weaver, can continue to play outstanding defense as they have of late, then we expect them to improve to 5-0 on the season.

Fun in the sun at Memorial Stadium

Texas Tech is on the road visiting Oklahoma in Week 5, and both teams come into the contest rested up with bye weeks last weekend. Fireworks should fly on a regular basis as these two high-powered offenses duke it out in Norman.

The Red Raiders are without star quarterback Alan Bowman, who is out with a shoulder injury. Yet no matter who starts under center for Texas Tech, this offense has the playmakers to hang around against the Sooners.

But the real reason to tune into this game, of course, is for the chance to see Jalen Hurts unleashed in Lincoln Riley’s offensive system. A veritable highlight machine, he’s one of the heavy Heisman favorites and hasn’t had a bad game yet. It’s going to be a fantastic game, and will be broadcast nationally on FOX at noon, ET.

TAMU looking to get right against Arkansas

Twice this season, Texas A&M has been given the opportunity to make a national statement with huge games against Clemson and Auburn. Twice, the Aggies have fallen short, and last Saturday’s loss to the Tigers showed the program still has a lot to do if it wants to be taken seriously as a national title contender.

Thankfully, Jimbo Fisher’s squad has the perfect chance to get right quick with a trip to AT&T Stadium and a date with Arkansas, which has been a flaming disaster this season. It Texas A&M can’t dominate the Razorbacks, then we’ll certainly have plenty to talk about. One loss away from being knocked out of the top-25, the Aggies need to rebound with a dominant win.

Most important game of the season for Notre Dame

Already teetering on the brink of being discarded as a product of hype, Notre Dame has, dating back to last year, sandwiched losses to Clemson and Georgia in between easy wins over Louisville and New Mexico. Sure, the Fighting Irish showed a ton of moxie and talent in their loss to the Bulldogs last weekend. Yet all that will be forgotten if they cannot handle Virginia Saturday at Notre Dame Stadium in Week 5.

The Cavaliers were lucky to escape last weekend with a win over Old Dominion. They are undefeated so far, but in no way are they seen as a threat to upset the Irish — Notre Dame is favored to win by nearly two touchdowns, and it should be.

Still, with upcoming games against USC and Michigan in October, this is the biggest game of the season so far for Notre Dame. Lose Saturday at home, and the Irish can kiss any hope of going to the playoff goodbye.

The USC Trojans have been one of the season’s most pleasant surprises. Clay Helton opened the season on the hot seat, and it seemed to heat up when the Trojans lost to BYU in overtime. Then, Matt Fink happened last Friday night, and suddenly USC appears to be a team worth watching for all the right reasons again.

That theory will be put to the test Saturday as the Trojans travel to Seattle for a date with the Washington Huskies. USC’s defense will have to be on point to keep Jacob Eason from going off. And whether it’s Fink or freshman Kedon Slovis under center, the Trojans have to continue attacking downfield with their big receivers as the focal point of the offense.

This is going to be a fun, and important game to watch in the Pac-12, which is suddenly more interesting than it was a couple weeks ago.

After impressively knocking off Texas A&M in College Station last weekend, this weekend’s home game against Mississippi State could be viewed as an easy win. However, in the immortal words of Admiral Ackbar, “It’s a trap!“

Auburn put it all on the table defeating the Aggies, showing up huge in all three phases of the game. The Tigers also have a huge game coming up after facing the Bulldogs in the form of a road trip to The Swamp to face the Florida Gators.

It’s a classic trap-game scenario for Gus Malzahn and Co. Hopefully the Tigers can get mentally ready for Saturday’s game. If not, it could result in the program’s doom.

Chance for K-State to make a statement

The Wildcats are the nation’s No. 24-ranked team and come into college football Week 5 with an undefeated record, having already dispatched the SEC’s Mississippi State Bulldogs in Week 3. Yet Kansas State comes into this weekend as a road dog (+5.5) against Oklahoma State. Clearly, oddsmakers don’t yet view this as a team worth taking seriously.

This game is a prime opportunity for rookie head coach Chris Kleiman, who replaced legend Bill Snyder, to make his mark. Winning will require Kansas State’s defense to play its finest game of the season, and junior quarterback Skylar Thompson will likely need to throw more than he has all year.

Can Nebraska rise to the challenge?

Scott Frost has his team in good position with a 3-1 record heading into Saturday night’s crucial matchup at home against Ohio State. Yet there are some huge problems bubbling underneath that shining veneer that could come home to roost in a huge way in this game. Most notably, Nebraska’s 11 turnovers this year ranks second-worst in the nation.

Meanwhile, the Buckeyes come into college football Week 5 looking very much like a legitimate playoff contender. Justin Fields and J.K. Dobbins have the offense humming like a well-oiled machine, and defensive lineman Chase Young leads one of the most dangerous defensive fronts in the nation.

Needless to say, Nebraska cannot turn the ball over on Saturday like it has so far. It’s a huge game for Frost and Co. Will the Huskers show up big, or will they be mowed down in front of their hometown fans?

Mike Leach and the Washington State Cougars will be in Salt Lake City late Saturday night for a date with a ticked-off Utah team that had national championship aspirations before getting its teeth kicked in by USC last Friday night.

Of course, the Cougs have reason to seek revenge as well, having lost to UCLA in somewhat embarrassing fashion after being up 49-17 midway through the third quarter last Saturday night in Pullman.

Will Utah’s defense rebound after being utterly abused by Michael Pittman and the Trojans? Will Anthony Gordon continue to have success after throwing an insane nine touchdowns last weekend, only to lose? Will this game gloriously devolve into yet another stereotypical #Pac12AfterDark special? We can’t wait to find out.