Seven storylines for Week 14 of the college football season

It’s hard to believe we’re heading into conference championship weekend already as the 2015 college football season winds down in Week 14.

These are the top storylines as we get ready for the championship matchups that will finally define what the postseason looks like after a glorious season of compelling action.

1. Matt Johnson in the spotlight

For fans who mainly stick to the big schools when enjoying college football throughout the regular season, Friday night is an excellent chance to witness one of the nation’s top small-school stars.

Bowling Green quarterback Matt Johnson leads the country in passing yards heading into Week 14. He’s one of those rare players who is worth the price of admission to see live, and he’ll be on center stage starring in the only game on television Friday night. Johnson leads the Falcons against MAC rival Northern Illinois, which famously gave Ohio State a run for its money early in the year.

Johnson’s speciality — the reason he’s so exciting to watch — is that he is unbelievably accurate on deep passes. According to John Breitenbach of Pro Football Focus, heading into last weekend’s action he’d hit on 18 touchdowns without a single interception on passes that went 20-plus yards in the air.

On the season, the Bowling Green signal-caller has completed 68.9 percent of his passes for 4,465 yards with 41 touchdowns an just six interceptions. And, for those who are interested in history, he’s on the verge of breaking a MAC passing record held by none other than Big Ben Roethlisberger.

I have Matt Johnson @11DroppinDimes McDevitt Bowling Green just 21yds behind Roethlisberger for most in MAC season pic.twitter.com/IvRFkxM1M5

As far as championship games go, this one won’t likely contain much drama. Look for Johnson and the Falcons to dominate the Huskies Friday night to claim the MAC title.

2. Can the Owls find a way to keep Greg Ward Jr. in check?

If not for an injury suffered against Memphis, Greg Ward Jr. may have led Houston (No. 19) to an undefeated season. As it stands, he has yet to lose a single game in which he started, and the Cougars have a chance to finish the season strong against a tough Temple program (No. 22) that has played well the past couple of weeks.

A dual-threat passer, Ward went off last weekend in his first game back from the ankle injury that kept him from starting against UConn, passing for 308 yards, rushing for 83 more and scoring four total touchdowns. He’s almost impossible to contain and routinely makes the ridiculous look ridiculously easy.

With a record of 11-0 as a starter this year, he leads an offense that averages 44.3 points per game in those starts, which would be No. 4 in the nation. As it stands, including the 17-point output in the loss against the Huskies, the Cougars still rank No. 7, averaging 42 points per contest.

Temple’s defense might be able to do what nobody else has done, though, which is keep the dangerous quarterback from having a big game. Allowing just 18.8 points per game, the Owls recently shut down Paxton Lynch and the Memphis Tigers and gave DeShone Kizer of Notre Dame a hard time earlier this year.

Given the way Ward shredded Navy’s normally strong defense last weekend, however, nobody should expect him to have an off game Saturday when Houston hosts Temple in the AAC Championship Game. 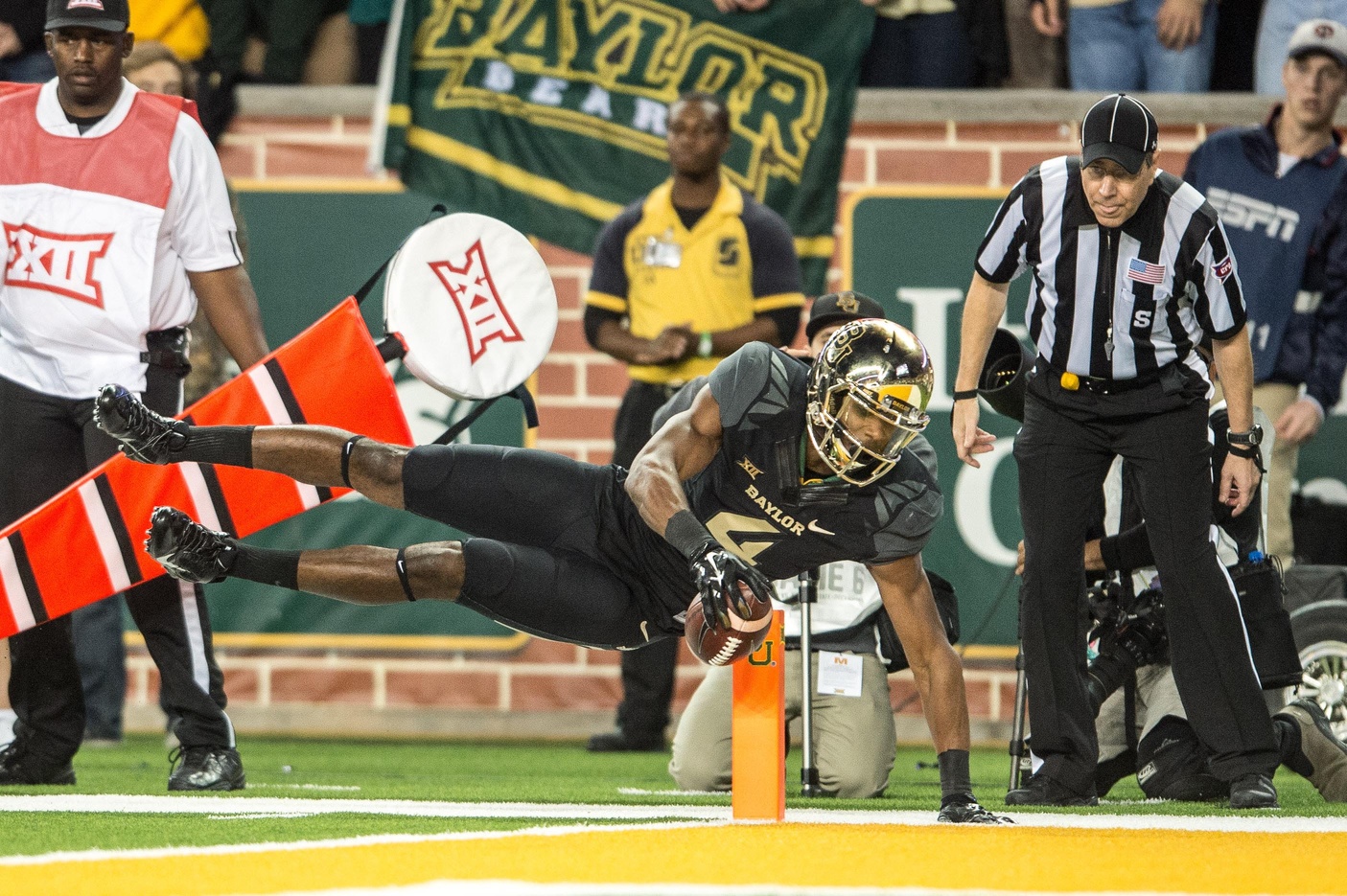 After proving over and over again that they belonged in the same conversation as the Clemsons and Alabamas of the college football world heading into the month of November, the No. 12-ranked Bears were dealt a harsh blow when starting quarterback Seth Russell and his backup, Jarrett Stidham, were lost for the season with injuries within weeks of one another.

Baylor went from being 8-0 and looking like eventual Big 12 champs to a shocking 1-2 mark the past three games — from being a national championship contender to a team that now must win to land one a spot in the Sugar Bowl.

With a win over Texas this weekend, though, Art Briles and his players would have a chance to end the season on a high note with a berth in the Sugar Bowl as the No. 2 team in the Big 12.

“Well, I’d be running as fast as I could to get that berth, because it’s worth chasing. But right now we have a job to do Saturday, and that could really be a great accomplishment for our football team, because if you’re not going to finish first, then finish second,” Briles said on Monday about a potential Sugar Bowl berth, per the school’s website.

Texas isn’t being given much of a chance to win this game by sports bookies across the nation. Baylor — even with third-string quarterback Chris Johnson — is favored to win by three touchdowns by ESPN’s PickCenter. Then again, nobody gave the Longhorns a chance to beat Oklahoma earlier this year in the Red River Shootout, and we all know how that went.

The Bears must find a way to cut down on turnovers to avoid finishing what was once such a promising season with a muted thud.

4. Win and you’re in for Michigan State and Iowa

This is a really interesting matchup. Fans from both schools feel their team doesn’t get enough national respect, and they both might have a point.

Regardless, the winner of this game will certainly get into the playoff, while the loser will take a mighty tumble down the rankings heading into the bowl season.

Undefeated Iowa (No. 4) hasn’t faced an opponent like Michigan State (No. 5) all year long.

To this point in the season, the toughest opponents faced by the Hawkeyes have been Wisconsin and Northwestern, and it’s worth pointing out the folks at fbschedules.com rank Iowa’s schedule as the 62th-toughest in the nation. Of course, the same rankings have Michigan State at No. 53, so it’s not like the Spartans have been challenged all that much more.

Connor Cook’s leadership and experience in big games should be a huge benefit to the Spartans, but he’ll need to be extra careful with the football Saturday against the Hawkeyes, who feature one of the nation’s best defenses at creating turnovers in the passing game. Iowa’s defense is top-notch, and nobody has more interceptions than cornerback Desmond King.

Fans should expect a hard-fought battle between these two hard-nosed teams. A blowout by either team would be a surprise, and it’s far more likely the outcome won’t be decided until close to the final whistle.

5. Any chance at all Florida upsets Alabama?

The short answer here is no, Florida (No. 18) has no chance of pulling off the upset of the season against Alabama (No. 2).

Watching the toothless Gators flail about offensively last weekend against a Florida State defense that doesn’t compare to the dominant unit Nick Saban has assembled should make Florida fans sick to their stomach about this upcoming matchup.

The only chance Jim McElwain has of rallying his team to victory would be if his defense somehow found a way to shut down Heisman favorite Derrick Henry. ‘Bama’s top offensive weapon, Henry has put up 200-plus yards four times this season and would hit 2,000 yards on the season with another 203 rushing yards in the championship game.

If Henry could be rendered ineffective, then it’s conceivable the Gators could perhaps force a turnover or two out of quarterback Jake Coker — the Crimson Tide’s weakest link, without a doubt.

Again, though, even if Florida is able to keep Alabama from going wild offensively, it’s still hard to imagine Treon Harris and Florida’s offense making enough happen for the Gators to pull off the upset.

Partly because he plays for Stanford (No. 7), which is out of the playoff, and partly because he doesn’t have the touchdown numbers (11 total), Stanford’s Christian McCaffrey is often overlooked when discussing Heisman favorites.

It’s a shame, too, because the scrappy running back is having one of the best all-around seasons of any player in the history of the game rushing, receiving and returning kicks. After piling up 228 all-purpose yards last weekend, he only has 216 more yards to exceed Barry Sanders’ all-time mark and he’s only the third player in history to exceed 3,000 all-purpose yards in a season.

Stanford and USC (No. 20) are getting ready to clash Saturday night in the Pac 12 Championship Game. USC is entering a new era under no-longer-interim head coach Clay Helton, who clearly has the support of his players after being announced as the permanent head coach (watch here).

The Trojans have won five of their last six games, taking down the likes of UCLA and Utah, but the team’s defense has been known to give up big yardage (400 yards allowed per game). McCaffrey has a tremendous opportunity to not only break Sanders’ record but to also remind voters that he deserves strong consideration to win the Heisman.

It seems like a long shot for North Carolina to get into the playoff, even with a win over Clemson.

Is that fair? No, it’s not. Not even a little bit, considering the team’s 11-game winning streak. However, considering the Tar Heels are ranked No. 10 heading into the ACC Championship Game, it sure seems like the Selection Committee isn’t convinced Larry Fedora’s team is legit.

For his part, Fedora believes his team should get into the playoff with a win over Clemson, and who can blame him?

UNC coach Larry Fedora on the playoff: “If we beat the consensus No. 1 team in the country, yes, I believe our team is deserving.”

Led by quarterback Marquise Williams, who has quietly put together a phenomenal season (3,391 total yards and 28 total touchdowns), the Tar Heels feature an offense that puts points on the board with some regularity, scoring 41 points per game (No. 9 in the nation). 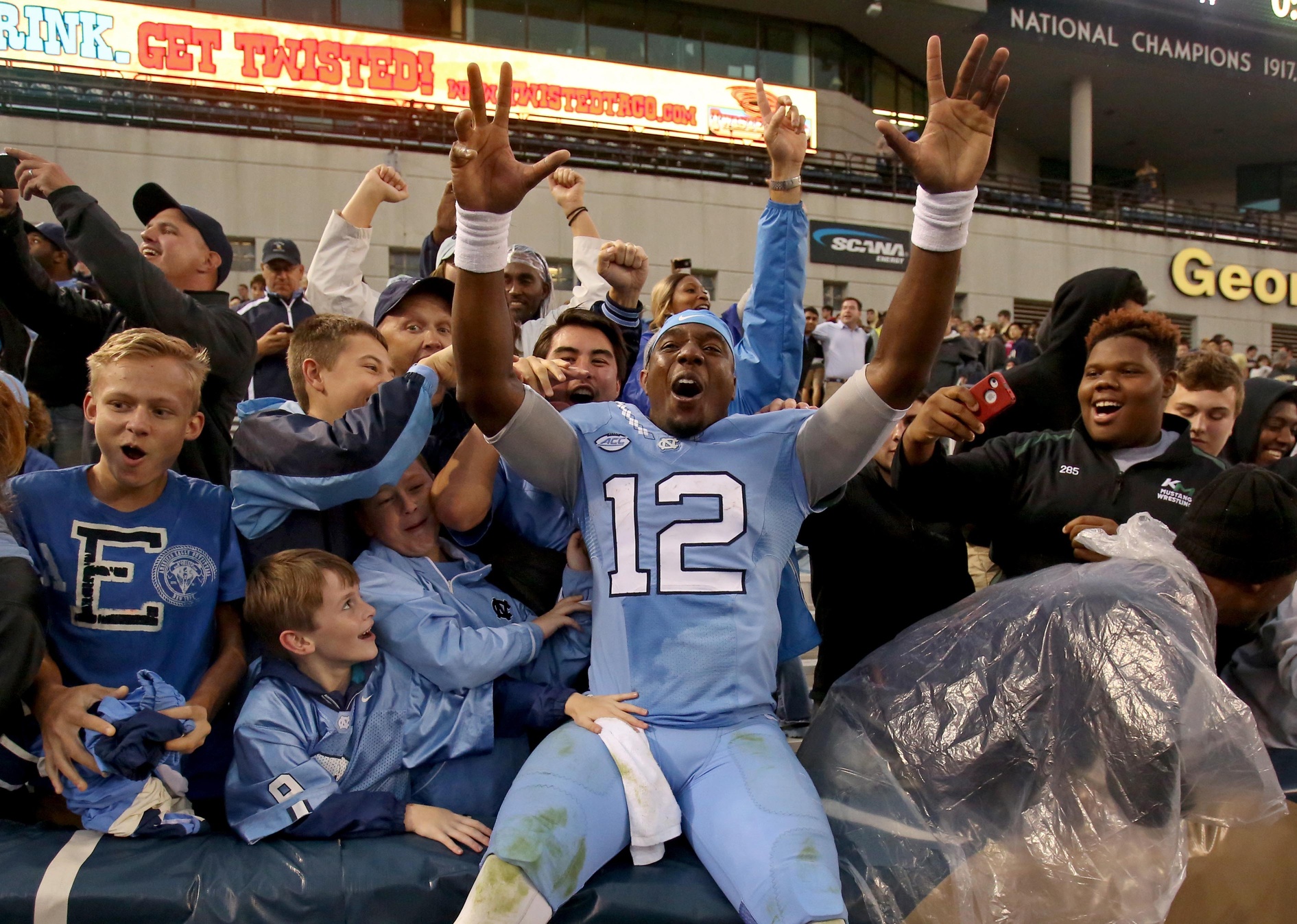 If North Carolina’s defense can stymie Deshaun Watson, then an upset is surely on the table as a possible outcome.

Clemson has backed its way into the championship game, too, allowing the likes of Syracuse, Wake Forest and South Carolina — with 10 wins between them — to make things interesting the past few weeks.

Still, it’s hard to imagine Dabo Swinney will allow his Tigers to come into this game with anything other than razor-sharp focus. And, if both teams play to their potential — on paper — then Clemson should finish the season undefeated.

With that in mind, if the Tar Heels are able to pull off the upset Saturday night in Charlotte, N.C. at the Bank of American Stadium, then there is no doubt they deserve to get into the playoff. In order to convince the Selection Committee to make such a move, however, North Carolina will likely need to win big, with teams like Ohio State and Stanford potentially as direct competition for the same spot.