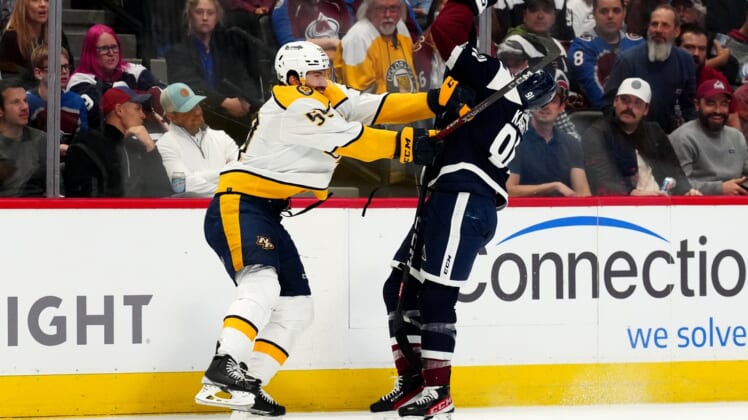 The Colorado Avalanche came into the season with the goal of winning their first Stanley Cup in 21 years. They traded for a goaltender, Darcy Kuemper, who could backstop a championship run, they made deals before and at the deadline to fortify the roster and they looked unbeatable for most of the season.

The buildup is over, and for Colorado, the real season begins. The Avalanche, the No. 1 seed in the Western Conference, will open the playoffs against the Nashville Predators on Tuesday night at Denver in Game 1 of their first-round series.

The two teams last met just five days earlier, a 5-4 shootout win for visiting Nashville that appeared to help the Predators avoid a meeting against Colorado in the first round. However, the Predators dropped into the second Western Conference wild-card position when they couldn’t hold a 4-0 lead at Arizona and lost in regulation on Friday night.

The two teams meet in the first round for the second time in the past five seasons. In 2018, Nashville was the top seed in the conference and faced a scrappy Colorado team that snuck into the playoffs as the eighth seed. The Predators won that series in six games and now find themselves as the underdog, in part because of their goaltending situation.

Nashville’s top netminder, Juuse Saros, sustained a high ankle sprain in the final week of the season and could miss at part or all of this series. That leaves coach John Hynes with either David Rittich or Connor Ingram in net.

Rittich made 42 saves in the Predators’ Thursday win over the Avalanche.

“I feel good about his game, which is really important,” Hynes said after that game.

The Predators have plenty of offensive firepower to match up against Colorado. Matt Duchene, whom the Avalanche took No. 3 overall in the 2009 draft, set a Nashville franchise record with 43 goals this season. Ryan Johansen has plenty of scoring ability, Filip Forsberg is a dynamic player and defenseman Roman Josi led the Predators with 96 points.

The Avalanche, on the other hand, were built for this spring. They are deep and finally healthy and have one of the best centers in the NHL, Nathan MacKinnon, as well as the possible Norris Trophy winner this season, Cale Makar.

The pieces added during the season — defenseman Josh Manson and forwards Nico Sturm and Artturi Lehkonen — add grit and scoring from the bottom six forwards.

One question will be how quickly Gabriel Landeskog can get into game shape. He hasn’t played since March 10 after knee surgery but was practicing and will play Tuesday.

“He’s worked so hard to get back from this and it’s always a work in progress,” Colorado defenseman Devon Toews said. “He’s going to have good days and bad days. Days where he’s really sore and days where he just feels really good. He’s going to bring it every night. That’s why he’s our captain and why he is our leader. We’re happy to have him back in our room.”