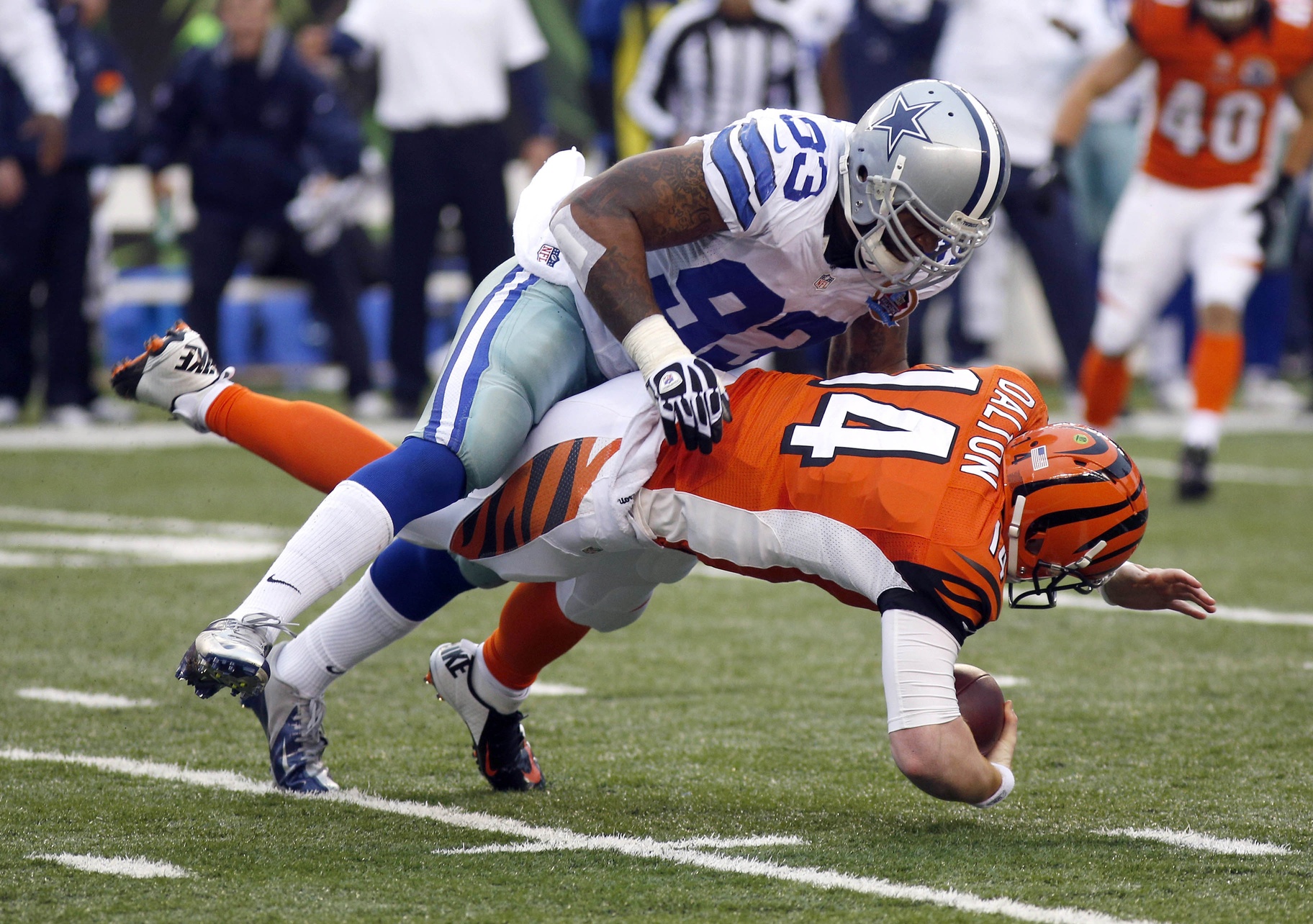 We have hit full scale draft season around the National Football League. This transition brings an end to the high-paced frequency of free-agent signings around the league as most teams will now wait until after the draft to fill remaining holes.

This doesn’t mean that there aren’t quality free agents remaining on the market. Here is our look at the top remaining NFL free agents and where they might land.

Curtis Painter and Luke McCown got jobs this offseason, but Josh Freeman is still out of work.

Yes, that’s a major surprise. Remember that Freeman is just one season removed from throwing for over 4,000 yards and 27 touchdowns. After being released by the Tampa Bay Buccaneers and sitting on Minnesota’s bench for a majority of the 2013 season, there seems to be a rather icy market for Freeman in free agency.

He had previously been linked to the Oakland Raiders, but their acquisition of Matt Schaub in a trade with the Houston Texans seems to make that possibility rather unlikely right now. Then you have questions about Freeman’s willingness to commit to getting better, which could have been a primary reason that Tampa Bay released him mid-season.

Teams that could be in the market for a backup include the Buffalo Bills, Cleveland Browns, Chicago Bears and Atlanta Falcons. While that’s likely Freeman’s best chance of catching on with a team, the Jacksonville Jaguars may be looking at avoiding a quarterback early in the upcoming draft. If so, it would make sense for them to bring Freeman in as training camp competition for Chad Henne.

Johnson was released by the Titans last week after six often successful seasons with the team. Despite a regression in terms of stats over the past few years, Johnson has still put up an average of over 1,400 total yards and about seven touchdowns since the start of the 2011 campaign. Those are numbers that a vast majority of NFL teams would take from their running back.

Four teams that discussed a potential trade for RB Chris Johnson, but ultimately declined to do so, were the Jets, Bills, Dolphins, Falcons.

Buffalo’s interest was apparently overblown, and for good reason. It already boasts a talented backfield with Fred Jackson and C.J. Spiller. Despite reports that the Falcons weren’t interested in Johnson, they seem to make some sense here. Jacquizz Rodgers has yet to step into the COP back role in Atlanta, which will need to be utilized more with Steven Jackson getting up there in age. Miami’s interest in Johnson was likely before it landed Knowshon Moreno on a free-agent contract last month. And the Jets definitely make sense with Chris Ivory as their primary running back.

Chris Johnson would LOVE to play for Denver I have been told.

I have been linking Johnson to the Denver Broncos for some time now. They lost Moreno in free agency and will be relying on second-year running back Montee Ball to be their primary ball carrier. Imagine Peyton Manning and Johnson in the same backfield together, especially with Johnson’s receiving ability. Manning’s presence could possibly return Johnson back to 2010 form.

Many expected Brown to get much more play on the open market than he’s received to day. He’s missed 14 games due to injury in each of the last two seasons and has yet to put up at least 500 yards in a season in his career. After being selected in the fourth round of the 2009 draft and missing that season due to injury, Brown jumped all around the NFL in 2010, suiting up for four different teams that year. He returned to the Giants during the 2011 campaign, but didn’t see any on-field action.

Brown was able to make a name for himself in 2012 due to a variety of different injuries to multiple running backs on the Giants roster. He scored eight touchdowns on just 73 attempts while averaging 5.3 yards per. In reality, Brown possesses the talent to be a decent backup running back in the NFL, but it’s the injuries that have forced teams to take a step back.

Brown previously met with Oakland, but it landed Maurice Jones-Drew on a three-year contract late in March. That’s about it for the now veteran running back. Teams with needs in the offensive backfield include the New York Jets, Cleveland Browns, Jacksonville Jaguars, Tennessee Titans, Chicago Bears and Minnesota Vikings.

At this point, teams are going to try their luck in the draft. It makes sense to bring in cheaper, younger alternatives that don’t have the same injury issues as Brown. If I were to make an educated guess here, the Minnesota Vikings make the most sense. They lost Toby Gerhart in free agency and need a backup to future Hall of Famer Adrian Peterson.

Finley visited with the Seattle Seahawks earlier in the offseason but didn’t come away with a contract due to continual issues with a serious neck injury that he suffered last season. That’s the major issue for Finley right now…passing a physical and being cleared after teams look at the medicals. If Finley is cleared, he’s going to be an upper-echelon receiving tight end in 2014. It’s all about getting healthy and being able to see the field.

The Packers remain interested in bringing Finley back, as head coach Mike McCarthy refuses to close the door on that option. Another team that seems to make a whole lot of sense at this point are the Oakland Raiders, who have a need for a consistent pass-catching tight end for veteran quarterback Matt Schaub. In fact, that’s where I keep going back to when attempting to make an educated guess. Finley caught 25 passes for 300 yards and three scores in six games last season.

Known around the NFL world as damaged goods, Austin has missed 11 games over the past three seasons and continues to deal with a nagging ankle injury. When on the field, he’s a proven commodity. The veteran recorded 66 receptions for 943 yards and six touchdowns in his last full season back in 2012. There is going to be interest in Austin if he shows he’s recovered from previous setbacks. Though, that interest will likely come after the draft when teams are able to assess where they are at.

Rotoworld suggests that Austin will likely have to settle on a one-year deal at the veteran minimum with very little guaranteed. That makes a ton of sense considering where he’s at right now and just how much injuries have been an issue for him in the past.

Like Austin, injuries are an issue for Holmes who has missed 21 games over the past two years. He’s recorded just 46 receptions for 728 yards and two touchdowns in the 15 games that he has played during that span.

Music City Miracles looks at the Tennessee Titans as a possibility…

Holmes doesn’t have to be the #1 receiver on the team or even the #2, but with Washington getting older and Kenny Britt, Damian Williams and Kevin Walter gone where is the depth in the wide receiver group?

Holmes has some off the field issues that have made him unappealing to some teams, and other teams question his price tag, but if the Titans could bring him in on a two year deal similar to what they did with Shaun Phillips, then they could be getting a bargain.

The Titans definitely seem like a solid fit for all the reasons mentioned above. A receiver group consisting of Kendall Wright, Justin Hunter, Dexter McCluster and Holmes could be really nice in Nashville. In order for this to happen, Tennessee would have to cut ties with Nate Washington, who has been its most consistent receiving threat over the past five seasons. Does that trade off make sense? I am not entirely too sure.

The San Francisco 49ers, Seattle Seahawks and New England Patriots are contending teams in need of veteran help at wide receiver. Despite this, I just don’t see much of a fit for any of these teams, especially if they’re able to add play-makers in the draft. This leads me to believe that Holmes’ best option might be the receiver deprived Carolina Panthers, who need as much help as they can get at wide receiver before training camp kicks off this summer.

Spencer missed the final 15 games of the 2013 season with a knee injury. This came on the heels of him signing a franchise tender that made him among the five highest-paid defensive ends in the NFL after a 11-sack performance the previous year. Unfortunately for Spencer, the market has been quite bare for him. That’s mainly due to the injury he suffered last year.

More of a 3-4 outside linebacker by trade, Spencer is somewhat of a scheme-specific player at this point. Though, he has visited with a 4-3 team in the past…

New York could make some sense, at least from a need standpoint. It lost Justin Tuck to the Oakland Raiders in free agency and could use a pass-rush specialist to fill the void. With that said, the San Diego Chargers seem like a logical option. They play a standard 3-4 defensive front and need a starter-caliber pass rusher in that scheme.

Notice a trend here? There are a ton of injury-prone veterans on this list. Terrell Thomas, who played in all 16 games and started seven last year, missed the previous two seasons with torn ACL’s. That’s a primary reason that he’s still on the open market.

Thomas has previously visited with the Oakland Raiders and Carolina Panthers. Where Carolina might still be a fit, the Raiders have added two veteran cornerbacks since in the form of Tarell Brown and Carlos Rogers. Interestingly enough, the team that both of those corners came from, the San Francisco 49ers, could be a logical fit for Thomas. He’s more of a press-man guy, which fits what the 49ers do. The need is definitely there with the departures of Brown and Rogers.