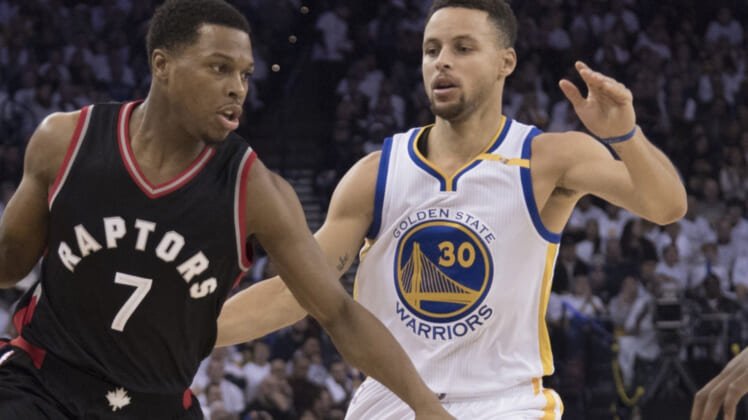 The Toronto Raptors can stay in Canada and prepare for Game 1 of the NBA Finals Thursday after an exhilarating Game 6 win over the Milwaukee Bucks in the Eastern Conference Finals.

Despite having home-court advantage against the Golden State Warriors, Toronto finds itself as major underdogs. Meanwhile, the two-time defending champs will be without Kevin Durant for at least the start of the series.

Here, we look at the top-five individual matchups for what should be a great championship round.

There’s a chance that DeMarcus Cousins will play early in this series after being out since Round 1 to injury. Even then, we fully expect Warriors head coach Steve Kerr to give Looney more minutes. After averaging 10.8 points and 6.2 rebounds over the past five games, he’s more than earned it. The Warriors are also a combined plus-24 with him on the court during that span.

Looney has interesting matchups against Gasol and Ibaka in that he seems to boast an advantage. Gasol is more of a perimeter player and averaged less than eight points on 34% shooting in the conference finals. Ibaka is a bigger threat inside, but he also struggled against Milwaukee.

Siakam should offer Green a different matchup than what we saw in the Western Conference Finals against Portland. The likely NBA Most Improved Player has an ability to score from both the inside and the perimeter. He shot 37% from three-point range during the regular season. That should help Toronto stretch the court against the Warriors.

It won’t come easy with Green playing the best basketball of his career. Green absolutely dominated on defense in the conference finals. He also proved to be more aggressive on offense, averaging 16.5 points, 11.8 rebounds and 8.8 assists per game. He’ll be a load for Siakam to handle defensively.

It comes down to one thing here. Curry must win this matchup and win it decisively if the Warriors are going to three-peat. There’s no world were Lowry compares to the two-time NBA MVP on both ends of the court.

Curry was absolutely dynamic in the conference finals. He averaged 36.5 points, 8.3 rebounds and 7.3 assists per game. It might have been the best single-series performance of his career. Meanwhile, Lowry has gone for less than 15 points in 10 of the Raptors’ 18 playoff games.

Van Vleet delivered big time during the final three games of the Eastern Conference Finals. That span saw the super sub shoot a resounding 83% from distance while averaging 16 points per. Toronto is going to need this production against Golden State in the NBA Finals.

The good news for a heavily-favored Warriors team is that it has length to counter Van Vleet in that of the 6-foot-7 Livingston. This could cause some struggles for Van Vleet to get open out on the perimeter. It really is something to watch.

With Durant sidelined to start the Finals, the onus is going to be on Thompson to guard Leonard. An All-NBA Second Team defender, this is not necessarily bad news for Golden State. Thompson has been tasked with guarding the opposing team’s top perimeter player during the team’s five year run of dominance.

Leonard is a bit different in that he’s heading into the Finals on an absolute role. The dude is averaging north of 30 points per game during the playoffs. With Iguodala set to go for Game 1 after missing the finale of the Western Conference Finals, the all-world defender will also have his turns on Leonard. It’s the biggest individual matchup of the Finals.