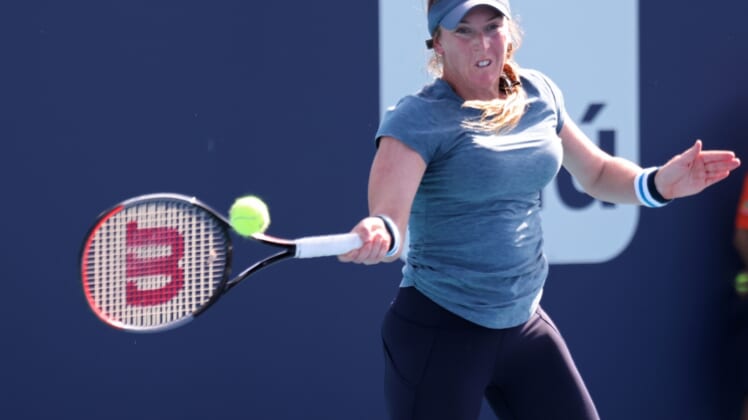 Top 5 seeds Sofia Kenin and Bianca Andreescu and No. 9 Belinda Bencic were all ousted from Wimbledon on Wednesday.

Fellow American Madison Brengle needed just 45 minutes to upset the fourth-seeded Kenin 6-2, 6-4 in the second round, while France’s Alize Cornet rolled to a 6-2, 6-1 victory over the fifth-seeded Andreescu of Canada in the first round at the All-England Club in London.

Brengle had just six winners — and only seven unforced errors — while beating a Top 10 player for the fourth time in her career. Meanwhile, Kenin repeatedly self-destructed with 41 unforced errors to go with 20 winners.

“I really did not feel my game,” Kenin said. “Of course, she played well. She’s playing well, obviously. I just feel like leading up to Wimbledon I didn’t have enough … preparation on the grass.

“I kind of had like a minor injury leading up to Wimbledon, which is why I had to pull out of Eastbourne. I didn’t really have much time to prepare on grass, and it’s unfortunate.”

Andreescu committed 34 unforced errors against 17 winners as she lost to Cornet for the second time this month. The other time was two weeks ago in Berlin.

This time, Cornet had an easy time, and ripped off 12 straight points in the second set to take control. She had 11 winners against seven unforced errors.

“I tried to stay positive the whole match,” Andreescu said. “I tried to figure it out, how I can play her better. But honestly, she played really well.”

Second-seeded Aryna Sabalenka of Belarus and third-seeded Elina Svitolina of Ukraine advanced but both had to go three sets. Sabalenka rallied for a 4-6, 6-3, 6-3 second-round win over Brit Katie Boulter, while Svitolina recorded a 6-3, 2-6, 6-3 first-round victory over Belgium’s Alison Van Uytvanck.

Seventh-seeded Iga Swiatek of Poland sailed to a 6-1, 6-3 triumph over Russian Vera Zvonareva and eighth-seeded Karolina Pliskova of the Czech Republic rolled to a 6-2, 6-2 win over Donna Vekic of Croatia in a pair of second-round matches.

No. 11 Garbine Muguruza of Spain was a 6-1, 6-4 winner over Lesley Pattinama Kerkhove of Netherlands in second-round play, while 12th-seeded Victoria Azarenka of Belarus beat Ukraine’s Kateryna Kozlova 6-1, 6-3 in a first-round match. No. 13 Elise Mertens of Belgium prevailed 6-2, 6-0 over China’s Lin Zhu in second-round play.

Among other American women playing in the second round, Venus Williams was sent packing as No. 21 Ons Jabeur of Tunisia posted a 7-5, 6-0 victory.