With Game 1 of the Eastern Conference Finals between the Cleveland Cavaliers and Toronto Raptors set to tip off, there’s a whole heck of a lot to look at in this titanic series.

Can Toronto maintain any resemblance of remaining fresh after playing two seven-game series prior to the conference finals? Will Cleveland show some rust after two consecutive series sweeps to start the postseason?

The game within the game here will be LeBron James’ attempt to earn a sixth consecutive trip to the NBA Finals with a rookie head coach calling the shots against the most-veteran of coaches in Toronto.

Equally as interesting, Toronto’s All-Star backcourt duo is going to have to keep up with what the Cavaliers can throw at this squad offensively. If that doesn’t happen, the Raptors’ hopes of an upset are all but thrown out the window.

Here are the top-eight storylines for the NBA Eastern Conference Finals.

1. The rested versus the weary 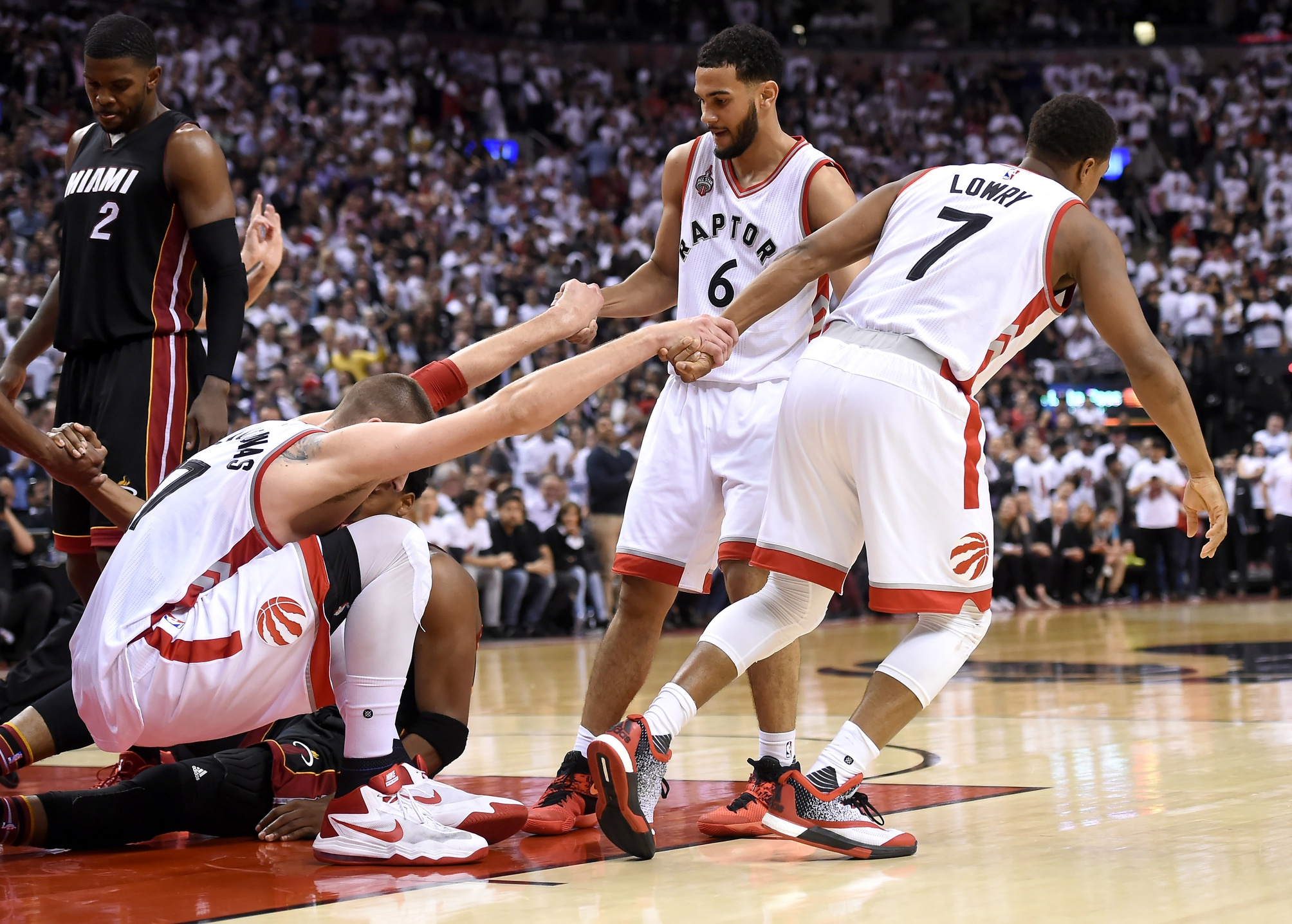 Cleveland played the least amount of games possible to reach the conference finals, sweeping both the Detroit Pistons and Atlanta Hawks en route to another opportunity to play for a title.

Meanwhile, Toronto played the most possible games, having to win Game 7 outings against both the Indiana Pacers and Miami Heat to reach the conference finals.

That’s all fine and dandy. It tells us a story of two teams heading into this series in completely different situations. It also might not mean a whole lot in the grand scheme of things.

Though, the total number of minutes played for the stars on each team should be an indicator that Cleveland will be more spry in the series.

LeBron James has played 310 minutes in the postseason with Kyrie Irving ranking second on the Cavs at 291 minutes. On the other hand, Kyle Lowry has played 553 minutes with DeMar DeRozan seeing action for 522 minutes for Toronto. That right there is the crux of the issue for Toronto.

Based on his average action per outing, Lowry has played about 6.6 more games than Irving in the playoffs. That should have a direct impact on how this one-on-one battle will go.

If the Cavaliers shoot at anywhere near the clip we have seen in the first two rounds, they will sweep Toronto. That’s the whole idea of basketball. Scoring more points and shooting at a high clip than your opponent. This is what Cleveland has done at a record clip thus far.

They broke the single-game NBA record with 25 threes in Game 2 against the Hawks, hitting on a total of 62 in the series.

What is amazing here, Kevin Love shot just 4-of-31 from inside the three-point line in the series. Meanwhile, he hit at a 47.5 percent clip from beyond the arc. Despite averaging just one two-pointer per outing, Love put up an average of over 19 points per game in the series. That’s utterly absurd.

Overall, Cleveland averaged 57.8 points from beyond the three-point line compared to just 40.5 on two pointers in the series.

The key here has been spacing. Cleveland has found a way to mirror what the Warriors do out west, and the results have been extraordinary.

It will be interesting to see how the Raptors game plan against this. The good news here is that they have an elite-level wing defender in DeMarre Carroll, who has shut James down to some extent in recent years.

That’s going to be key. Atlanta had to focus too much attention on James’ driving ability, which left Cleveland’s perimeter shooters open for uncontested threes:

No one is going to pretend that Miami boasts the same outside scoring potential as Cleveland. Comparing the two would be apples/oranges. Though, it’s important to note that Toronto held the Heat to 29 percent shooting from three.

Equally as important, off-ball screens will be key to Cleveland’s success here. If it is able to have the same success as we have seen thus far during the playoffs, the Cavaliers will be defending their conference title.

It goes without saying that stopping the ball movement and limiting Cleveland’s spacing on offense will go a long way in helping Toronto pull the upset.

3. The struggles of Toronto’s backcourt 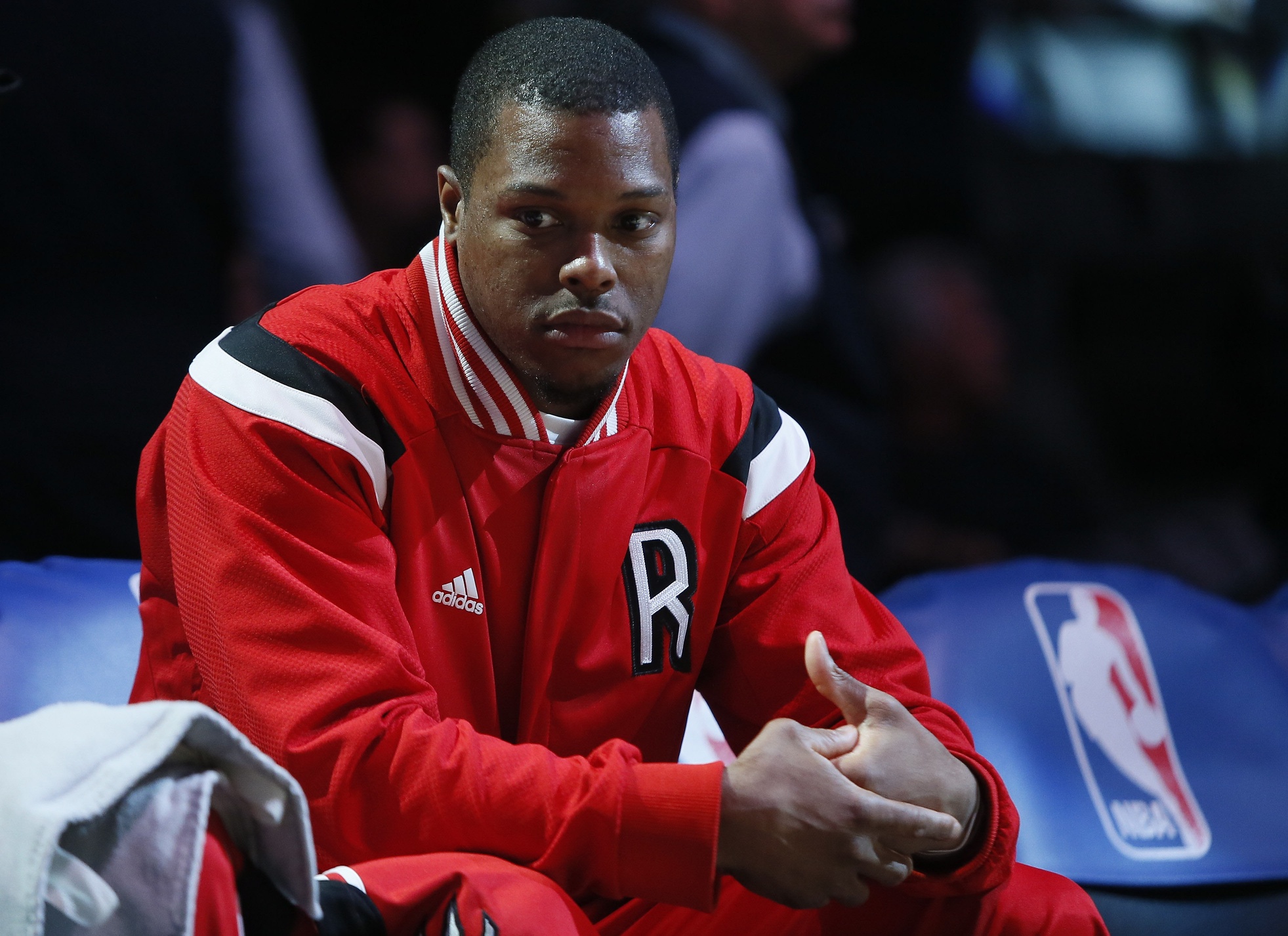 Even after upping his performance somewhat in the conference semifinals, Lowry is shooting just 37 percent from the field and 28 percent from three-point range in the playoffs. Meanwhile, DeRozan is shooting at a 37 and 18 percent clip respectively.

Heck, top backup Cory Joseph is coming off a 0-of-8 performance in Game 7 against Miami on Sunday.

As good as Bismack Biyombo has been performing recently, you simply can’t expect much from him on offense. And with Jonas Valanciunas out at least the first two games of the series due to a sprained ankle, this takes on even more meaning.

While Toronto might be looking to get production from Carroll on offense, it’s important to note that he will be exhausting a ton of energy guarding James on the defensive end of the court. Simply put, anything he provides on offense will be gravy.

In this, the Raptors must get their two All-Star back up and going in this series if they are going to have a chance to upset Cleveland. This is the primary key moving forward.

Cleveland wants a chance to take out Golden State in the NBA Finals after losing to the defending champs short-handed last June. This is going to require both the Cavaliers and Warriors defeating what should be game competition in their conference title bouts.

For the Cavaliers, it’s all about continuing the momentum that led them to eight consecutive wins to start the playoffs.

That first opportunity will come after a full eight days off. They will be doing so against a Raptors team that has played four games since Cleveland last suited up. This is a golden opportunity for the defending conference champions to assert their presence early in the series, especially at home.

Though, the Raptors have a real opportunity here as well. Let’s say Cleveland is rusty after having so many days off. Could Toronto pull off a win in one of the first two games before traveling back to Canada for the next two? If so, that will put the Cavaliers in an unfamiliar position of having to sweat out a series.

All said, the NBA would rather see Cleveland and Golden State match up in the Finals. This would represent a ratings coup for the league. In no way does that mean the Raptors are going to sit idly by and let this potentially imminent reality come true.

Of the four head coaches remaining in the playoffs, Toronto’s Dwane Casey has the most experience with five seasons under his belt.

Not that experience is the end all be all. Just look at Steve Kerr’s Warriors from a season ago. But this could potentially play a role in the outcome of the series.

Casey has almost literally been through every situation the playoffs can offer during his career with the Raptors. On the other hand, Lue hasn’t even had to deal with the events surrounding a single postseason loss.

With veterans Jim Boylan and Larry Drew representing a combined half of century of NBA coaching experience on his staff, Lue can easily rely on what they bring to the table. This could potentially limit the disadvantage Cleveland’s head coach has from an experience standpoint.

6. How will the series be called? 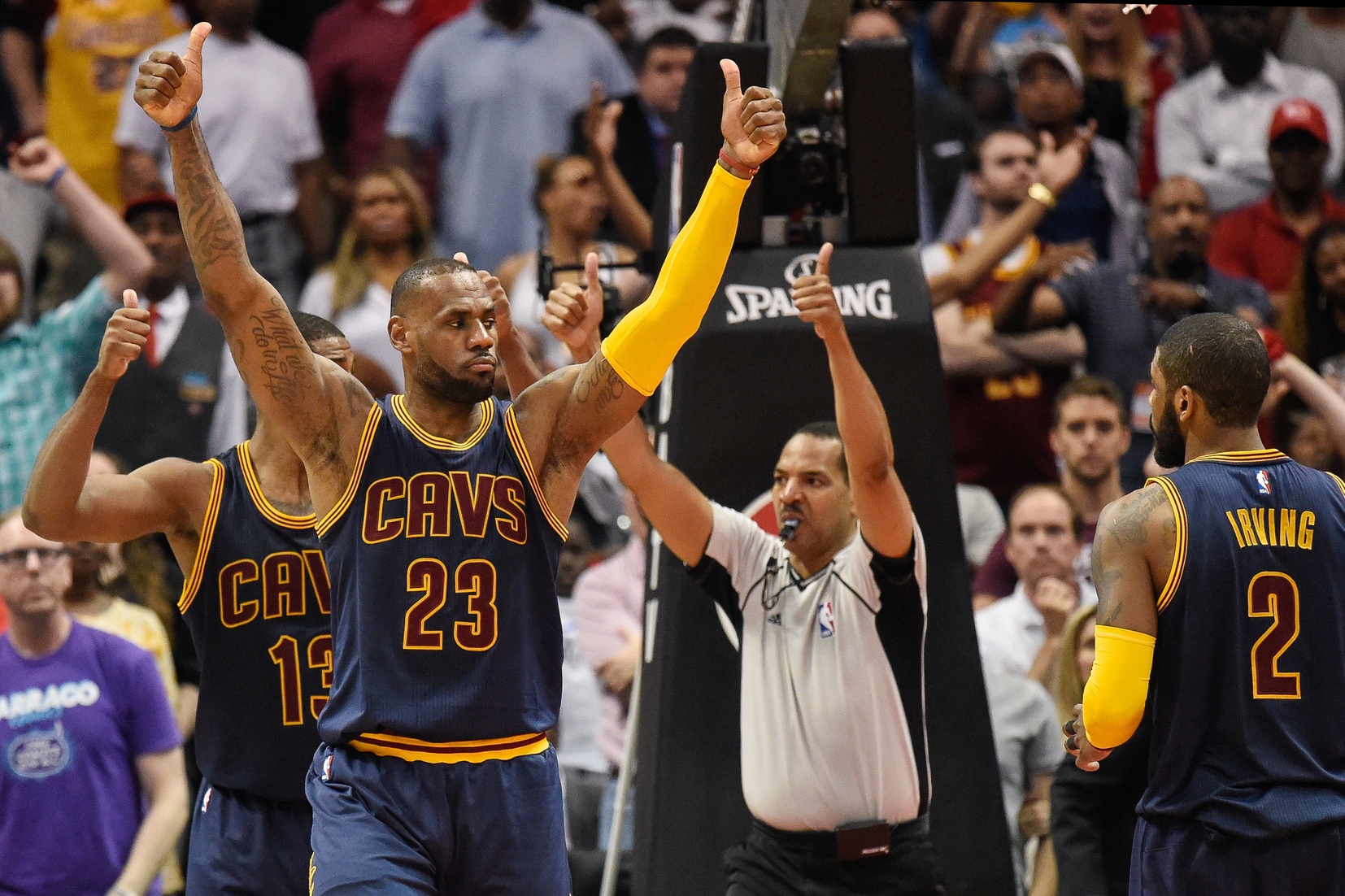 We already know the divisive issue surrounding the quality of NBA officiating in the playoffs. In short, it’s been absolutely abysmal. This isn’t going to focus on that not-so-secret reality. Instead, we want to check in on how the series itself will be called.

If the game is called tight, it should benefit Toronto. That will slow down the tempo and play to the Raptors’ strengths. And while we can’t read too much into points in the paint here because of Cleveland’s excellence from the perimeter, it is important to note that the Hawks outscored the Cavaliers by 52 points in the paint in the conference semifinals.

In reality, Cleveland doesn’t have that post-up option outside of James on the roster. If the defenses are allowed to play, especially in isolation, this will actually help Cleveland. That’s magnified by the team’s spacing and the passing ability of both Irving and James.

Though, it’s all about tempo. If it’s an up-and-down game, the Cavaliers will run Toronto off the court. If not, the Raptors could very well hang with the favorites. A lot of that will depend on how the game itself is called.

James is looking to make his sixth consecutive trip to the NBA Finals and the seventh of his illustrious career.

What makes this so amazing is that this could be James’ third trip to the Finals with Cleveland, having gone their four times with Miami in between his first and second appearances with the Cavaliers.

Rarely do we see a play define domination in one specific conference with multiple teams like James has. Sure, Michael Jordan earned six titles with the Chicago Bulls. But that was with one team, and pretty much one supporting cast.

The only real comparison here could be Kobe Bryant, who earned multiple conference titles out west with different supporting casts.

For James to etch his name into the history books, he’s going to have to not only win this series against Toronto, he must earn that third NBA title.

If not, he will be known by some skeptics as the player who rode the coattails of Dwyane Wade and Chris Bosh in Miami.

While most of us know this is far from the truth, it’s going to be the narrative that follows James around for the rest of his career.

While we know who the big-time keys in this series are, it’s going to be the supporting casts who help dictate the outcome.

Toronto will only stand a chance in this series if both Lowry and DeRozan play up to their capabilities, but they are going to need a third wheel to come through in order to pull the upset.

The focus for DeMarre Carroll will be on the defensive end of the court. That much is already well known. It is, however, important to note that he averaged 10.7 points during the Heat series.

More than providing that double-digit scoring punch, it’s going to be all about Carroll making the most of his opportunities when he does shoot. He’s shooting at just a 43 percent clip in the playoffs.

Equally as important for Toronto is the interior presence of Bismack Biyombo. While the backup center won’t see many plays called for him, he can provide a major punch for Toronto by continuing to grab offensive boards and creating extra possessions.

Interestingly enough, Biyombo has put up double-digit points in three of the four games since Jonas Valanciunas injured his ankle. Anything close to that type of production will be huge for the Raptors.

In Cleveland, we already know it’s about the big three. This team is unbeatable if Irving, Love and James are playing the way we saw in the first two rounds.

However, it’s unrealistic to believe all three will be on top of their games at the same time in the conference finals.

In this, someone like J.R. Smith will have to step up as another scoring option.

After averaging 17.5 points in the first two games against Atlanta last round, Smith put up a total of just nine points on 3-of-8 shooting in the final two outings.

That’s going to have to change here, especially if we are to assume that Toronto will be up to the task here.