Fresh off a disastrous loss to the Golden State Warriors in the Western Conference Finals, rumors are starting to heat up regarding where Oklahoma City Thunder forward Kevin Durant will play next season.

Is he going to look to maximize his earning potential be re-signing with the Thunder on a short-term deal? If not, who might be the favorites to land the former MVP?

We have heard the rumors linking him to the Golden State. We have also seen the state of Texas and its three NBA teams mentioned as possibilities.

With the start of NBA free agency coming up here soon, these rumors are going to ramp up in no time. Here’s a look at the eight most-likely landing spots for Durant this summer. 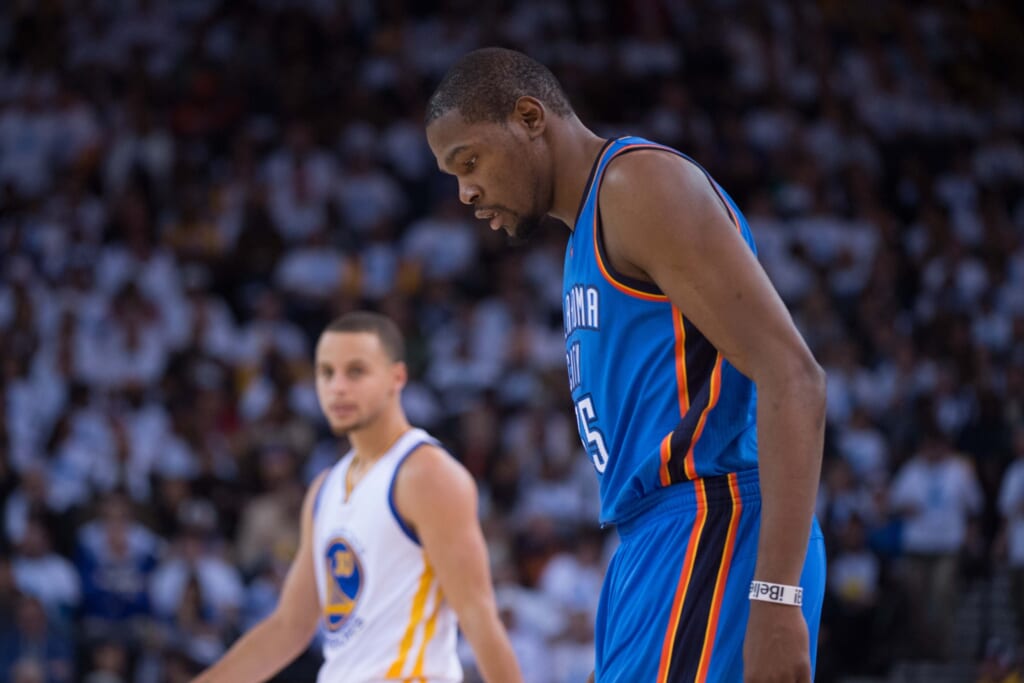 From a pure financial perspective, it makes perfect sense for Durant to re-sign with Oklahoma City on a one-year deal with a player option for another season. We saw LeBron James do this with the Cleveland Cavaliers last summer.

The idea is to maximize the value of your short-term contract while finding yourself on the free-agent market as the cap continues to increase each summer.

Outside of this and the potential that Durant’s heart is in Oklahoma City, it doesn’t make a whole bunch of sense for the former MVP to re-sign with the team.

The Thunder are coming off a complete meltdown at the hands of the Golden State Warriors in the Western Conference Finals. It’s a series that saw the good and the bad of the partnership between Durant and Russell Westbrook come into play.

While supremely talented, there’s now a serious question regarding the ability of this duo to win a title together.

Whether it’s the San Francisco Bay Area, Los Angeles or Miami, endorsement opportunities and brand recognition are much more viable in those locations than in Oklahoma. That much cannot be denied.

It will come down to two factors here. First, Durant’s faith that the Thunder can contend for a title over the short term. Second, whether he sees a long-term future in Oklahoma or is just delaying the inevitable.

An abundance of stories came out prior to the 2015-16 season indicating that the Warriors were on Durant’s short-list. In fact, one report suggested that members of the defending champs believed he would ultimately land in Oakland.

Both Stephen Curry and Andre Iguodala have made interesting remarks recently regarding Durant.

It’s also important to note that facing the Warriors in the recently-concluded conference finals may actually be a major draw for Durant to Oakland.

Remember, it was immediately after his Denver Nuggets lost to the Warriors in 2013 that reigning NBA Finals MVP Iguodala decided to join Golden State. That decision came largely due to the atmosphere Iggy saw in Oakland in the playoffs.

ESPN’s Marc Stein even suggested that the Warriors will be among the many teams interested in Durant this summer.

In this, we simply can’t throw out the idea of the former MVP joining the two-time reigning MVP in Northern California.

Though, a lot would have to work out in order for this to happen.

First off, Golden State will have to decide to move on from Harrison Barnes and potentially Festus Ezeli, both of whom are slated to become restricted free agents.

Secondly, the defending champs would then have to find a trade partner for Andrew Bogut while taking nothing of substance back in terms of a contract.

One thing we have seen from the Warriors front office and ownership group is the willingness to put the best possible squad together on the court. If they decide that includes Durant, we simply can’t throw this idea out the window.

The Heat have a lot to worry about when it comes to their roster this summer. Will Chris Bosh be able to return after yet another serious health scare? Can the team re-sign up-and-coming center Hassan Whiteside? Will Dwyane Wade take a pay cut in his imminent return to South Beach?

These questions will help dictate whether Miami is even in the hunt for Durant when free agency comes calling.

A report during the spring indicated that the Heat are worried Bosh won’t be able to return to the court following yet another blood clot issue.

Even if that’s the case, the team would still be on the hook for his $22.2 million salary next season unless he decides to hang them up for good.

Miami would then file a petition to have the remainder of Bosh’s contract ($52 million over the next two seasons) wiped from the books. This would set into motion a very busy summer of 2017 for the Heat. Though, it would also have very little impact on what happens this summer.

The only real scenario in play here would be Wade taking a significant pay cut in free agency with the Heat finding a trade partner for Goran Dragic.

If that were to happen, the team could potentially re-sign Whiteside while adding Durant in free agency. Much like in Oakland, there’s a lot of moving parts here.

While the Lakers brand isn’t the same draw as it used to be, the Southern California market represents a potential cash cow for Durant off the court.

As the second-largest media market in the United States, he’d be taking over as a face of a franchise that’s boasted some of the best players to ever suit up in the NBA. If you don’t think that’s a draw, I am not really sure what to tell you.

There’s also something about attempting to build a program from the bottom up. Los Angeles has a solid young duo in D’Angelo Russell and Julius Randle. It also boasts the second overall pick in the upcoming draft.

While Durant signing with the Lakers would represent more of a long-term vision, his addition to this group could enable the team to contend for a lower seed in the playoffs next season.

This might be completely out of left field. After all, Orlando itself isn’t a huge market. With that said, there are some solid building blocks on this roster.

Oladipo, 24, averaged 16.0 points, 4.8 rebounds and 3.9 assists per game last season. He can play anywhere from the point guard position to small forward, making his presence on any Durant-led Magic team inevitable.

Meanwhile, Vucevic has to be considered one of the most-skilled true centers in the NBA. He’d fit well in with what Durant does.

Depending on how everything plays out, the Magic could be as much as $50 million under the cap this summer. That figure would enable the team to add two max-contract players to go with this dynamic young duo.

If one of those players were Durant, that could be enough to put the team in contention in a weak Eastern Conference.

Though, we still have to go back to the whole small-market thing here. While considerably more attractive from brand recognition standpoint than Oklahoma, Orlando isn’t much to write home about.

This would take some work. First off, it would require Tim Duncan to call it quits with the Spurs also deciding to move on from Tony Parker and Manu Ginobili.

Based on how each of these players performed in 2015-16, it wouldn’t necessarily represent a big loss on the court.

As of right now, the Spurs have to be considered Kawhi Leonard’s team with LaMarcus Aldridge coming in as the team’s second option.

While adding Durant would likely force either Leonard or himself to play the four, it’s a situation that could potentially work out.

The only real issue here would be finding a supporting cast should the team’s three veterans depart one way or another.

Durant, Leonard and Aldridge would represent over two-thirds of the team’s cap. Add in a combined $21 million for Patty Mills, Danny Green and Boris Diaw, and there’d be very little left to fill out the roster.

This means that the Spurs would have to use assets (draft picks) to move one or two of these contracts while taking nothing back in salary. That’s a less-than-ideal scenario as it would create even more issues as it relates to depth.

At some point in the not-so-distant future, Dallas is going to have to find someone to carry the franchise forward. While Dirk Nowitzki surely played inspired basketball this past season, the 37-year-old forward is no longer the centerpiece on a title-contending team.

There’s some good news to be had here. Dallas might have the cap room to add Durant on a max deal without having to rework the remainder of its roster. He also played college ball in Texas, which could be luring for the former MVP.

Both Nowitzki and Chandler Parsons can opt out of their contracts this summer. That would save the Mavericks over $33 million in cap room.

Under this scenario, the idea would be for Dallas to re-sign Dirk at a lower price with Parsons either looking to collect big time on the open market or remaining in Texas.

How those two situations play out will be the premise for Durant to Dallas rumors to heat up. Should the Mavericks receive the good fortune of seeing Parsons opt out, that would open up the possibility of adding Durant.

Much like every team in this article, there are a lot of moving parts here. Durant likely wouldn’t come to Dallas if it meant him teaming up solely with Dirk as the face of the franchise. The team would have to add even more pieces to an aging and talent-stricken roster.

Going from one small market to another doesn’t seem to make much sense. If Durant was intent on avoiding the big city lights, it would make more sense for him to stay in Oklahoma.

That’s until we realize that the Durant-Westbrook relationship may be maxed out at this point. Will the two ever win the title together? It’s a serious question that needs to be asked.

A dominant guard in his own right, Damian Lillard may fit better with what Durant does on offense, primarily the MVP’s willingness to get others involved. Just imagine Durant, Lillard and C.J. McCollum on the perimeter together? That’s a whole lot of shooting ability.

With what should be over $35 million in cap room, the Blazers are in a prime position to add an elite player in free agency. It just remains to be seen whether Durant will choose the small-market Portland area over bigger media draws and higher earning potential elsewhere.