Top 5 Storylines for the 2015 NBA Finals

As we wait for the 2015 NBA Finals to begin between the Golden State Warriors and Cleveland Cavaliers, the coverage of the series promises to focus on every possible angle. This is only magnified by the full week off between the conference finals and the championship series.

From two first-year head coaches doing battle to championship droughts that combine for nearly a century without a title, here are the top-five storylines for the upcoming NBA Finals

NBA Finals: For LeBron James it's About More Than the Ring http://t.co/nFkhQJFDft pic.twitter.com/dETfop7RT7

This is one of the most over-hyped stories of the entire playoffs. James doesn’t have a legacy to worry about here. He’s earned six trips to the Finals, two championships and is a four-time NBA MVP. No matter what happens in James’ career from here on out, he’s going to go down as one of the greatest players ever.

This hasn’t stopped the media from focusing on LeBron’s legacy—a legacy that is impossible to define until he’s years removed from playing his final game in the NBA.

James will never be seen as Michael Jordan, who won six championships in as many NBA Finals appearances. He’s already played for two teams, so James’ legacy won’t be compared to what Kobe Bryant has done in his Los Angeles Lakers career.

However, a fourth loss in six NBA Finals appearances would likely taint James’ legacy in the mind of some skeptics—skeptics that usually find a way to throw shade at James no matter what he does on the court. In reality, those looking at what the NBA Finals might mean for James’ legacy refuse to accept him for the player he is right now. That’s the sad fact in a media age where criticism has become far too prevalent surrounding the two-time NBA champion.

At this point, we have no idea whether Thompson will be available for Game 1 of the NBA Finals on Thursday. After suffering a concussion in Game 5 of the Western Conference Finals on Wednesday night, Thompson must now go through the NBA concussion protocol in order to be cleared for action.

It’s also a protocol that is rightfully stringent.

* The return to participation protocol involves several steps of increasing exertion — from a stationary bike, to jogging, to agility work, to non-contact team drills.

* With each step, a player must be symptom free to move to the next step. If a player is not symptom free after a step, he stops until he is symptom free and begins again at the previous step of the protocol (i.e., the last step he passed without any symptoms).

Based on these guidelines and the reports that came out following Thompson’s injury, there is a possibility that he might not be able to play when the series starts on Thursday. Heck, there’s no guarantee that he will be available at all. For the Warriors, it’s a day-to-day approach.

If Thompson is unable to go, Andre Iguodala will likely start in his stead. While Iggy is a much better defender than Thompson and would do a great job defending J.R. Smith/LeBron James, you don’t lose an All-NBA performer without taking a hit. This could play a major role in the series. 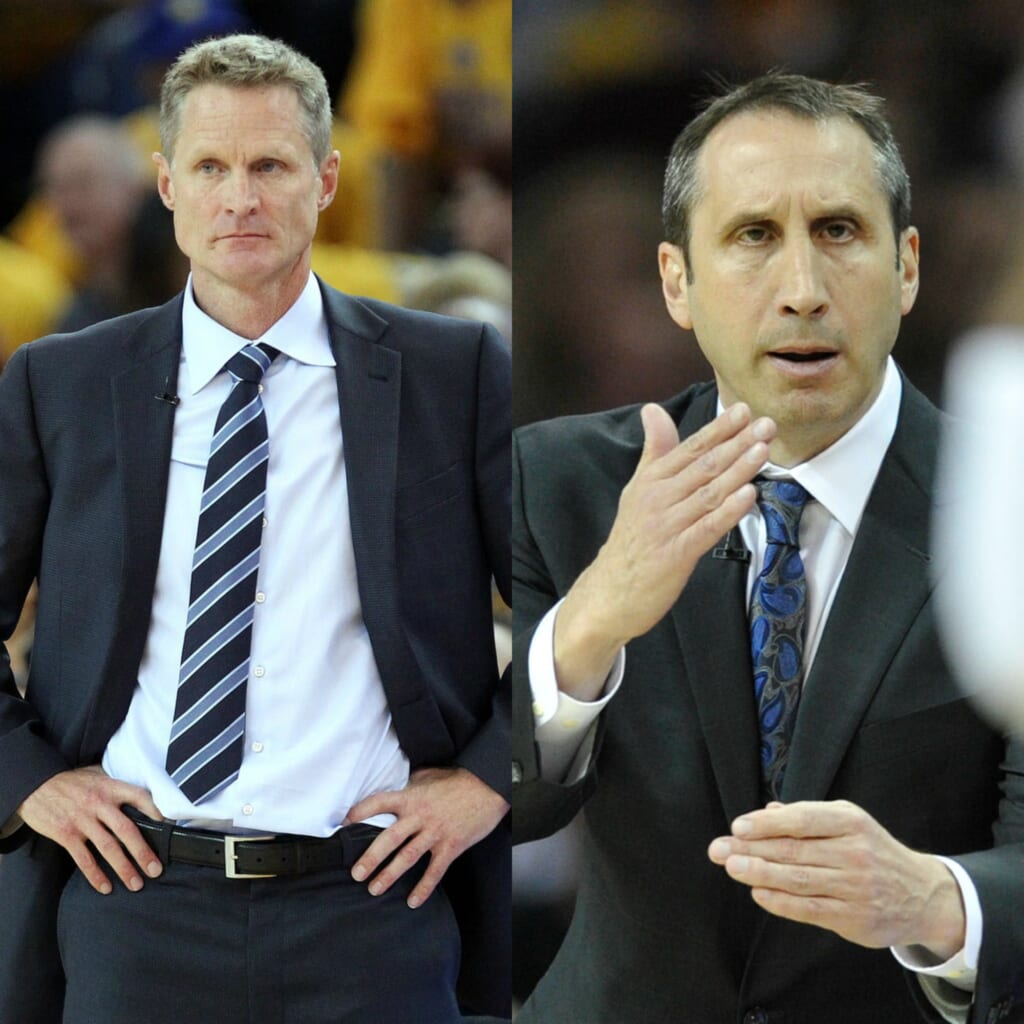 Courtesy of USA Today Sports: Two of the most successful first-year coaches in NBA history.

For the first time in history, two rookie coaches will meet in the NBA Finals, meaning we will witness history when all is said and done. Whoever wins the Finals will become the first coach to win a title in his first season as a head coach.

For David Blatt, it’s been a journey around the globe on his way to the association’s biggest stage. Starting as a player for Maccabi Haifa in Israel back in 1981 and continuing to Maccabi Tel Aviv as a coach up until 2014, Blatt’s career has been spent mostly overseas. It includes a seven-year stint as the head coach for Russia’s national team and a brief stop in Italy. Blatt even earned Euroleague Coach of the Year honors en route to leading Tel Aviv to a title last year. Needless to say, it’s taken a lot of work for the Cavaliers head coach to reach this grand stage.

Steve Kerr’s road is a little less traveled. A player in the NBA for 16 years, Kerr earned five NBA titles while suiting up for the Chicago Bulls (three) and San Antonio Spurs (two).

After Kerr’s playing career, he took to broadcasting for TNT in 2003. After a few years in the broadcast booth, Kerr eventually took over as the Phoenix Suns general manager in 2007. While not necessarily successful during his stint in Phoenix, it gave Kerr the necessary tools to understand the nuances of the game of basketball beyond the court.

Eventually, Kerr’s focus turned to coaching. After turning down multiple opportunities throughout the years, he finally settled on the Golden State Warriors. In leading his new team to 67 regular-season wins and a NBA Finals appearance, Kerr is one of the most successful first-year coaches in NBA history. What makes this even more amazing is the fact that he had no prior coaching experience, even as an assistant, at any level.

Warriors will become the 12th team in NBA history to win 79 games in a season.

The other 11 all won NBA titles.

Golden State finished the regular season with the sixth-most wins in NBA history. Of the other nine teams that have won 67-plus games during the regular year, seven went on to win the championship. And in part due to the extended NBA playoff structure, a series win over Cleveland would put the Warriors in uncharted waters. They would finish the year with 83 combined regular season and playoff wins—a number that would rank Golden State third in NBA history behind two of the Chicago Bulls teams of the mid 90’s.

This isn’t to say that Golden State should be considered one of the greatest teams in NBA history should it win the title. It just goes to show us just how amazing this run has been. Put it this way, the Warriors are 12-3 in the postseason—a winning percentage that is lower than what the team put up during the regular year.

The city of Cleveland has not seen a professional sports team earn a title since Jim Brown led the Browns to the championship in 1964. Needless to say, the Cavaliers have never won a title.

While Oakland has a bit more history as it relates to championships (seven since Cleveland last won a title), it hasn’t been a successful sports city in recent years. In fact, the Oakland Athletics World Series winning club from 1989 represents the last time this city hosted a professional sports championship. For the Warriors, it’s been 40 years.