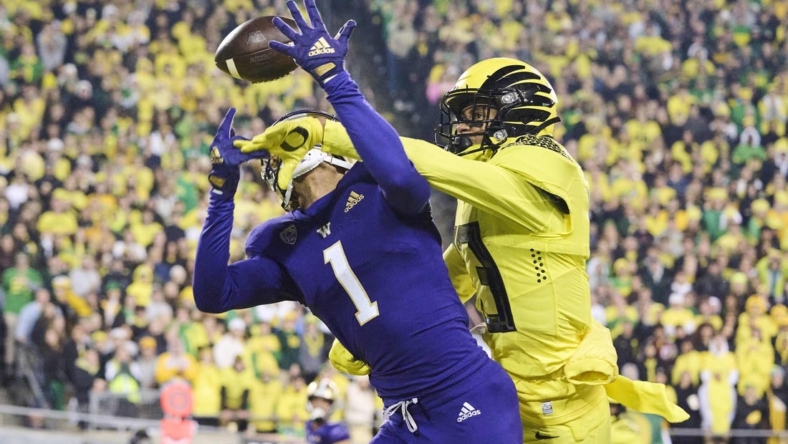 Peyton Henry provided the winning points with a 43-yard field goal as No. 25 Washington upset host No. 6 Oregon 37-34 in a back-and-forth game Saturday night in Eugene, Ore.

After the Huskies stopped Oregon on downs on the Ducks’ 34-yard line, Henry connected with 51 seconds remaining to lift Washington (8-2, 5-2 Pac-12) to its fourth straight win. The Ducks (8-2, 6-1) lost their first conference game and their College Football Playoff hopes took a big hit.

The Ducks had to play without star quarterback Bo Nix for a couple of minutes late in the game after he was tackled low on a run up the middle. He walked slowly off the field favoring what appeared to be a leg injury.

Nix came back with Oregon behind by three to try to lead a game-tying drive, but he couldn’t manage to get the Ducks in field-goal range.

The top-ranked Bulldogs clinched the SEC East Division title with a victory over the host Bulldogs in Starkville, Miss.

C.J. Stroud threw for five touchdowns and Miyan Williams ran for 147 yards before becoming the latest running back casualty when the Buckeyes defeated the Hoosiers in Columbus, Ohio.

Indiana backup quarterback Dexter Williams II replaced ineffective starter Connor Bazelak and led the Hoosiers to within 21-7 on his first series, with the help of his 16-yard run and a 49-yard catch by Andison Coby before tossing a 7-yard TD to AJ Barner. Dexter Williams was 6-for-19 for 107 yards and two TD passes for the Hoosiers, losers of seven straight.

Heisman Trophy hopeful Blake Corum rushed for 162 yards and a touchdown as the Wolverines rolled to a victory over the Cornhuskers.

Cornhuskers (3-7, 2-5) quarterback Chubba Purdy suffered a leg injury and was replaced by Logan Smothers, who threw for 15 yards on five completions.

Kendre Miller rushed for 138 yards, including a 75-yard touchdown run, and the defense did the rest as the visiting Horned Frogs upset the Longhorns in a key Big 12 game in Austin, Texas.

TCU (10-0, 7-0 Big 12) did just enough in a game that was ruled by the defenses for the first three quarters. Miller’s long touchdown run deep into the third quarter and a 31-yard scoring pass from Max Duggan to Quentin Johnston with 12:36 left were the deciding plays.

Texas (6-4, 4-3) quarterback Quinn Ewers threw for 171 yards and was intercepted once. He didn’t complete a pass until 4 1/2 minutes into the second quarter.

Hendon Hooker passed for 355 yards and three touchdowns and also rushed for a score to lead the host Volunteers to a victory over the Tigers in Southeastern Conference play at Knoxville, Tenn.

Brady Cook completed 19 of 32 passes for 217 yards and two TDs and rushed for 106 yards for Missouri (4-6, 2-5). Tauskie Dove and Dominic Lovett caught TDs and Luther Burden III ran for a TD.

Josh Williams rushed for 122 yards and a touchdown to help the Tigers record a Southeastern Conference win over the Razorbacks in Fayetteville, Ark.

The Tigers (8-2, 6-1 SEC) won their fourth consecutive game to clinch the SEC West title. Harold Perkins Jr. ended Arkansas’ final chance when he recorded his fourth sack, forcing quarterback Cade Fortin to fumble the ball that the Tigers recovered at the Arkansas 44.

Arkansas (5-5, 2-4) played without starting quarterback KJ Jefferson, who has been hampered by a shoulder injury. Fortin completed 8 of 13 passes for 92 yards and a touchdown.

Will Reichard kicked two of his three field goals in the fourth quarter, the defense stopped the Rebels in the red zone late and the Crimson Tide held on for a victory in Oxford, Miss.

The Crimson Tide (8-2, 5-2 SEC) trailed 10-0 but fought back behind Bryce Young’s touchdowns to Cameron Latu, Jermaine Burton and Ja’Corey Brooks. Ole Miss (8-2, 4-2) drove to the Alabama 14-yard-line, but on fourth-and-16 from the 20, defensive back Brian Branch broke up a pass in the end zone intended for Jonathan Mingo to seal the win with 46 seconds left.

Young was 21 of 33 for 209 yards and crafted his first 3-TD game since Sept. 24 against Vanderbilt when he tossed four. Jaxson Dart was 18 of 31 for 212 yards with a TD to Mingo. Malik Heath caught six passes for 123 yards, while Quinshon Judkins ran for 135 yards on 25 carries and tallied twice, giving him a school-record 15 rushing TDs in a season.

DJ Uiagalelei threw for a touchdown and ran for another to help the Tigers record a victory over the Cardinals.

Uiagalelei completed 19 of 27 passes for 185 yards for the Tigers (9-1, 7-0 ACC) and connected with Antonio Williams for his lone touchdown strike in the second quarter. Williams caught 10 passes for 83 yards.

The Cardinals (6-4, 3-4) had to adjust without Malik Cunningham, who exited in the first half with a shoulder injury. Brock Domann replaced Cunningham and threw for 175 yards.

Jayden de Laura passed for 315 yards and two touchdowns, and the Wildcats made a last-second stop as they eliminated any College Football Playoff hopes for the Bruins with an upset in Pasadena, Calif.

UCLA (8-2, 5-2 Pac-12) began its final drive at its 28 with 1:07 left and no timeouts. The Bruins reached the Arizona 29, but Dorian Thompson-Robinson threw four incomplete passes, including a heave to a diving Jake Bobo at the back of the end zone on the final play.

Tavion Thomas rushed for a career-high 180 yards and scored two touchdowns to lead the Utes to a convincing victory over the Cardinal in Pac-12 play at Salt Lake City.

Cameron Rising completed 20 of 33 passes for 219 yards, three touchdowns and one interception as the Utes (8-2, 6-1 Pac-12) scored the game’s final 42 points. Simote Pepa had two of the Utes’ seven sacks.

Tanner McKee completed 11 of 23 passes for 155 yards and rushed for a touchdown for Stanford (3-7, 1-7), which clinched a losing campaign for the third time in four seasons. Elijah Higgins caught seven passes for 105 yards.

Penn State made life miserable for Maryland quarterback Taulia Tagovailoa, sacking him seven times and causing him to finish 11-of-22 passing for 74 yards. Roman Hemby managed 68 rushing yards for Maryland, which has dropped two in a row.

Drake Maye threw for three touchdowns and ran for one, but it took a late field goal for the Tar Heels to pull out the victory over the host Demon Deacons in Winston-Salem, N.C.

Emmett Morehead threw for 330 yards and three touchdowns as the Eagles upset the Wolfpack.

Morehead completed 29 of 48 passes with two interceptions for the Eagles (3-7, 2-5 ACC) as they snapped a four-game slide. The Eagles also broke a 15-game losing streak to ranked opponents.

Wolfpack (7-3, 3-3) quarterback Morris finished with 135 passing yards while completing 12 of 24 passes. He also rushed for 22 yards. Michael Allen paced the rushing attack with 77 yards on 14 attempts, while Jordan Houston rushed for 71 yards on 14 touches.

John Rhys Plumlee ran for two touchdowns and threw for another to lead the Knights over the Green Wave.

Plumlee rushed for 176 yards, including touchdowns runs of 67 and nine yards and went 17-for-30 passing for 132 yards for UCF (8-2, 5-1 AAC). Javon Baker had five receptions, including an 8-yard touchdown, for 54 yards for the Knights, who have won eight of their past nine games.

Michael Pratt went 23-for-39 passing for 236 yards and three scores for Tulane. Tyjae Spears ran for 130 yards on eight carries and Jha’Quan Jackson had five receptions for 95 yards for the Green Wave (8-2, 5-1), who ended their five-game winning streak.

Will Howard threw three touchdown passes as the Wildcats routed the Bears in Waco, Texas. Kansas State kept hope alive for a berth in the Big 12 Championship Game Dec. 3 in Arlington, Texas.

Baylor (6-4, 4-3) had won three straight games entering Saturday to move into a tie for second place in the conference with Kansas State and Texas. Baylor quarterback Blake Shapen was 22-for-38 for 203 yards with two interceptions.

Drew Pyne accounted for five total touchdowns as the Fighting Irish defeated the Midshipmen in Baltimore.

Pyne completed 17 of 21 passes for 269 yards and four touchdowns. He also added a rushing touchdown for the Fighting Irish (7-3), who have gone 6-1 since opening the season with back-to-back losses to Ohio State and Marshall.

Pyne and Notre Dame scored all 35 points in the first half and seemed to be in cruise control in the second half as Navy furiously pushed back but had its comeback bid ended after it failed to recover an onside kick with 1:21 remaining. Daba Fofana rushed for 133 yards on 15 carries and scored a touchdown for Navy (3-7).

Aidan O’Connell connected with Payne Durham for a pair of touchdowns, including the decisive score, as the Boilermakers upset the Fighting Illini.

O’Connell finished with 237 yards and three touchdowns on 25-for-40 passing, while Durham hauled in seven of those completions for 70 yards for Purdue (6-4, 4-3 Big Ten). Devin Mockobee added a rushing touchdown and gained 106 yards on 28 carries.

Fighting Illini (7-3, 4-3) quarterback Tommy DeVito completed 18 of 32 passes for 201 yards with a touchdown and an interception. Chase Brown rushed for 98 yards and two TDs on 23 carries, snapping a streak in which he had gone for over 100 yards on the ground in 10 straight games.

Jordan Travis had three passing touchdowns and added scores rushing and receiving as the Seminoles slammed the host Orange.