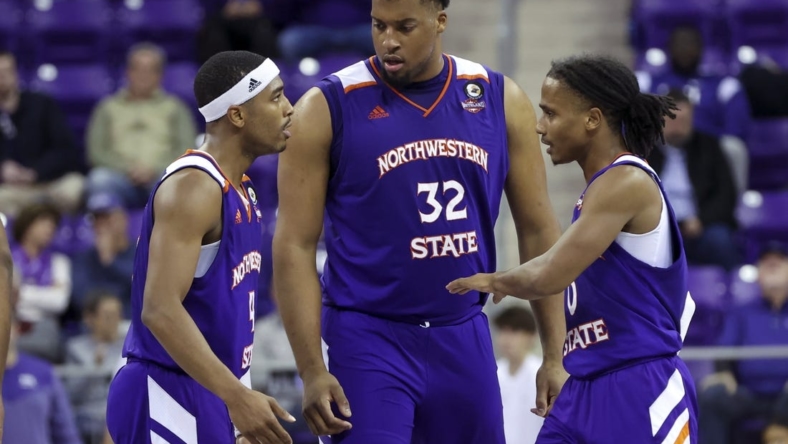 Ja’Monta Black scored 25 points and Demarcus Sharp added 19, including the go-ahead basket with 1:14 to go, to help visiting Northwestern State upset No. 15 TCU 64-63 on Monday night at Fort Worth, Texas.

TCU played without leading scorer Mike Miles, who missed the game due to an undisclosed injury, and Damion Baugh, who’s serving a six-game suspension imposed by the NCAA for signing with an NBA certified agent after last season.

Tramon Mark had 23 points and Marcus Sasser added 19 as the Cougars cruised to a victory over the visiting Golden Eagles.

DeShang Weaver had 12 points and five rebounds for Oral Roberts (1-2), while Connor Vanover scored all of his 11 points in the first half. The Golden Eagles had one field goal in the final 12 minutes of the second half, missing 17 shots in that time. Max Abmas, the Summit League Preseason Player of the Year, was held to three points on 1-for-13 shooting.

The victory was the 400th at Baylor for coach Scott Drew, who is in his 20th season at the school. Adam Flagler recorded 13 points, 10 assists and three steals for Baylor (3-0). Keyonte George contributed 12 points, seven rebounds and six assists and Dale Bonner added 12 points and six steals.

Six players scored in double figures for the Bruins, who went on a 23-4 run over the first 11 1/2 minutes of the second half en route to a blowout of the Spartans in Los Angeles.

The Bruins never trailed, but faced a challenge through the first half from the reigning two-time Mid-Eastern Athletic Conference champion Spartans. Jaylen Clark had a game-high 19 points on another strong all-around game from the Bruins wing. Bruins veterans Jaime Jaquez Jr. and Tyger Campbell scored 12 and 11 points, respectively, while freshman Amari Bailey added another 11 points.

Kris Bankston led Norfolk State with 17 points on 8-of-11 shooting from the floor while matching Clark’s game-high of nine rebounds. Cahiem Brown added 13 points off the bench.

Ryan Kalkbrenner scored 22 points on 10-for-10 shooting as the Bluejays cruised to a victory over the Crusaders in Omaha, Neb.

Kalkbrenner, a 7-foot center, is now 20-for-21 over his past two games. Arthur Kaluma and Ben Shtolzberg posted 13 points apiece as 11 different players scored for Creighton (3-0). Ryan Nembhard had a career-high 12 assists.

Terrence Shannon Jr. scored a game-high 30 points and the Illini roared out to a 30-point halftime lead in a rout of the Hawks in Champaign, Ill.

Shannon, a Texas Tech transfer, rolled up 21 in the first half, when the Fighting Illini established a 63-33 lead by hitting 23 of 30 shots from the field. Illinois’ defense also created a whopping 17 first-half turnovers that were cashed in for 22 points.

Freshman Andrew Ball scored 13 points in a reserve role to lead the Hawks, who are playing their first season as a member of the Colonial Athletic Association. Another freshman, Jack Collins, added 12 points.

Kevin Obanor and De’Vion Harmon scored 15 points apiece to help the Red Raiders defeat the Bulldogs in a rough-and-tumble game in Lubbock, Texas.

The Red Raiders, who improved two spots in the AP poll released early on Monday, led by five points at halftime but by just a bucket six minutes into the second half. Pop Issacs added 10 points for Texas Tech, which limited the Bulldogs to 37.7 percent shooting from the floor and outrebounded Louisiana Tech 35-26.

Cobe Williams had 16 points for the Bulldogs, while Kenny Hunter hit for 10 in the loss. Louisiana Tech made just one of its final seven field-goal attempts and never led in the game.