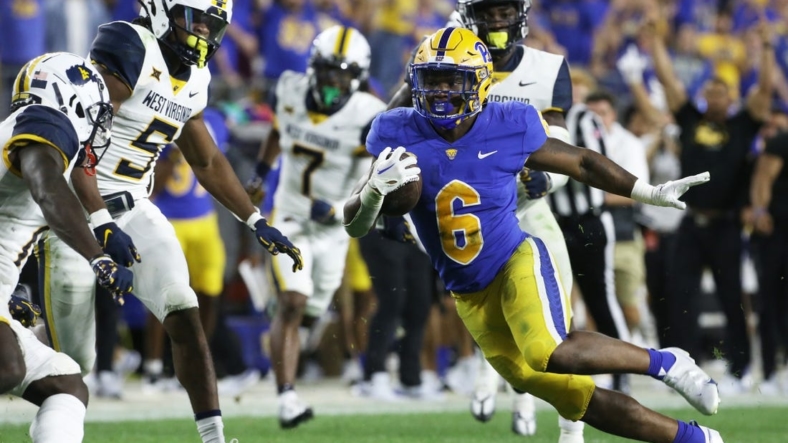 M.J. Devonshire returned an interception 56 yards for a tiebreaking touchdown with 2:58 to play as No. 17 Pitt pulled out a 38-31 victory over West Virginia on Thursday in Pittsburgh.

In a back-and-forth battle, the Panthers (1-0) wound up outlasting the Mountaineers (0-1), snapping a three-game losing streak in the Backyard Brawl, which hadn’t been played since 2011.

Down 24-17 late in the third quarter, West Virginia put together two lengthy touchdown drives to go up 31-24 with 10:37 to play. JT Daniels’ 16-yard scoring pass to Bryce Ford-Wheaton leveled the score, and then Daniels’ 1-yard run gave the Mountaineers a seven-point lead.

Southern California transfer Kedon Slovis led Pitt on a seven-play, 92-yard drive, connecting on a 24-yard touchdown toss to Israel Abanikanda with 3:41 left. Following the kickoff, on the Mountaineers’ second play from scrimmage, Daniels threw a pass that bounced off Ford-Wheaton’s hands, popped up in the air and was picked off by Devonshire.

Spencer Sanders accounted for six touchdowns (four passing, two rushing) to help lead the Cowboys to a season-opening home win over the Chippewas.

Sanders finished 28 of 41 for 406 yards and ran for 57 yards. Braydon Johnson caught six passes for 133 yards, including a 14-yard touchdown.

Mitch Griffis threw three touchdown passes in his first collegiate start and the Demon Deacons began the season with a romp over visiting Virginia Military Institute in Winston-Salem, N.C.

Christian Turner ran for two touchdowns and rushed for 100 yards on 13 carries to boost the Demon Deacons, who started the season with their highest preseason ranking in program history.

Griffis was thrust into the starting role after standout quarterback Sam Hartman was sidelined with an undisclosed medical condition shortly after practices began last month. Hartman has attended practices and the opening game, and coach Dave Clawson said he’s expected to play this season, but no timetable has been revealed.