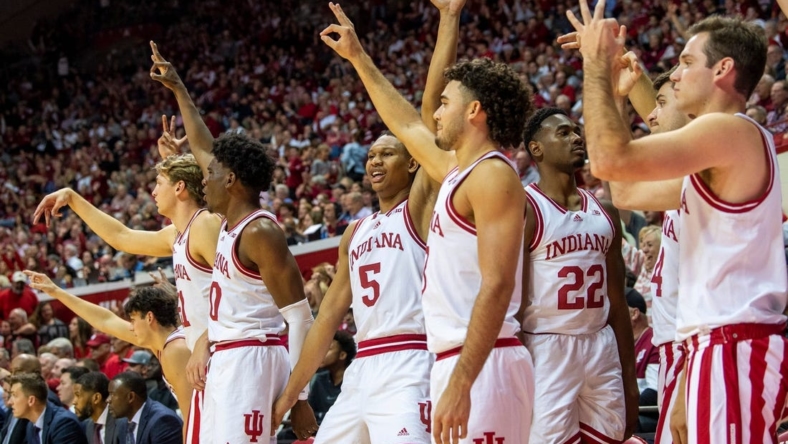 Trayce Jackson-Davis missed just one shot on his way to 21 points in a light workout for No. 13 Indiana, which breezed past Bethune-Cookman 101-49 on Thursday night in Bloomington, Ind.

Jackson-Davis went 9 of 10 from the field and was aided by wingman Miller Kopp, who made 4 of 6 from 3-point range to add 12 points for Indiana (2-0). Twelve players scored for the Hoosiers. Jalen Hood-Schifino kicked in eight points, eight assists and five rebounds for Indiana.

Pace favored the thoroughbred Hoosiers from the opening tip, and Indiana ended with 27 assists on 35 field goals.

Bethune-Cookman (0-2) was paced by Joe French with 11 points and Marcus Garrett with 10.

Jalen Wilson scored 11 points in the first eight minutes of the game as the Jayhawks demolished the Bison in Lawrence, Kan.

Wilson finished the first half with 17 points and led the Jayhawks with 21 points for the game, though he sat out much of the second half. The Jayhawks (2-0) were again without coach Bill Self, who served the second game of a four-game suspension imposed by the university.

North Dakota State (0-2) got 11 points from Grant Nelson and 10 from Boden Skunberg.

Kalkbrenner, the reigning Big East Defensive Player of the Year, made 10 of 11 shots from the floor and all four attempts from the free-throw line. Trey Alexander sank four 3-pointers to highlight his 14-point performance for Creighton (2-0).

Texas (2-0) was up by 27 points at the half and then really turned it on, leading by as many 59 points late in the game despite going just 3 of 22 from beyond the arc for the game.

Tristan Moore led Houston Christian (0-2) with eight points. The Huskies shot only 21.7 percent from the floor.

Kevin Obanor and Jaylon Tyson scored 13 points apiece to help the Red Raiders earn an easy victory over the Tigers in Lubbock, Texas.

Zytarious Morlte had 12 points and three steals and Davon Barnes added 10 points for Texas Southern (0-2). The Tigers played without PJ Henry (undisclosed injury), who scored 21 points on Monday in a loss at San Francisco.