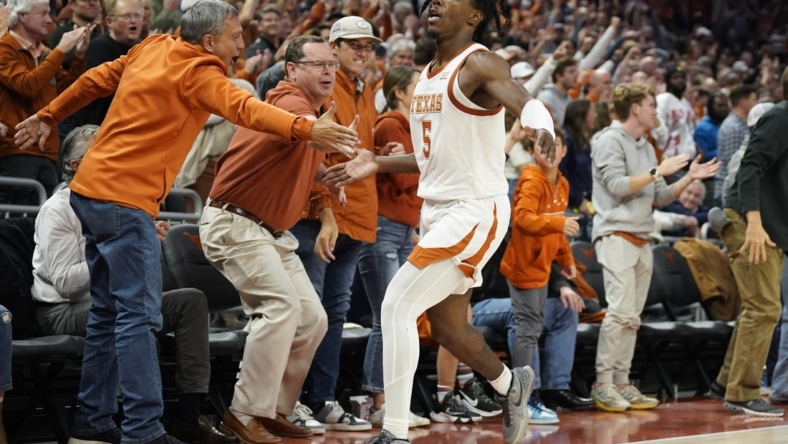 Tyrese Hunter scored a game-high 26 points Wednesday night and No. 11 Texas connected on 13 3-pointers in a 93-74 blowout of No. 2 Gonzaga in Austin, Texas.

Texas canned 51.5 percent of its field-goal attempts, including 39.4 percent from 3-point range.

Drew Timme scored 18 points and grabbed nine rebounds for the Bulldogs (2-1) but also committed five of their 20 turnovers. Gonzaga shot 49 percent from the field, including 9 of 19 on 3-point attempts, but experienced trouble with the Longhorns’ pressure defense most of the night.

Marcus Sasser scored 20 points and Jarace Walker added 19 as the Cougars cruised past the visiting Tigers in the finale of the Cougar Classic.

Sasser, a senior and preseason All-American, shot 6 of 13 from the field but missed all six of his 3-point attempts. He also had six assists and five rebounds. Walker, a freshman who arrived as a five-star recruit, shot 9 of 11 from the field and added a team-high six rebounds.

J’Wan Roberts had 10 points and four rebounds, while Jamal Shead chipped in eight points and six assists for the Cougars (4-0), who led the Tigers (1-4) by as many as 38 points in the second half.

Ricky Council IV scored 19 points on 8-of-12 shooting to lead the Razorbacks past the Jackrabbits in nonconference play at Fayetteville, Ark.

Jett Howard scored 17 points and the Wolverines rode a big second half to top the Panthers in the Legends Classic in New York. Howard went 6 of 8 from the field overall, making 2 of 3 attempts from 3-point range.

Kobe Bufkin and Joey Baker each scored 14 points and Hunter Dickinson had 11 points and seven rebounds to flank Howard for Michigan (3-0). The Wolverines will oppose Arizona State on Thursday in the tournament final.

Josiah-Jordan James and Olivier Nkamhoua each scored a game-high 18 points to lead the Volunteers to a victory over the Eagles in Knoxville, Tenn.

James shot 5-for-8 from the field, including 4-for-6 from beyond the arc, and added six rebounds. Nkamhoua went 5-for-7, including making his lone 3-point attempt for Tennessee (2-1), which rebounded from a 78-66 loss to Colorado on Sunday.

Florida Gulf Coast (2-2) was led by Zach Anderson, who had 11 points and five rebounds, while Dahmir Bishop added nine points.