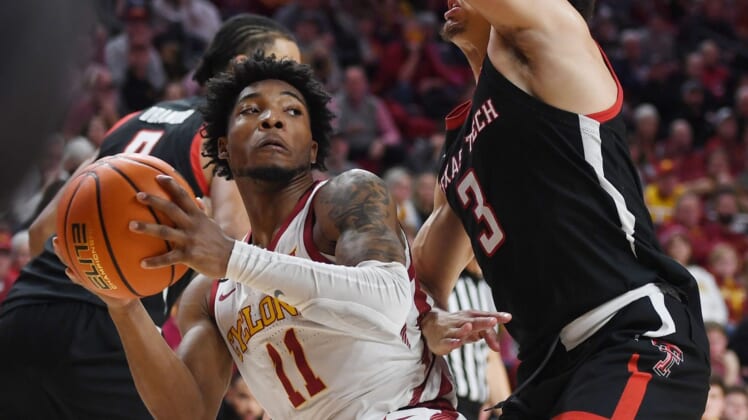 Because of injuries and COVID concerns, the Red Raiders suited up just seven players against the Cyclones but still found a way to throw a major scare into the home team before Iowa State scratched out its long-anticipated Big 12 victory.

Freshman Max Christie scored a season-high 21 points and the Spartans extended their winning streak to eight games with a victory over the visiting Cornhuskers in East Lansing, Mich.

Josh Carlton scored a career-high 30 points to lead the Cougars to a road victory over the Bulls in an American Athletic Conference clash in Tampa, Fla.

The graduate transfer from Connecticut also grabbed 11 rebounds for his first double-double of the season and the ninth of his collegiate career.

Carlton had 18 of his points in the first half and then scored 10 in the first five minutes of the second to help the Cougars (13-2, 2-0 AAC) quickly expand a three-point halftime lead into a 14-point advantage. They led the Bulls (5-8, 0-1) by double digits the rest of the way with their biggest lead coming at 69-50.

Juwan Gary and Jahvon Quinerly each finished with 19 points to lead the Crimson Tide to a road victory over the Gators in Gainesville, Fla.

All five starters scored in double figures for the Crimson Tide (11-3, 2-0 SEC), who picked up their first road conference win of the season. Gary led Alabama on the glass with eight rebounds while Quinerly conducted the Crimson Tide’s offensive attack with five assists.

The Gators (9-4, 0-1) dropped their conference opener in what was their first game in two weeks after dealing with COVID-19 issues.

Santiago Vescovi scored 15 of his 17 points in the second half and overtime as the Volunteers rallied to beat the visiting Rebels in Knoxville, Tenn.

Down 48-41 with 3:54 remaining in regulation, Tennessee saw Vescovi gain a four-point play and a 3-pointer to help force overtime. In the extra session, he made another 3-pointer and two free throws, and Olivier Nkamhoua scored five as the Volunteers (10-3, 1-1 SEC) notched their first conference win and improved to 8-0 at home despite leading just 3:16 of the contest.

Justin Moore scored 22 points to lift the Wildcats past the visiting Bluejays.

Jermaine Samuels added 18, Collin Gillespie contributed 11 and Brandon Slater had 10 for the Wildcats (10-4, 3-1 Big East), who won their third in a row. The win was the 500th for head coach Jay Wright, who is in his 21st season at Villanova.

Alex O’Connell led Creighton (10-4, 2-1) with 13 points. No one else reached double figures. Creighton shot just 3 of 24 from 3-point territory. The Bluejays, who defeated Villanova 79-59 on Dec. 17, had their two-game winning streak snapped.