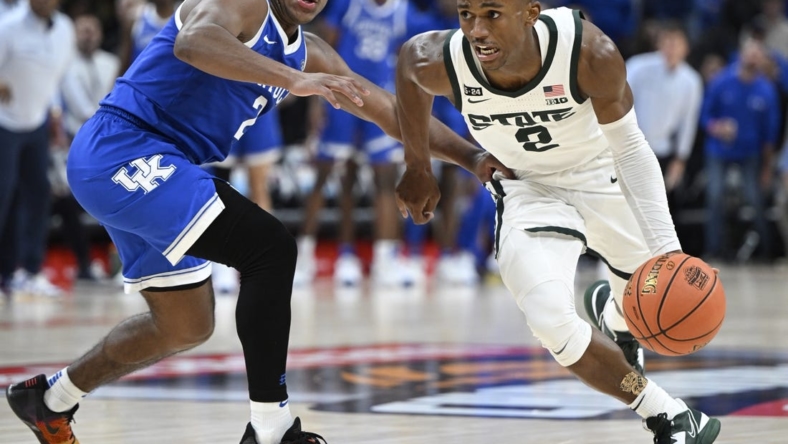 Mady Sissoko scored five consecutive points in the second overtime to help Michigan State pull out an 86-77 victory against No. 4 Kentucky in the State Farm Champions Classic on Tuesday night in Indianapolis.

Oscar Tshiebwe made an impact in his season debut for Kentucky, scoring 22 points and grabbing 18 rebounds before fouling out. Time and time again, the Wildcats leaned on their All-American to carry the load. Tshiebwe missed the team’s first two games due to a knee injury.

Caleb Love pumped in 17 of his 20 points in the second half and Pete Nance scored 18 points, but the Tar Heels needed a late burst to hold off the Runnin’ Bulldogs in Chapel Hill, N.C.

Anthony Selden scored 21 points, Julien Soumaoro had 17 points and Kareem Reid finished with 10 before fouling out for Gardner-Webb (0-3), which was taking on a No. 1 team for the first time in program history.

Jalen Wilson scored 25 points and grabbed 11 rebounds and Gradey Dick hit three consecutive baskets down the stretch to lead the Wildcats past the Blue Devils in the nightcap of the Champions Classic in Indianapolis.

Wilson, who also dished out five assists, clinched the outcome by making both ends of a one-and-one with 9.2 seconds remaining. Dick finished with 14 points, and Texas Tech transfer Kevin McCullar Jr. added 12 for Kansas (3-0).

Freshman Kyle Filipowski finished with 17 points and a game-high 14 rebounds for Duke (2-1), but he made just 6 of 18 shots, including 1 of 6 from 3-point range. Jeremy Roach added 16 points while playing the full 40 minutes, but he hit only 6 of 17 field-goal attempts.

Behind a swarming defense and a double-double from Johni Broome, the Tigers rolled to a win over the visiting Eagles.

Broome, who played the previous two seasons at Morehead State, led Auburn (3-0) in scoring (18 points), rebounds (13) and blocked shots (five) in earning his first double-double as a member of the Tigers.

A 26-9 run to start the second half gave Auburn an insurmountable 65-35 lead with less than 13 minutes to go in the game. Kelton Talford 16 points and 14 rebounds for Winthrop (2-2). Cory Hightower, the team’s second-leading scorer entering the game, was held scoreless on 0-for-5 shooting.

Jaedon LeDee scored 14 points while Lamont Butler and Keshad Johnson added 11 apiece as the Aztecs led wire to wire in a win over the host Cardinal.

Stanford pulled within 54-48 when Max Murrell’s 3-pointer capped a 10-2 run with 10:10 left in the second half. The Aztecs quickly regained control with a 16-6 run and held on for their first win over Stanford in five meetings.

True freshmen Brandon Miller and Noah Clowney combined to post 27 points and 23 rebounds, leading the Crimson Tide past the Jaguars in Mobile, Ala.

The Crimson Tide (3-0) never trailed in the game as Miller scored a team-high 19 points. Clowney added a game-high 15 rebounds. South Alabama (1-2) was led by Isaiah Moore, who had a game-high 20 points.

EJ Harkless scored a game-high 24 points and Keshon Gilbert added 16 as the Rebels rallied from a 12-point deficit early in the second half to upset the Flyers in Las Vegas.

The Flyers clearly missed their projected starting point guard, Malachi Smith, out for the third straight game with an injured right foot. Dayton was led by Kobe Elvis, who had 16 points and seven rebounds, while Mike Sharavjamts finished with 14 points.

Dayton (2-1) committed 23 turnovers and compiled just seven assists. UNLV (3-0) has used defense as its calling card, forcing a total of 76 turnovers in its three victories.

Tristen Newton totaled 22 points, 11 assists and 10 rebounds as the Huskies started slowly but gradually pulled away for an easy victory over the Bulls in Hartford, Conn.

Newton recorded the 12th triple-double in school history. It was the Huskies’ first triple-double since Daniel Hamilton totaled 11 points, 11 rebounds and 11 assists against Central Connecticut State on Dec. 23, 2015.

A transfer from East Carolina, Newton made 4 of 14 field-goal attempts but hit 14 of 17 free throws to go along with four steals in 36 minutes. Joey Calcaterra added 15 points for the Huskies (3-0). Armoni Foster and Kidtrell scored 11 points apiece for the Bulls (1-2).