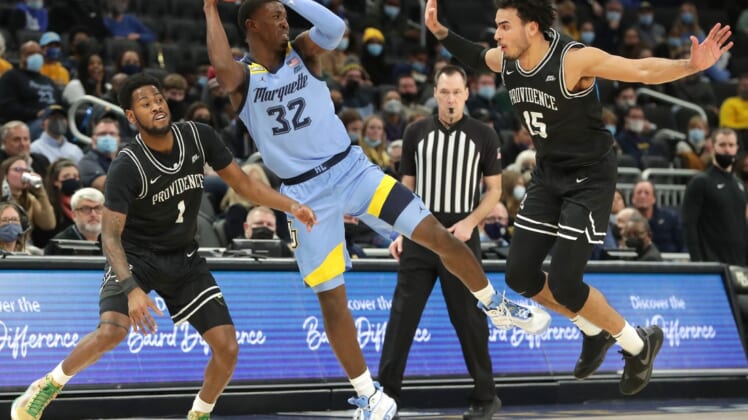 Smart coached Marquette (9-6, 1-3 Big East) to an 8-2 start, but the Golden Eagles had dropped their last four games, with three of those losses coming to start conference action.

Justin Lewis finished with a career-high 23 points on 7-of-16 shooting and added 11 rebounds to lead Marquette to its first home win since Nov. 30 against Jackson State. Oso Ighodaro had 16 points off the bench, reserve Kam Jones contributed 14 and Kur Kuath had nine to go with a career-high seven blocks.

The Golden Eagles led for the entire game and shot 52.5 percent (31 of 59), their second-highest percentage this season.

The Bears held off the determined Sooners in a Big 12 Conference dogfight in Waco, Texas.

The Bears (14-0, 2-0 Big 12) led by nine points at halftime but by only five after an Oklahoma surge over the first five minutes of the second half. Baylor counterpunched to win its nation-best 20th consecutive game.

James Akinjo scored 27 points, tying his career high, and Adam Flagler tallied 22 points for the Bears. Tanner Groves scored 13 for the Sooners (11-3, 1-1), who had a four-game winning streak snapped.

Duke (12-1, 2-0 Atlantic Coast Conference) won its fifth straight game, but the Blue Devils hadn’t played since Dec. 22 because they entered a COVID-related pause. They shot 37.3 percent, but that was better than Georgia Tech’s 32.8 percent.

Reserve AJ Griffin posted 12 points and Mark Williams had 10 points and 14 rebounds for Duke, while Michael Devoe racked up 21 points for Georgia Tech (6-7, 0-3). The Yellow Jackets lost for the second time in three nights after coming off a nearly two-week COVID pause.

David McCormack came off the bench to collect 17 points and a career-high 15 rebounds as the Jayhawks overcame a lengthy scoring drought to beat the Cowboys in Stillwater, Okla., in the Big 12 opener for each team.

Ochai Agbaji netted 16 points, Christian Braun added 15 and Jalen Wilson grabbed 15 boards as the Jayhawks (12-1, 1-0 Big 12) won their eighth straight and ran their string of wins in conference openers to 31.

Wendell Green Jr.’s season-high 22 points sparked the Tigers to a victory over the host Gamecocks in Columbia, S.C.

Erik Stevenson turned in a strong outing with a game-high 25 points, five rebounds and four assists, but South Carolina (9-4, 0-1) dropped its SEC opener and lost for the first time at home.

Marcus Carr scored a team-high 19 points and was one of four in double figures as the Longhorns overcame a sluggish start to defeat a depleted Wildcats squad in Manhattan, Kan.

Kansas State (8-5, 0-2) was led by Nijel Pack’s 21 points. The Wildcats also had to play without three starters and coach Bruce Weber because of COVID protocols.

Tari Eason scored 13 points and the Tigers used a 20-2 second-half run to take the lead for good against the Wildcats in a victory in Baton Rouge, La.

The second-half blitz gave LSU a 61-52 lead with 2:36 left, but Kentucky pulled within one point with 27 seconds left and stole the ball. But Pinson stole it back, fed Eason for a dunk and made another steal and dunked to complete the scoring.

Isaiah Stevens scored 15 points and the Rams remained unbeaten following a lengthy layoff with a victory over the visiting Falcons in Fort Collins, Colo.

Playing their first game since Dec. 11, when they rallied to beat Mississippi State, the Rams (11-0, 1-0 Mountain West) remained one of three unbeaten teams in the nation — along with top-ranked Baylor and No. 7 USC.

Stevens shot 5 of 14 and missed 4 of 5 3-point shots as Colorado State won despite shooting 40.4 percent — 30.4 percent (7-of-23) from 3-point range — against Air Force’s zone defense. David Roddy, the Mountain West’s leading scorer, notched a double-double with 13 points and 12 rebounds.

Jared Rhoden scored 17 points, and Alexis Yetna had 14 points and 10 rebounds as the Pirates snapped a two-game losing streak by defeating the Bulldogs in Indianapolis.

Seton Hall (10-3, 1-2 Big East) was buoyed by the return of 7-foot-2 Ike Obiagu, who scored eight first-half points and finished with two blocked shots. Obiagu, who had missed the previous two games because of COVID-19 protocols, altered numerous shots by the Bulldogs (8-5, 1-1).

Bryce Golden scored 19 points and Bryce Nze added 12 for the Bulldogs. Leading scorer Chuck Harris went 0-for-5 from the field and was held scoreless.