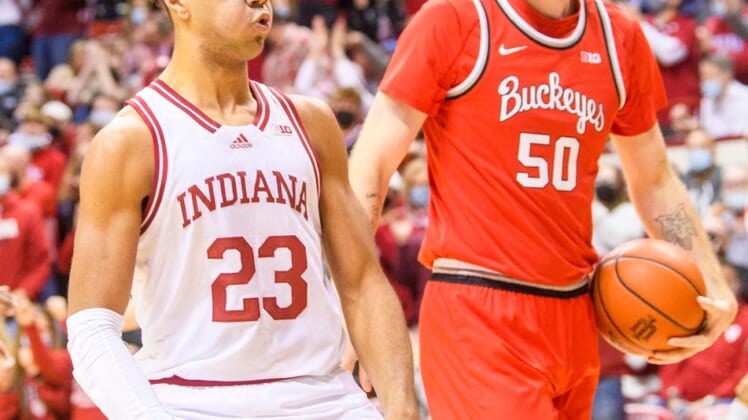 Trayce Jackson-Davis had 27 points, 12 rebounds and five blocks to lead Indiana to a 67-51 victory over No. 13 Ohio State on Thursday night in Bloomington, Ind.

Race Thompson added 11 points and Trey Galloway scored eight off the bench for the Hoosiers (11-3, 2-2 Big Ten), who improved to 10-0 at home with their first win over a ranked team. Jackson-Davis posted his fifth double-double of the season.

After Branham hit a pair of free throws to cut Indiana’s lead to 46-45, the Hoosiers broke the game open with a 19-3 run, which included a combined 12 points inside from Jackson-Davis and Thompson.

Jules Bernard matched his season high of 22 points and the Bruins ended a 26-day stretch between games with an easy win over the Beach in nonconference play in Los Angeles.

Johnny Juzang added 18 points and Tyger Campbell recorded 11 points and a season-best 10 assists as the Bruins (9-1) took the floor for the first time since beating Marquette on Dec. 11. UCLA was sidelined due to a COVID-19 pause that saw coach Mick Cronin and all but three players test positive.

Jadon Jones scored a career-best 27 points for Long Beach State (4-8), which played its second contest in two nights after going 23 days between games. Long Beach State was rounded up as UCLA’s opponent after Arizona State pulled out of Wednesday’s game with the Bruins due to its COVID-19 issues.

Isaiah Mobley scored 19 points and the seventh-ranked Trojans showed no rust after a 19-day layoff in beating the host Golden Bears in a Pac-12 Conference matchup in Berkeley, Calif.

Johnny Davis scored 26 points to lead the Badgers to victory over the visiting Hawkeyes in a matchup featuring two of the nation’s top scorers in Madison, Wis.

Davis, who entered third in scoring in Division I at 22.3 points per game, hit 10 of 18 shots, pulled down nine rebounds and had five assists for the Badgers (12-2, 3-1 Big Ten). Brad Davison had 18 points and Tyler Wahl added 16 points and nine rebounds as Wisconsin held a 43-26 advantage on the boards.