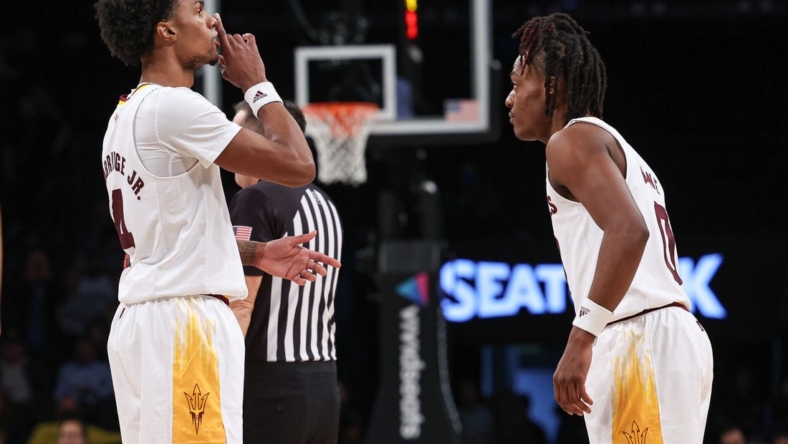 Hunter Dickinson led Michigan (3-1) with 14 points, while Jett Howard added 12. The Wolverines made 33.9 percent of their shots from the field, including 4 of 22 (18.2 percent) from beyond the arc.

CJ Fredrick led five Wildcats players in double-figures scoring with 17 points in the rout of the Bulldogs in Lexington, Ky.

Rakeim Gary had 13 points and Shaman Alston put up 10 for the Bulldogs (0-4), who were playing the fourth of 11 consecutive road games to open the season.

Baylor Scheierman scored a game-high 17 points to lead four Bluejays in double figures as they cruised past the Highlanders in Omaha, Neb.

Kerr Kriisa scored a career-high 24 points and all five starters finished in double figures as the Wildcats continued their hot start to the season by walloping the Trailblazers in Tucson, Ariz.

The Wildcats (3-0) shot 63.6 percent from the field and set a school record for most free-throw attempts without a miss, going 22 of 22. Arizona is averaging 105.3 points through three games.

Azuolas Tubelis had 20 points on 9-of-11 shooting, to go with eight rebounds and five assists. Oumar Ballo recorded 16 points and 11 rebounds for the Wildcats. Utah Tech (1-3) was led by Noa Gonsalves, who scored 13 points.

Emanuel Miller poured in 16 points and JaKobe Coles added a career-high 15 as the short-handed Horned Frogs rolled over the Warhawks in Fort Worth, Texas.

The Horned Frogs (3-1) bounced back from a home loss to Northwestern State on Monday via a dominating first half. They shot 53.1 percent from the floor and made 10 of their 20 shots from beyond the arc.

The Warhawks (2-2) were led by Tyreke Locure’s 14 points, while Nika Metskhvarishvili and Jamari Blackmon had nine each.

JaCobi Wood hit four shots from 3-point range on the way to 23 points as the Racers knocked off the Aggies on the opening day of the Myrtle Beach Invitational in Conway, S.C.

Kenny White Jr.’s 18 points and Jamari Smith’s 17 points were also crucial for Murray State, which used only seven players. Rob Perry added 12 points. Wood, who had four assists, was 9 for 9 on free throws.

Murray State (2-1) will meet UMass, a 66-63 winner against Colorado in Thursday’s first game, in a semifinal Friday. Texas A&M (2-1) takes on Colorado in the consolation bracket. Tyrece Radford’s 19 points led the Aggies, while Wade Taylor IV had 16 points.