With the 2018 U.S. Open right around the corner, it’s the perfect time to look at the field and see who has the best chance to win at Shinnecock Hills.

Obviously, we’ve all got our preferences and our dark horse picks. But these are the guys the odds makers are telling us to look at.

Predictably, each of the last three U.S. Open champions are among the top-10 favorites. But what do the odds tell us about comeback kid, Tiger Woods? Going for the career grand slam in a part of the country where he’s always been very popular certainly isn’t hurting the odds of Phil Mickelson.

Note: All odds courtesy of Bovada.

While Oosthuizen hasn’t won anything since 2016, he’s notched nine worldwide top-10 finishes since 2017 began. This includes a T-5 at the Forth Worth Invitational. Most recently, Oosthuizen posted a T-13 at the Memorial. So, he’s playing well. Also, while he didn’t play in the last U.S. Open at Shinnecock Hills, Oosthuizen has a major (the 2010 Open Championship) and has finished second at all four majors. So, his game is fairly adaptable to different styles of courses.

Cantlay really broke out in 2017. While 2018 hasn’t gone quite as well for Cantlay, he does have two top-10 finishes since the Masters, including a fourth-place finish at the Memorial. This will be Cantlay’s first U.S. Open as a professional, although he did play in the 2010 and 2011 events as an amateur, making the cut both times.

While Leishman has never won a major, he’s certainly shown that he can contend. Leishman has five top-10 finishes at majors, including two of his last three. The odds definitely say that he’ll be around over the weekend. Since the beginning of 2017, Leishman has 13 top-10 finishes, five of which have come in 2018. 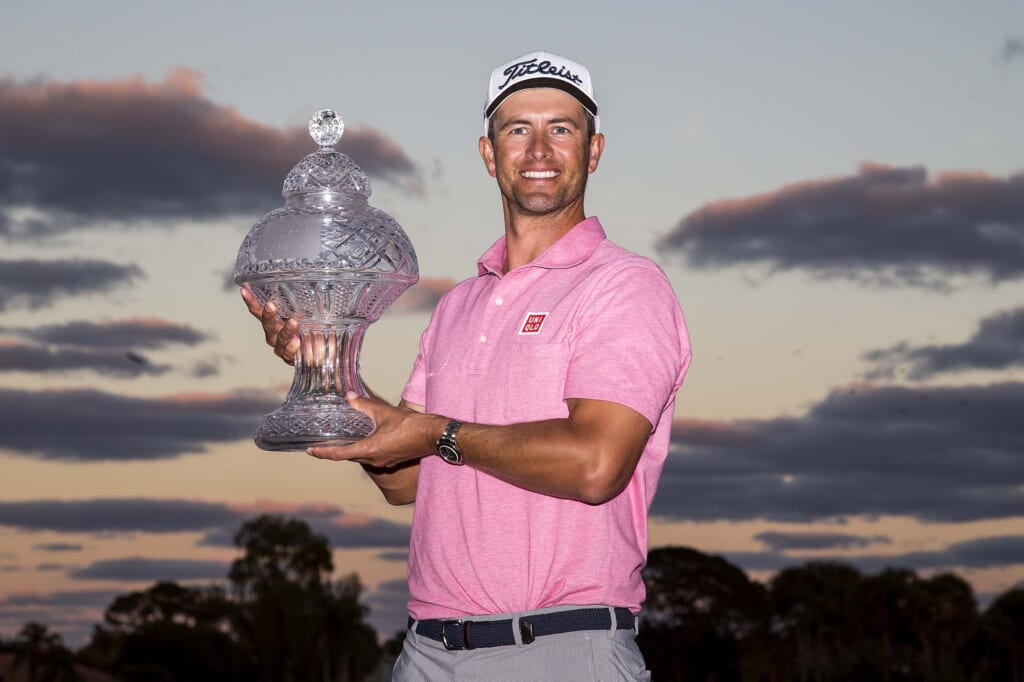 Scott needed a good showing at the sectional qualifier to even make the U.S. Open. Now that he’s in, what kind of chance does he have? Scott has five top-10 finishes over the last two years, but he hasn’t cracked a top-three since 2016. Scott is also one only a handful of golfers in the field this week who teed it up at Shinnecock Hills in 2004. Unfortunately, that resulted in a missed cut. Even still, experience at a course is never something to discount, especially when many competitors don’t have it.

There’s a lot to like about Noren. While he hasn’t won in 2018, he does have four top-three finishes. If you’re going to win, you have to contend. Noren has shown that he can do that. The problem is that Noren doesn’t have a great track record in majors. He’s notched only two top-10 finishes, both of which came at the Open Championship. At the U.S. Open, he has four missed cuts and a T-51. The odds are decent, but it feels like there are better plays.

It’s been a good year for Casey. He returned to the winner’s circle for the first time since 2014. He’s notched three additional top-10 finishes after posting a solid nine in 2017. So, we like where Casey’s game is at. Additionally, while Casey has only one top-10 finish at the U.S. Open (which came all the way back in 2007), he’s another one of the players who teed it up in 2004. There’s no telling how much course experience can help. 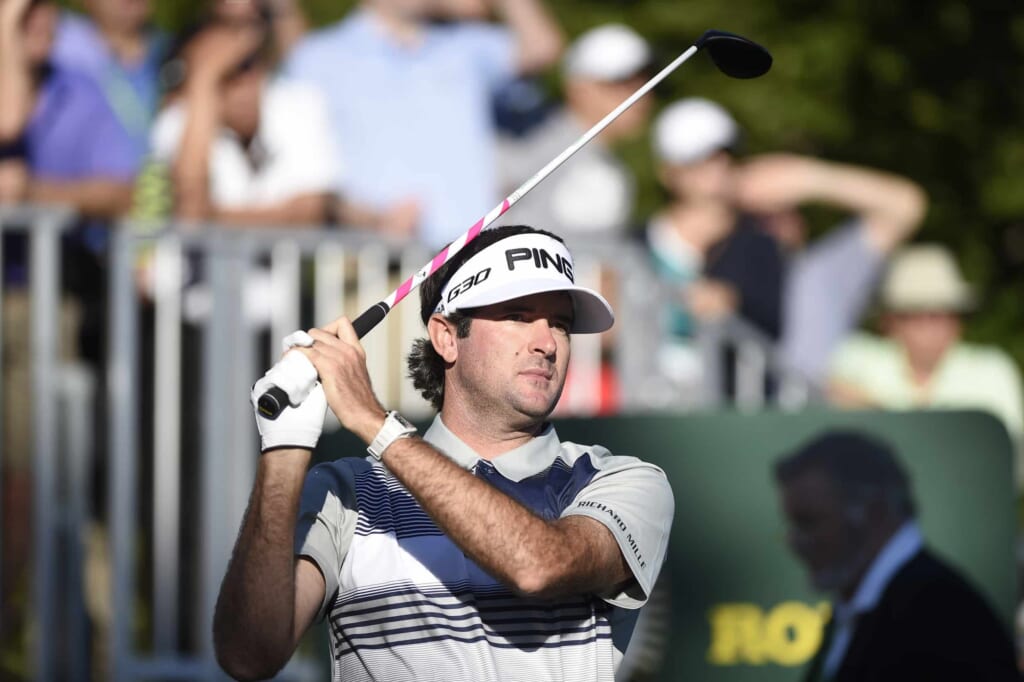 Bubba has largely enjoyed success in 2018. The two-time Masters champ has already won twice and notched two other top-10 finishes. Less encouraging is Watson’s history at his national championship. He actually made his U.S. Open debut in 2004, missing the cut. Three years later, he posted a T-5. But since, Bubba has finished in the top-20 only once and has missed five cuts. Bubba is a complete mixed bag, which is perfectly fitting for him.

While he’s yet to win in 2018, Grace has a runner-up, a third-place finish, and two other top-10s. Additionally, Grace recorded at least one win every year from 2014-2017. He’s been one of the most consistent players in the world during that stretch. Grace also has a good track record in the U.S. Open, having recorded top-five finishes in both 2015 and 2016. He hasn’t won a major but certainly knows how to contend.

A decorated amateur, DeChambeau has adjusted nicely to life on tour, winning in both 2017 and 2018. In addition to his win at the Memorial, DeChambeau has a second, a third, and two other top-10 finishes in 2018. DeChambeau finished T-15 at the U.S. Open in 2016, which was sandwiched in between a missed cut in 2015 and 2017. So, there’s not much history on these kind of courses to draw from. If you don’t mind a relative lack of major experience, DeChambeau certainly has the talent.

The list of golfers who have played as well as Fleetwood over the last two years is not a long one. Since the start of 2017, Fleetwood has 16 top-10 finishes, including three wins. The U.S. Open history is not vast, but it’s strong. Fleetwood has teed it up twice, finishing T-27 in 2015 and solo fourth in 2017. Fleetwood is obviously not the favorite here but all things considered, he might be the best bet.

The bad news with Garcia is that he’s struggled recently, missing the cut in three of his last four events. The good news is that he has four top-10 finishes over the last three years. That’s a run that includes the 2017 Masters. Garcia has never won a U.S. Open, but he’s finished in the top-10 five times. He also has a decent history at this course, having finished T-20 in 2004.

Thanks to his win at Augusta, Reed will always look back at 2018 with fondness. But even without that, he has four other top-10 finishes, including a runner-up at the Valspar Championship. Craig Wood, Ben Hogan, Arnold Palmer, Jack Nicklaus, Tiger Woods, and Jordan Spieth are the only players to win the Masters and U.S. Open in the same year. So, Reed would certainly join a great group with a win at Shinnecock.

Stenson hasn’t won in 2018. But with five top-10 finishes, he hasn’t exactly faded into oblivion. His history at the U.S. Open is something of a mixed bag. Stenson does have two top-10 finishes, but he withdrew in 2016 and missed the cut in 2017. As we learned at the 2016 Open Championship, he’s perfectly capable of going low to win a major. But his overall value comes from being one of the world’s most consistent players. 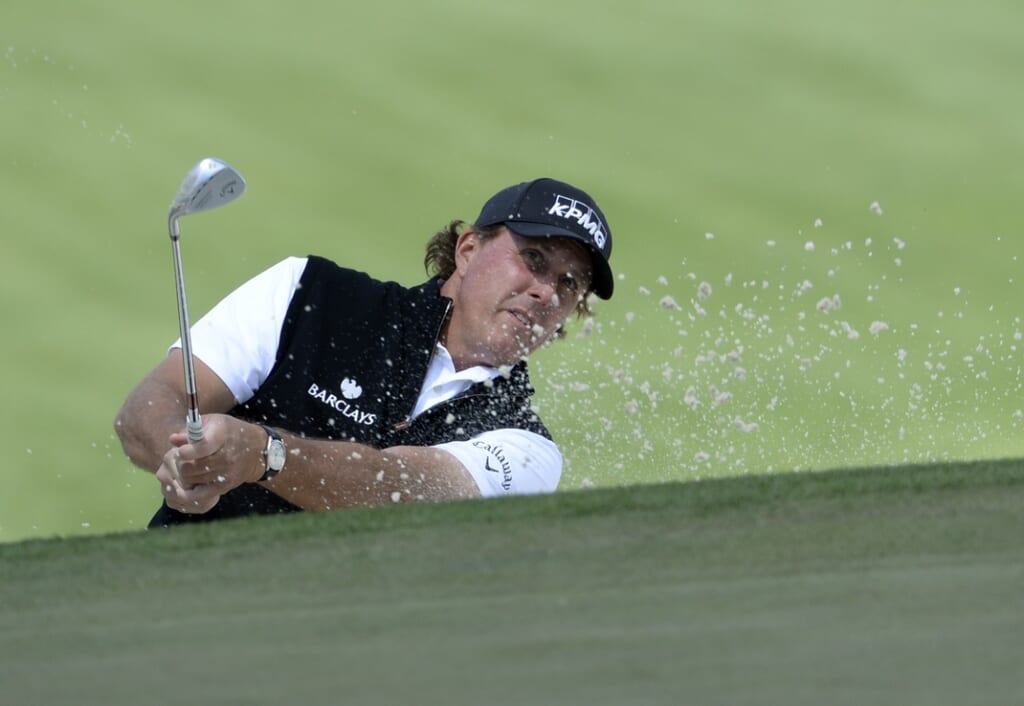 It’s been a resurgent year for Mickelson, who has five top-10 finishes. That included his first win since 2013. Mickelson’s history at the U.S. Open is well documented. He’s finished second six times, but it’s the one major he’s never won. One of those second-place finishes came in 2004, when he was tied for the lead entering the 17th hole on Sunday but made a double bogey. Finally, while Mickelson’s a California boy, the New York fans have always treated him like one of their own. Mickelson will be the clear fan-favorite at Shinnecock.

Golfers didn’t get much hotter than Matsuyama over 2016 and 2017. He won seven times and posted 20 top-10 finishes. With only one top-10, things have cooled a bit in 2018. Even still, he’s missed only one cut. So, Matsuyama is still competing well. Matsuyama has teed it up five times at the U.S. Open and finished in the top-10 twice, including a T-2 in 2017. Even if he’s not as hot as he was in 2017, the track record is certainly strong.

Koepka has dealt with injuries in 2018, having only teed it up four times. That said, he’s trending in the right direction, finishing T-11 and second in his last two events. In addition to that and his obvious good history at the U.S. Open, Kopeka has made the cut in 22 straight events, dating back to early 2017. Should Koepka win, he’d be the first man to win consecutive U.S. Opens since Curtis Strange in 1988 and 1989.

Nobody will ever question Rahm’s talent. He has 19 top-10 finishes — including five wins — over the last two years. Rahm has limited history at the U.S. Open, however. He finished T-23 as the low amateur in 2016 then missed the cut in his first U.S. Open as a pro in 2017. Rahm’s issue has always been that he tends to get very frustrated when things go south. He’ll need to keep that in check here, because that’s going to happen at a U.S. Open. If Rahm can do that, he’s one with a real chance. 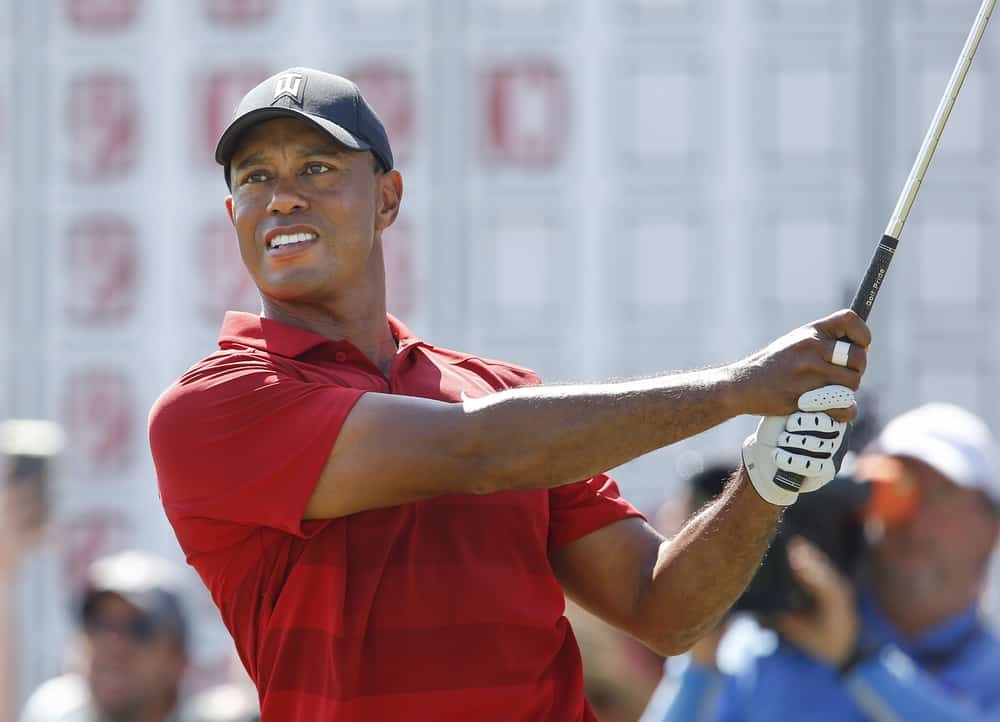 Even without a win, Woods has definitely enjoyed a great deal of success in his comeback season. Tiger’s track record speaks for itself. He hasn’t played in a U.S. Open since 2015 but is three-time champion. He also finished T-17 in 2004, so he has decent history at Shinnecock Hills. It would be a tremendous story if Tiger did win 10 years removed from his last major triumph. With that said, count him out at your own risk.

While Fowler has never won a major, he has nine top-10 finishes, including three at the U.S. Open. We’ve certainly gotten used to seeing Fowler’s name on the front page of leaderboards of all tournaments. Going back to the beginning of 2016, he has 26 top-10 finishes. The odds makers like Fowler a lot. He’s got the best odds of anyone who’s never won a major.

In 2017, Rose won three times, had three more second-place finishes, and nine other top-10s. He hasn’t quite had that magic in 2018. But with a win, a third, and three other top-10s, Rose has still been darn good. Rose missed the cut in 2004 at Shinnecock Hills, but has three top-10 finishes in the U.S. Open, including his win in 2013. We can certainly expect to see him in the mix over the weekend.

While Day hasn’t had the same kind of comeback season that Tiger has had, he’s certainly enjoying a nice revival. Day has won twice, has another second-place finish, and one more top-10. While he missed the cut at the 2017 U.S. Open, his history at this event is strong. Day has finished second at the U.S. Open twice and has three other top-10 finishes. Other than maybe Mickelson, Day’s track record at the U.S. Open is better than anyone in the field this week who’s never won it. 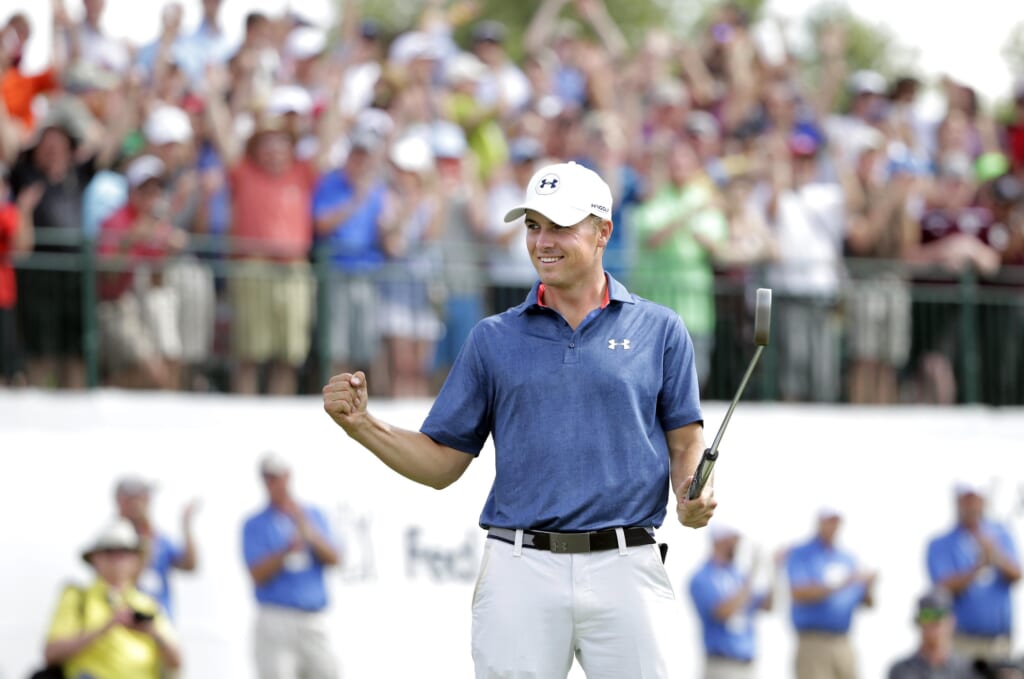 Spieth hasn’t won in 2018. For a guy who won at least one event a year every year from 2013-2017 (and at least two a year from 2014-2017), that’s notable. But he does have four top-10 finishes on the season. Spieth also has a great track record. In addition to winning the 2015 U.S. Open, he hasn’t missed a cut in any major since the 2014 PGA Championship. Even without a win this year, it’s hard to argue with Spieth’s status as one of the clear favorites heading into Shinnecock.

Much like the aforementioned Day, McIlroy is enjoying a revival season. He’s got a win, two second place finishes, and three other top-10s this season. McIlroy won the 2011 U.S. Open in record fashion. His record since then hasn’t been stellar, but he did finish T-9 in 2015. If McIlroy’s game is on point at Shinnecock, the list of potential contenders will shrink. Very few golfers can hang with McIlroy when he’s firing on all cylinders.

Johnson has only won once in 2018 (a stark contrast to seven wins over 2016 and 2017), but he hasn’t fallen off of the map. The former No. 1 in the world has a second-place finish and four other top-10s. DJ also has a great track record at the U.S. Open. In addition to winning in 2016, Johnson has a second place finish and two other top-10s at his national championship. While Johnson has lost the No. 1 ranking in the world, it’s hard to argue with him being the favorite.