Suamataia was regarded as the Ducks’ top recruit for 2021, but he appeared in just one game. Suimataia played only 11 snaps against FCS program Stony Brook.

A five-star prospect and the No. 32 overall recruit in 247Sports rankings for 2021, the 6-foot-6 Utah native is now free to be contacted by any schools interested in signing him. BYU is expected to be a strong candidate in the pursuit of the tackle, per 247Sports. 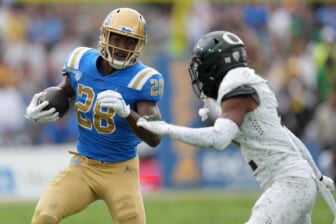 As a first-time entrant in the transfer portal, Suamataia would be eligible to play immediately for a new team next season.

The No. 7 Ducks (6-1) currently have senior George Moore starting at left tackle.