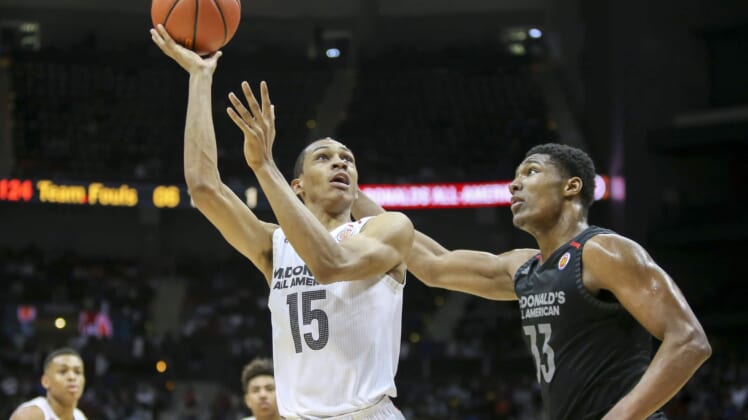 In a decision that could cause somewhat of an uproar, top 2019 NBA Draft prospect Darius Bazley has decided to skip college and head straight to the G League instead.

Bazley, who is projected as a top-10 pick in the 2019 NBA Draft, shared this decision, and the reasoning behind it, with Shams Charania of The Vertical.

“This is a life-changing decision,” Bazley, one of the top players in the Class of 2018, told Yahoo Sports. “I put a lot of thinking into this with my mom and close circle, especially sitting down with her. It’s just like making the decision to which college you want to go to. Me and her did some talking, and I prayed on it. I talked to my high school coach, Steve, who played overseas, and then I talked to a couple of guys in the G League who have experience. Ultimately, playing professional basketball has always been my dream. It’s always going to be the dream goal, always going to be the goal until I achieve it. This is going to put me one step closer to doing so.”

Many players who have previously opted not to attend college have instead gone overseas, much like what we’re now witnessing with the two Ball brothers in Lithuania. Bazley explained why he chose the G League, rather than going overseas.

“The G League will have the most to offer, considering that is the development league for the NBA,” he continued. “I will get more out of that than going overseas. The G League is the closest thing to the NBA. I see most guys now are spending time in the G League even after they went to school and the draft, so this gives me the chance to accelerate the process. There have been a lot of successful guys who have been brought up in the G League, and I’m confident that I will be one of them.

Previously, Bazley had committed to Syracuse. Obviously, that’s not going to happen now.

Now he’ll be looking to sign with one of the NBA affiliates this summer after he turns 18 this July. We can’t wait to see the results of this experiment and wish the young man well in his endeavor.