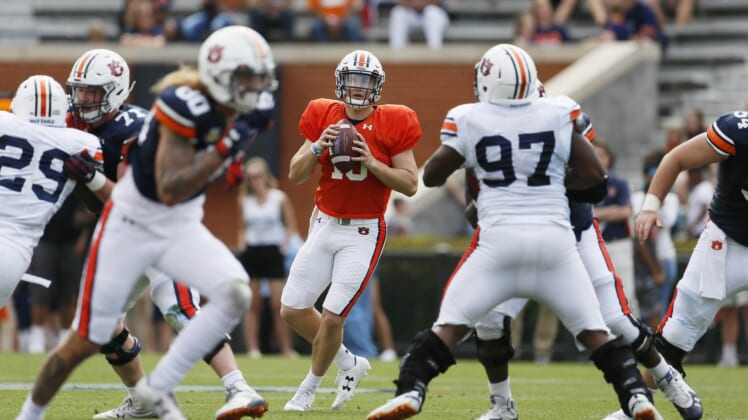 Are you excited that college football is finally back? We’re doing cartwheels ahead of Week 1, which features games from Thursday to Monday. That’s five straight days of Division I football, ladies and gentlemen.

There are plenty of gimme matchups for many of the nation’s top-ranked teams. Yet that doesn’t mean there isn’t anything to talk about.

These are the 10 top storylines we’re focused on ahead of college football Week 1.

The Utes come into college football Week 1 ranked No. 14 in the nation. No biggie, right? The expectations for this program are as high as they’ve been in years, thanks to dominant lines on both sides of the ball and an offense that returns key playmakers like quarterback Tyler Huntley and running back Zack Moss.

Thursday night’s Holy War in Provo couldn’t be more critical for Utah to win. It’s the team’s toughest road game until November. It’s also being televised nationally on ESPN — showing just how much hype the program has right now. A loss to a BYU squad that doesn’t match up on paper would be extremely damaging to the program on a national level.

A transition year in Alabama

Given the success Nick Saban has had at Alabama, it may seem trivial to wonder how the team will perform in a game against a Duke program that has no business being on the same field as the Crimson Tide.

Still, the metamorphosis this program’s coaching staff went through after losing to Clemson in the National Championship Game wasn’t insignificant. Furthermore, key starters left for the NFL, and the Tide are featuring some extremely young talent at critical positions.

Probably, Saban’s squad will have this game put away by halftime. Then again, that’s what we thought last year when The Citadel came to town.

Supposedly, the Wolverines won’t be a three-yards-and-a-cloud-of-dust team anymore on offense. Jim Harbaugh hired former Alabama coach Josh Gattis to coordinate the offense, which is said to be a shotgun spread look. It’s a far cry from the power football Harbaugh is known for.

Saturday’s matchup against Middle Tennessee State shouldn’t be anything more than a glorified practice session for the Wolverines. Yet it will be the first chance most of us will get to see what Shea Patterson and Co. can do in this new offense.

Remember a year ago when Florida State was supposed to take off in Willie Taggart’s first year at the helm? The Seminoles were the No. 19-ranked team entering Week 1 and promptly got embarrassed by Virginia Tech. It was a portend of a doomed campaign, which the university has since blamed on Jimbo Fisher.

Now, in Taggart’s second year, the program has another early test as the always-tough Boise State Broncos will travel to Jacksonville for a Saturday evening clash. Florida State is favored to win by just under a touchdown, yet after last year a loss won’t feel too out of place. Win or lose, this game will set expectations for the Seminoles, and for the FSU fan base.

Can the Yellow Jackets catch Clemson by surprise?

Death Valley is going to be rocking for this rare Thursday night Clemson opener against Georgia Tech. The Tigers are justifiably the No. 1 team in the preseason rankings after winning it all in 2018. Quarterback Trevor Lawrence is a Heisman favorite, and his offensive weapons are out-of-this-world good.

The one reason to wonder about how things will play out is that Georgia Tech won’t look like Georgia Tech offensively — having ditched the triple-option for a modernized approach. This new-look offense has been kept under wraps all summer long, and Clemson really has no idea what to expect. Throw in the fact that the Tigers lost a bunch of key defensive starters to the NFL and this becomes an interesting dynamic.

Return of the Mack

Mack Brown is back at the University of North Carolina for the first time since 1997. He hasn’t coached in a college football game since the 2013 season, after which he announced his resignation as head coach of the Texas Longhorns. So, we honestly have no idea what to expect from the Tar Heels this year.

North Carolina’s first game of the season isn’t a cakewalk, either. They’ll host Will Muschamp’s South Carolina Gamecocks, who are desperate to rebound from a poor 7-6 campaign a year ago. Saturday’s matchup will set a tone for both programs.

Coming off an overachieving 2018 campaign that saw the Wildcats win the Big Ten West over Iowa and Wisconsin, Northwestern has a chance to potentially be more formidable in 2019. Of course, that depends on former Clemson quarterback Hunter Johnson — the former five-star recruit out of Brownsburg, Indiana.

This dual-threat passer has a chance to far exceed what Clayton Thorson did as the leader of Northwestern’s offense. And we know head coach Pat Fitzgerald is going to dial up a game plan that suits his young quarterback’s skills to a T. However, Johnson’s first test is a big one — a road game against No. 25 Stanford.

It’s a huge game for both programs. If Johnson gets off to a hot start against a tough-as-nails Cardinal defense, it could lead to an upset for the road team.

Clash of the titans in Arlington

There is a lot at stake when the Auburn Tigers (No. 16) and Oregon Ducks (No. 11) square off at AT&T Stadium in Arlington Saturday evening on ABC. The obvious consequence of these highly-ranked teams going head-to-head in Week 1 is that the winner will get a nice early boost in the rankings, while the loser will tumble down.

There’s plenty more going on here, however. First off, Gus Malzahn needs a win in the worst way. He enters the season firmly on the hot seat and needs to have a big season to retain his job. On top of that, he is relying on a freshman quarterback, Bo Nix, to lead him to the promised land.

On the other side, Oregon has a loaded overall roster, but the one player everyone’s tuning in to see is senior quarterback Justin Herbert. He was slated to be a top-10 NFL draft pick last year before opting to return to school. Supremely talented, he makes incredibly difficult throws look routine.

Is Clay Helton all but gone?

USC is coming off an extremely disappointing 2018 season that saw the Trojans go 5-7, missing a bowl game in a non-sanctioned season for the first time since 1999. Head coach Clay Helton’s seat is so hot it’s flaming. A loss in Week 1 will be akin to throwing jet fuel on the blaze.

This weekend’s game won’t be easy, either. Fresno State is coming to Los Angeles, and the Bulldogs lost just two games a year ago as they won the Mountain West. If quarterback JT Daniels gets off to a slow start against the tough Bulldogs defense, the boo birds could come out early at the Coliseum.

With the NFL getting its final preseason games out of the way on Thursday, Sunday night belongs to Houston and Oklahoma, who’ll battle it out in Norman on ABC. The Sooners are by far the superior team overall. Yet by virtue of D’Eriq King alone, the Cougars may have a chance to challenge their opponent for 60 minutes.

Before suffering a season-ending knee injury in his 11th game last year, King had put up 50 total touchdowns and 3,668 yards from scrimmage. Only Kyler Murray and Dwayne Haskins had more touchdowns than King, and both were Heisman finalists, with Murray winning the Trophy.

On the other side, electric dual-threat Alabama transfer Jalen Hurts is taking over Lincoln Riley’s offense. He has a chance to be the third Sooners quarterback to win the Heisman in as many years.

Needless to say, this game should feature a ton of big plays from both teams. Get your popcorn ready.