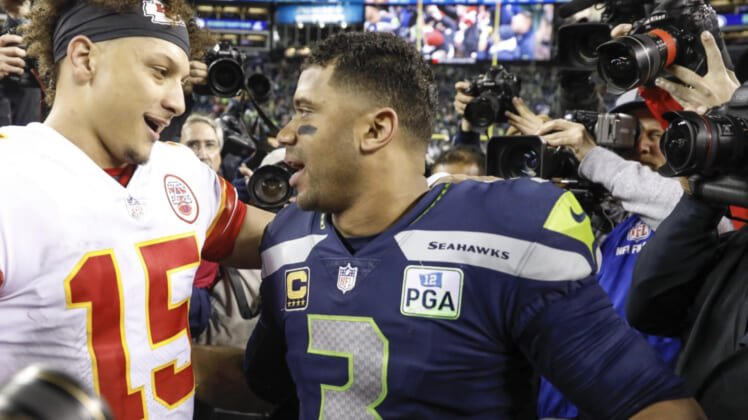 We might be at the golden age of quarterback play around the NFL. Patrick Mahomes is setting records in Kansas City. Tom Brady continues to be Tom Brady.

Meanwhile, newly-minted elite quarterbacks such as Lamar Jackson and Dak Prescott have gotten off to ridiculous starts this season.

As we will do each each during the season, here is a look at the top-10 quarterbacks around the NFL heading into Week 3.

Otherworldly. That’s the best way to describe Mahomes’ second quarter performance against the Oakland Raiders last week. He went for nearly 300 passing yards and four touchdowns. In. 15. Minutes. That’s about one of the craziest stat lines we’ve ever seen. Mahomes has now thrown for a league-leading 821 yards to go with seven touchdowns and zero interceptions for a 136.3 quarterback rating on the season. Yeah, this kid might be good.

If it wasn’t for New England absolutely blowing out its opponents each of the first two weeks, Tom Terrific’s stat line would be much more impressive. The reality is that this team is just too good. We’re talking about a squad that has outscored its first two opponents 76-3. For his part, the ageless Brady is completing nearly 70 percent of his passes for 637 yards and five touchdowns. He’s also now thrown a total of 21 picks over his past 46 starts. GOAT, indeed.

Jackson will have an opportunity to go head-to-head with Mahomes this week in an attempt to ascend the rankings even more. Though, it’s not like the second-year quarterback already hasn’t proven himself. Jackson is tied for the lead or owns the outright lead among NFL quarterbacks in touchdowns (seven), touchdown percentage (12.3), average yards per attempt (12.9) and passer rating (145.2). Did we mention he’s tallied north of 700 total yards while heading a Ravens offense that ranks No. 1 in scoring and yards?

This fourth-year quarterback has checked all the boxes through two weeks. After struggling early against the Redskins last week, Prescott responded big time in another double-digit Cowboys victory. He completed all but two of his final 20 passes and finished the afternoon connecting on 26-of-30 attempts for 269 yards with three scores and that one pick. Prescott has now tallied nearly 700 yards with an NFL-high 82.3 completion percentage and seven touchdowns. It might be time to pay this dude before the price tag goes up even more.

After a mediocre start to the season in Week 1, Wilson and the Seahawks’ offense was clicking on all cylinders against the Steelers this past Sunday. The quarterback completed 29-of-35 passes for 300 yards with three scores and zero interceptions en route to forcing Pittsburgh to trade for Minkah Fitzpatrick. That’s not hyperbole. One day after the game, Pittsburgh made the blockbuster move with Miami. Wilson has now thrown 40 touchdowns compared to just seven picks in his past 18 starts. The dude is like fine wine, getting better with age.

Rodgers followed up a ho-hum Week 1 performance with a pretty decent outing against a good Minnesota Vikings defense this past week. That included the former MVP putting up two touchdowns in the first quarter alone. However, the Packers were blanked in the final 44-plus minutes of the game and almost blew a 21-point lead at home. Rodgers is still getting accustomed to Matt LaFleur’s offense. That’s understandable. It’s still surprising to see him rank 23rd among quarterbacks in passing yards and tied for 14th in touchdowns.

Wentz struggled big time in the first half Sunday night against the Falcons after DeSean Jackson and Alshon Jeffery were among those to go down to injury. However, the high-priced quarterback did pick it up in the second half. He put up a 115.9 passer rating and almost led an injury-depleted Eagles team to a road win. This followed a flawless three-touchdown outing against Washington in Week 1. We’re still not sold on Wentz living up to the preseason hype of being an MVP candidate. With that said, he’s looked good for all but two quarters this season.

We can’t blame Watson for the lack of pass protection in front of him. The third-year signal caller was hit the most of any quarterback (126 times) last season and sacked a league-high 62 times. Thus far this season, that split stands at 18 and 10. Despite this, Watson has still found a way to account for five touchdowns and one interception while boasting a solid 93.0 passer rating. Watson simply needs his offensive line to improve. That’s a tall task given what we’ve seen during his young career.

We’re still a bit alarmed by the two interceptions Garoppolo has thrown this season. It’s not that he’s been picked off twice. It’s bound to happen with his gunslinger mentality. Instead, it’s all about the passes themselves. That included a brutal pick-six against Tampa Bay in Week 1. Even then, Garoppolo has righted the ship in a big way and leads a 49ers offense that heads into Week 3 averaging a whopping 36 points per game during their two-game winning streak. For his part, Garoppolo is completing 67.3 percent of his passes with four touchdowns for a stellar 104.9 quarterback rating.

Five interceptions in two games isn’t going to cut it. That’s especially true given the fact that this former NFL MVP was picked off just seven times in two of the past three seasons. Though, this is not all on Ryan. Falcons players have dropped some easy passes, a couple of which have led to interceptions. We’re still concerned that regression is the name of the game for Ryan this season. He’s made some mistakes that simply have not been par for the course for one of the game’s most underrated quarterbacks. That must change moving forward.