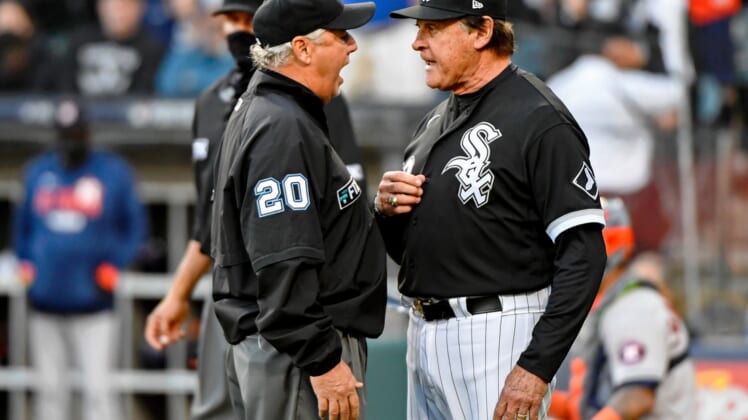 The report comes the same day that All-Star shortstop Tim Anderson threw his full-throated support behind the 77-year-old skipper.

“I want him to be back,” Anderson said Thursday. “At the end of the day, my decision doesn’t really matter. I guess it all depends on what the front office thinks. … I definitely want him in. I think he did a great job with the way he managed and just being open.”

La Russa led the White Sox to a 93-69 record and a first-place finish in the American League Central. The White Sox were eliminated in four games by the Houston Astros earlier this week in the AL Division Series.

La Russa had a tumultuous second stint in Chicago before it even started. The White Sox came under fire for hiring La Russa nearly one year ago despite DUI charges that came about in February 2020. He pleaded guilty to a lesser misdemeanor charge last December and was publicly scolded by the White Sox.

La Russa previously pleaded guilty to a DUI charge in Florida in 2007.

In May, La Russa admitted to not knowing the extra-inning rule that allowed managers to avoid using a pitcher at second base.

Also in May, he criticized his own player, Yermin Mercedes, for swinging at a 3-0 pitch with a huge lead. The criticism pitted La Russa against other players — including Anderson — in the White Sox clubhouse who came to Mercedes’ defense.

“Everybody thought we weren’t going to get along,” said Anderson. “But overall, we were talking behind the scenes the whole time. Just for him, the players come first and he makes that known. We’re one big family.”