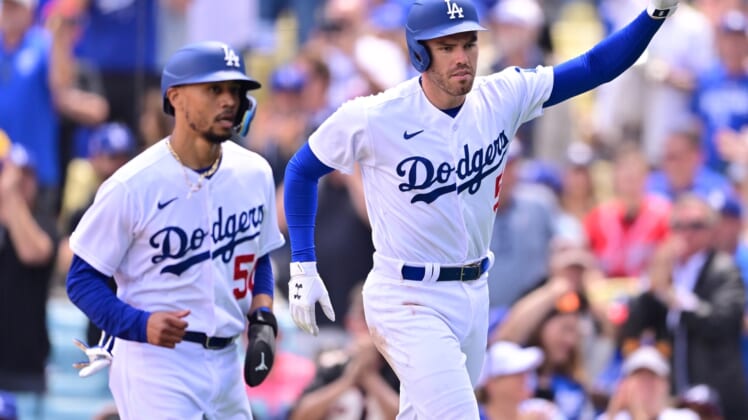 Tony Gonsolin worked six scoreless innings and Freddie Freeman hit another home run against his former team as the host Los Angeles Dodgers defeated the Atlanta Braves 5-1 on Wednesday in the rubber game of a three-game series.

The Dodgers won the series.

Gonsolin (1-0) did not allow a hit until the top of the sixth when Atlanta catcher Manny Pina legged out an infield single. That was the only hit he allowed in a season-high six innings. Gonsolin struck out three, walked three and earned his first career win against the Braves.

Gonsolin has allowed only one run in 13 innings over three starts and lowered his ERA to 0.69.

Freeman cracked a two-run homer in the first inning, his second, and has hit safely in eight of 12 games. He went 4-for-11 with two homers in the three-game series.

Freeman put the Dodgers on the board with a homer in his first at-bat, a 379-foot two-run shot to right-center field.

Los Angeles added a run in the fifth on a solo homer by Edwin Rios, his first.

The Dodgers tacked on a run in the sixth when Cody Bellinger tripled into the right-field corner, scoring Will Smith, and made it 5-0 in the seventh when Justin Turner drove in a run with a single against reliever Collin McHugh.

Atlanta scored its only run with two outs in the ninth against reliever Mitch White on back-to-back doubles by Matt Olson and Marcell Ozuna.

The Braves played without starting third baseman Austin Riley, who was placed on paternity leave to return to Atlanta for the birth of their first child. Travis Demeritte was recalled from Triple-A Gwinnett as a replacement, but Orlando Arcia started at third and went 0-for-2 with a walk.

Both teams are off on Thursday and return to play Friday. Los Angeles begins a three-game set in San Diego and Atlanta returns home for a three-game series against Miami.