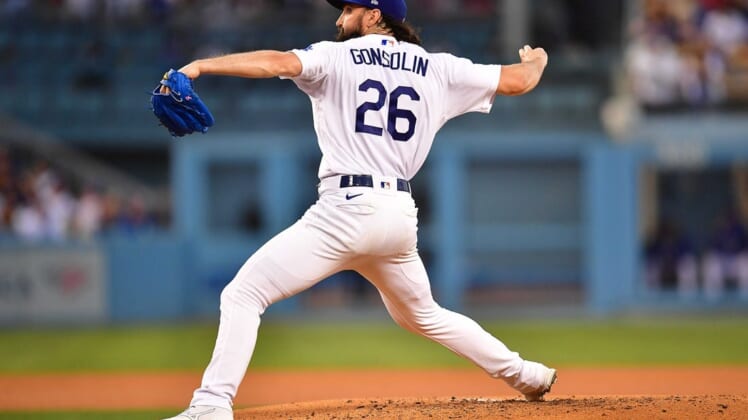 Tony Gonsolin did not allow a run over 6 1/3 innings and Mookie Betts homered as the Los Angeles Dodgers ended a three-game losing streak with a 2-0 victory over the Los Angeles Angels on Tuesday.

Gonsolin gave up just one hit, a fourth-inning single by Shohei Ohtani, as he got the best of a pitchers’ duel opposite Angels right-hander Noah Syndergaard, who gave up one run over just 4 2/3 innings.

Gonsolin improved to 8-0 on the season, tying the Houston Astros’ Justin Verlander and the Toronto Blue Jays’ Alek Manoah for the major league lead in the win. He lowered his ERA to a big-league-best 1.42 after giving up two walks and striking out six.

The Angels had just one hit through eight innings but loaded the bases with one out in the ninth against Dodgers right-hander Craig Kimbrel on a Mike Trout single, an Ohtani double and a Matt Duffy walk. Kimbrel then struck out Jared Walsh and Max Stassi to earn his 12th save.

Kimbrel threw 27 pitches in the ninth inning, which also included a nine-minute delay when plate umpire Nate Tomlinson was hit in the mask by a broken bat from Trout. Laz Diaz took over calling balls and strikes.

The Dodgers cobbled together some offense in the fourth inning with a one-out walk from Freddie Freeman followed by a single from Trea Turner. Will Smith worked a two-out walk to load the bases before Justin Turner’s full-count walk brought home Freeman.

The Dodgers started to make more noise in the fifth with a leadoff double from Chris Taylor, who then stole third base. With two outs, the Angels went to Jose Quijada against Freeman, and the left-hander reliever ended the threat with a strikeout.

The lead reached 2-0 in the eighth inning when Betts hit a one-out home run off right-hander Andrew Wantz, his 17th.

Angels third baseman Anthony Rendon left the game in the fifth inning after aggravating a right wrist injury that had him on the injured list from late May until last week. He was replaced by Duffy.

Angels interim manager Phil Nevin is 2-5 since taking over after Joe Maddon was fired last week.