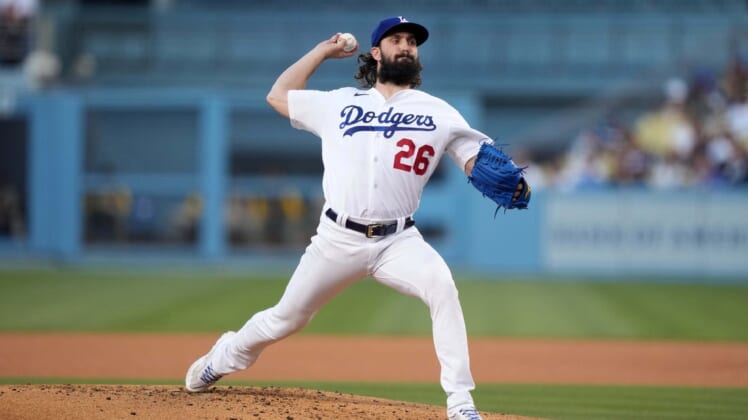 Gonsolin (10-0) continued his push to represent the Dodgers in the All-Star Game later this month at Los Angeles. He lowered his major league-leading ERA to 1.54 while becoming the first 10-game winner in the National League.

Trent Grisham hit a home run and Blake Snell struck out 12 for the Padres, who lost for the fifth time in their last six games. San Diego has been held to two total runs over the first two games of the series.

The Dodgers grabbed a 1-0 lead in the second inning when Muncy hit a towering home run down the right-field line, his seventh of the season.

Gonsolin kept the Padres off balance outside of a double to center field by Jurickson Profar in the third inning as well as Grisham’s home run in the fifth, just inside the right-field foul pole and into the second deck. It was Grisham’s seventh of the season.

Snell lasted five innings for the Padres, giving up one run on four hits with four walks and his highest strikeout total since he had 13 against the Arizona Diamondbacks last season.

With Snell gone, the Dodgers regained the lead in the sixth when Bellinger hit a home run to right field off right-hander Craig Stammen (1-1). It was Bellinger’s 11th of the season and third in his last eight games.

Freddie Freeman added an RBI double for the Dodgers in the seventh inning off Stammen. Los Angeles scored twice in the eighth on a sacrifice fly from Bellinger and a ground out by Austin Barnes.

The Padres’ Manny Machado had a planned day out of the starting lineup, one day after he returned from a sprained left ankle that cost him nine games. He struck out as a pinch hitter in the eighth.

The National League West-leading Dodgers improved to 4-1 against the second-place Padres this season and are 2-0 on a season-long 11-game homestand.