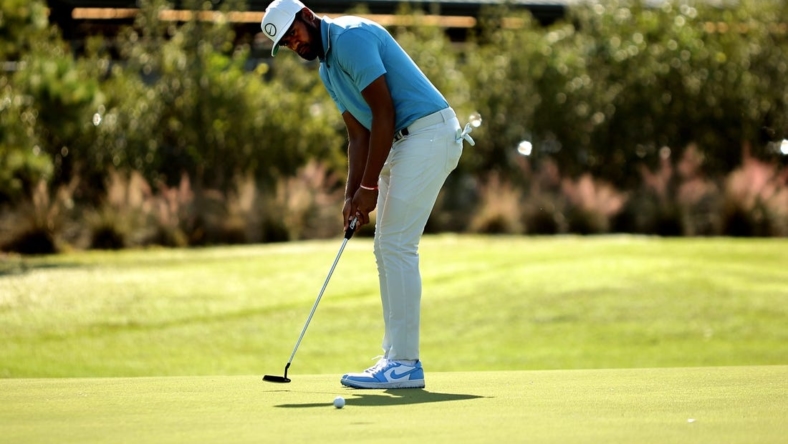 Tony Finau shot an 8-under 62 to take a four-stroke lead at the Cadence Bank Houston Open before inclement weather suspended second-round play on Friday.

Sixty-five players will have to finish their rounds Saturday morning at Memorial Park Golf Course before the 36-hole cut is made.

Finau held a share of the lead after 18 holes at 5-under 65. His round of 10 birdies and two bogeys Friday brought him to 13-under 127 for the event, four better than Patrick Rodgers, who shot a second-round 63.

“I finished 5 under on my last nine yesterday and I just rolled that momentum right into today,” Finau said. “I thought I made a huge putt for par on No. 1 and then I was kind of off to the races. I almost made a hole-in-one on No. 2 and just kind of cruising from there. It was a really nice round of golf.”

“I think these last 27 holes is pretty impressive on this golf course,” Finau said. “It’s not a golf course where we’re playing rounds and we’re like, we’re gonna light this place up, right? For sure out there today I do feel like I was in that zone and just able to execute golf shots and at the end of the day it rounded up to 62.”

At 9-under 131 is Rodgers, who started on the back nine Friday and shot a 5-under 30 on the front nine coming in. At the par-5 third hole, he reached the green in two, his second shot stopping just 2 feet from the hole for an easy eagle before three finishing birdies.

“I had great control today, which is wonderful,” Rodgers said. “It obviously starts with the tee shots. I was able to put the ball in the fairway a lot, which makes an enormous difference.”

Tyson Alexander shot his second straight 66 to get to 8-under 132. He was tied for third with Sweden’s Alex Noren, who was 8 under for the tournament and had three holes left to complete in his round.

World No. 2 Scottie Scheffler, a Texas native, was at 5 under for both the round and the tournament with five holes left to finish when rain halted play.

The projected cut was even par, though that was subject to change when players finish their second rounds Saturday morning.

Mark Hubbard was disqualified from the tournament for carrying and using a 15th club in his bag during his second round.