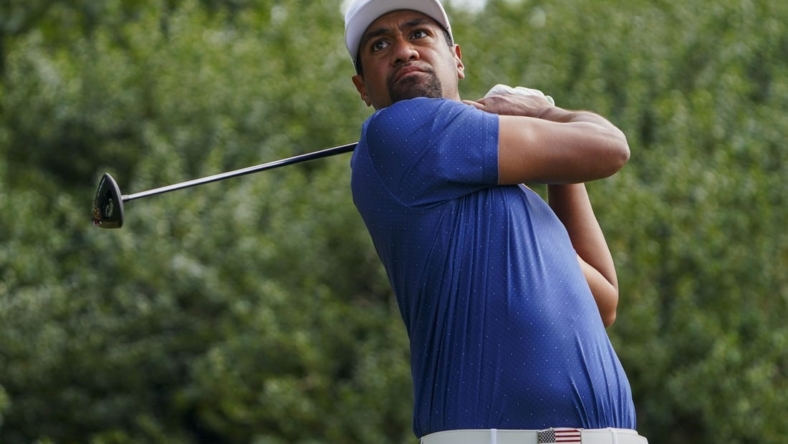 Tony Finau sank a 35 1/2-foot birdie putt on his final hole to shoot a 5-under 65, joining a tie for the lead at the Cadence Bank Houston Open when the first round was suspended Thursday.

Finau began his round on the back nine at Memorial Park Golf Course and made one birdie and one bogey. He heated up after making the turn and rolled in five birdies on the front nine, punctuated by a downhill, left-to-right putt that tracked straight into the cup at the par-3 ninth hole.

It wasn’t close to his longest putt of the day. Finau made a 59-footer for birdie at the par-3 second.

“I knew the golf course, it’s a tough golf course to play,” Finau said. “You have to drive it in the fairway and your work’s not done, it’s hard to hit the greens. You know if you miss the green, it’s hard to get up and down, so I was just patient with myself. I made a couple bombs — I think that kind of opened it up.”

Wise had a bogey-free card with four straight birdies at Nos. 3-6.

“I’ve just been in a weird place with my game where I’m obviously playing well enough to shoot good scores, but there’s just a couple shots a round that are frustrating me,” said Wise, the No. 34 golfer in the world rankings, who’s seeking his second PGA Tour victory.

“Overall, even though I let it frustrate me for a second or two, I did a good job of staying patient, kind of letting it go. And I had a couple great saves to shoot bogey-free. Sometimes you shoot bogey-free and you hit 18 greens and it was just an easy round. Today, it was bogey-free on the card, but it didn’t feel stress-free.”

Noren also started on the back nine and was even par through 10 holes before birdieing Nos. 2, 3, 4 and 6. He stuck his tee shot at the par-3 ninth to 8 feet from the pin to set up his final birdie.

“The whole thing about this course, anything under par is good,” Noren said. “Today I managed to make birdie on holes like 18, and 9 is a little tricky. You know, when you get those, it definitely helps, and you’ve got a couple wedges, but it’s a strong course.”

The four co-leaders are one shot ahead of a large tie at 4 under. David Lipsky, Wyndham Clark, Max McGreevy, Keith Mitchell and Canadians Mackenzie Hughes and Taylor Pendrith were in the clubhouse with rounds of 66. Zack Fischer and England’s Ben Taylor still had one and two holes to go, respectively.

Englishman Justin Rose was part of another big knot at 3-under 67. The veteran had six birdies but was hampered by three bogeys.

“Drove the ball well today. Hit the first 11 straight fairways, so I think that’s what you have to do on this golf course,” Rose said. “What I didn’t do well today was sort of some mid- to long-iron play and into these types of green complexes, you do have to hit pretty solid iron shots. If you do miss and you’re on the wrong side of a knob or a mound, it’s quite hard to get the ball up and down. So that’s just the little area I’d like to have done better today.”

Other notable names included Australian Jason Day, Gary Woodland, Zach Johnson and Italy’s Francesco Molinari at 1-under 69. The two most recent Masters champions, Scottie Scheffler and Hideki Matsuyama of Japan, were at even-par 70.