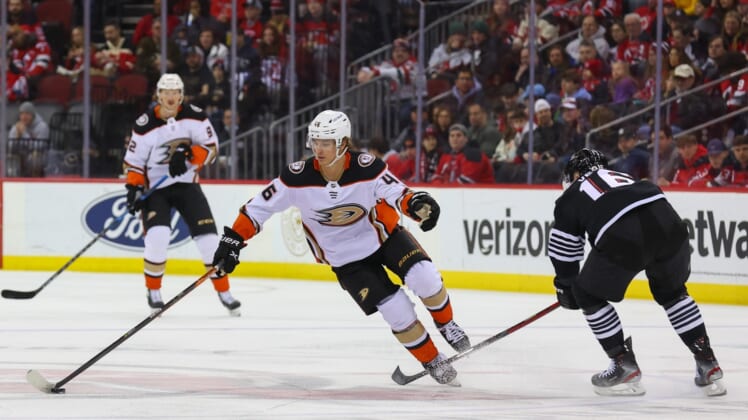 Tomas Tatar scored in regulation and again in the shootout to lift the New Jersey Devils to a 2-1 win against the visiting Anaheim Ducks on Saturday night in Newark, N.J.

Nico Daws made 33 saves and stopped both attempts in the shootout for the Devils, who have won three of their last four.

Troy Terry scored, and Anthony Stolarz made 39 saves for the Ducks, who have lost the first three games of their five-game road trip.

Max Comtois brought the puck out of his zone and made a cross-ice pass to Terry in the neutral zone. Terry carried to the top of the right circle and fired a wrist shot past Daws for his team-high 29th goal and 50th point of the season.

Ducks defenseman Josh Manson, playing in his first game since Jan. 29 because of a finger injury, also had an assist on the play.

Anaheim forward Isac Lundestrom overskated the puck as he crossed the New Jersey blue line and the Devils headed the other way. Jesper Boqvist took possession of the puck and skated through the neutral zone and into the slot before passing to Tatar on his right and he scored his 11th goal of the season.

The Ducks, who came into the game seventh in the NHL in power-play percentage (24.6), failed to capitalize on two chances with a man advantage early in the third period.

Getlaf and fellow forward Jakob Silfverberg continued to be out, however.

New Jersey appeared to lose defenseman Ryan Graves to an injury in the third period, but he returned.