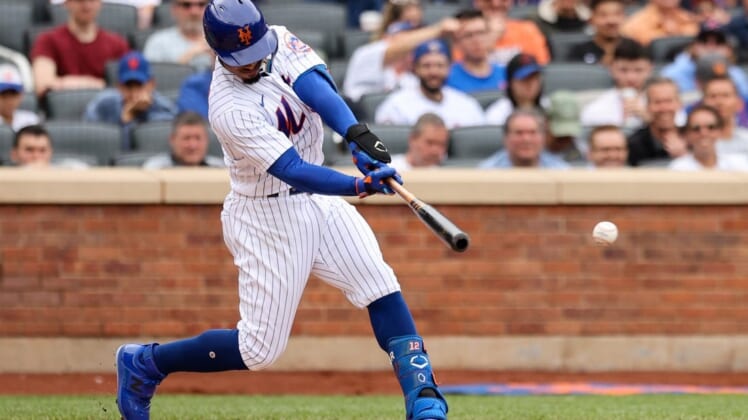 Tomas Nido had a career-high four hits, including the fourth-inning RBI single that broke a scoreless tie, and four New York Mets pitchers combined on a six-hit shutout as the Mets completed a perfect homestand by beating the Washington Nationals 5-0.

Nido finished with three RBIs for the Mets, who swept back-to-back three-game sets against the Philadelphia Phillies and Nationals — their first perfect homestand of at least six games since a 10-0 homestand in April 2015, the most recent season in which New York made the World Series.

The Nationals didn’t score in the final 21 innings of the series as they fell 17 games behind the National League East-leading Mets — the biggest deficit faced by any team in the majors.

Nationals starter Evan Lee (0-1), making his major league debut, and the Mets’ Carlos Carrasco (6-1) each danced out of trouble before New York scored twice in the fourth. J.D. Davis led off with a single and Luis Guillorme drew a four-pitch, one-out walk before Nido, the ninth-place hitter, singled to center.

Nido was credited with an RBI as Davis scored and Guillorme also raced home when centerfielder Dee Strange-Gordon overran the ball.

Nido also singled in the second and seventh before he delivered a two-run double in the eighth.

Francisco Lindor lofted a sacrifice fly in the seventh to extend his streak of games with an RBI to 10. He and Hall of Famer Mike Piazza are the only players in Mets history with RBI streaks of 10 games or more. Piazza had a 10-game RBI streak from Aug. 11-22, 1999 and a 15-game RBI streak from June 14 through July 2, 2000.

Josh Bell and Riley Adams had two hits apiece for the Nationals.

Lee, who was recalled from Double-A Harrisburg prior to the game, allowed two runs on four hits and three walks while striking out two over 3 2/3 innings