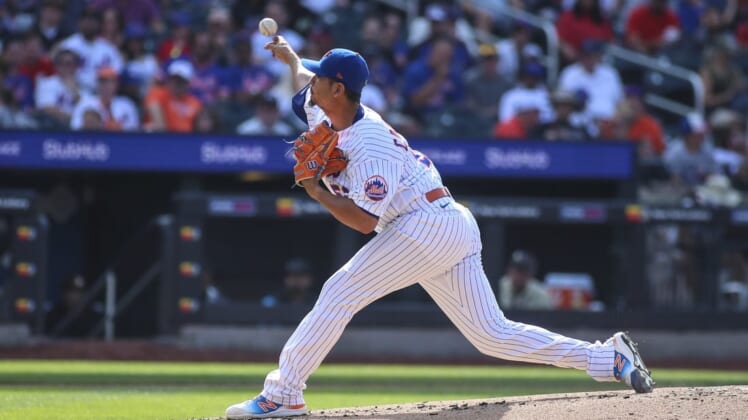 Tomas Nido had the game-tying RBI double in the 10th inning and scored the winning run two pitches later for the host New York Mets, who stunned the Miami Marlins 5-4 on Saturday.

Tanner Scott (4-3) struck out the first two batters in the 10th before Nido doubled under the glove of third baseman Brian Anderson to score automatic runner Mark Canha from second.

Brandon Nimmo followed by hitting a comebacker to Scott, who initially muffed the ball before bouncing the throw wide of first to score Nido easily, giving the Mets the dramatic win.

Colin Holderman (4-0) earned the win despite allowing an unearned run in the top of the 10th. Automatic runner Billy Hamilton went to third on a single by Jon Berti and scored when shortstop Francisco Lindor’s throw to third sailed by Eduardo Escobar, who didn’t cover the bag in time.

Pete Alonso snapped a scoreless tie by homering in the fourth off Braxton Garrett before the teams traded two-run rallies in the sixth.

The Marlins loaded the bases with one out against Carlos Carrasco, who gave up a single to Jesus Aguilar, walked Jesus Sanchez and surrendered a single to Avisail Garcia.

Brian Anderson followed with a double to deep centerfield to score Aguilar, but Sanchez was thrown out following a perfect relay from center field. Catcher James McCann appeared to tweak his left side while making the tag, and promptly exited the game.

The Mets reclaimed the lead in the bottom half of the frame when Nido hit a leadoff single and scored on Lindor’s two-run homer.

Aguilar homered to left field off Adam Ottavino to tie the score in the eighth.

Carrasco allowed two runs on seven hits while walking two and striking out five over 5 2/3 innings. Garrett also went 5 2/3 innings, surrendering three runs on three hits. He walked one and struck out three.